We don’t normally eat out for breakfast. Breakfast at home is usually a simple affair of coffee and toast. Sometimes when Suanne feels like it, she will make a couple of sunny side up eggs. That’s all there is to our breakfasts.

However, earlier this month we went to Bon’s off Broadway for their $2.95 breakfast. At that time, we thought that they have the cheapest breakfast other than the IKEA $1 Breakfast. We were so wrong.

Since then we discovered that there are more places where they have $2.95 breakfasts. Tana of the Cheap Appetite blog reported that Yummy Sushi in Vancouver also have a $2.99 breakfast. That one looked very good.

Last week, I also found another place which is serving $2.95 breakfasts. Samosa Garden, located on Kingsway just west of Boundary, is more known for their buffet lunches has recently started to offer breakfasts too.

They open for breakfast early at 7AM. I was the only customer the whole time I was there.

Samosa Garden used to be a very popular Indian buffet restaurant many years ago. In my previous company, we often chose to go to Samosa Garden when we have a team lunch or something like that. These days, I have not heard of anyone going there anymore. Instead, I know people are going to Saffron which is a couple of blocks away.

I remember that almost ten years ago Samosa Garden were so popular that the Malaysian Prime Minister actually ate here when he was in Vancouver. 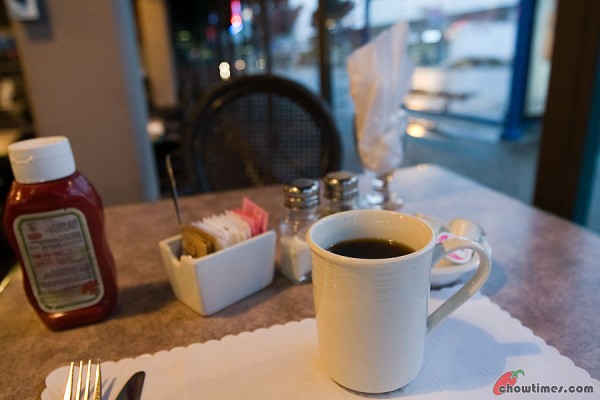 The setting was good. It was dark, cold and raining outside the morning I was there. It sure felt like Fall these days.

With being the only customer, I felt unrushed. It is just the way I love to start the day — slow and unrushed. 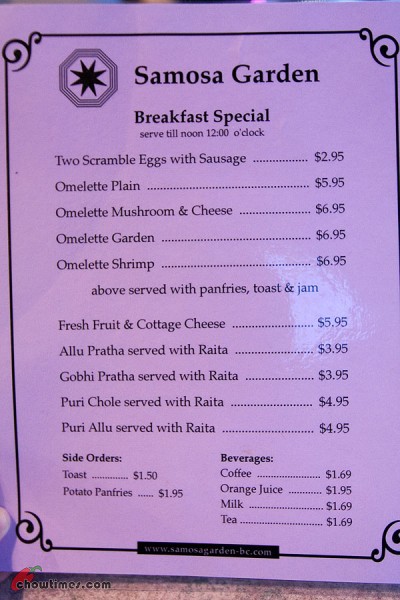 The breakfast consists of scrambled eggs, two sausages, hash browns, toasts and interestingly, sweet grapes too. The breakfast was quite good. The two sausages is small and tasted just right without the denseness and saltiness that I sometimes come across. I like the sausage.

The toasts were lightly buttered and toasted crisp. They gave me peanut butter and fruit jam on the side. I did not bother with the jams because the toasts were already good as is.

The hash were made in cubes. It was very soft on the inside. This is good that I don’t need ketchup for this. 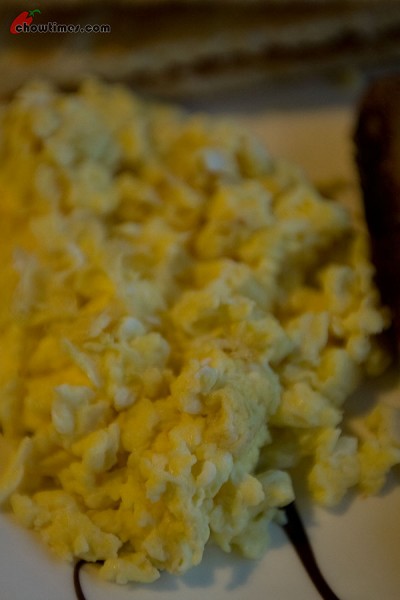 The scrambled eggs is my least favourite way of having eggs. Although it is made into nice small soft curd and moist, it was bland. A bit of salt and pepper did the trick but I wish they have soya sauce. I much prefer sunny side up eggs.

Between Samosa Garden and Bon’s, I like Bon’s much better. You be the judge now … here is the comparison of the three $2.95 breakfasts. Tell me which one of these $2.95 breakfasts you think looks more inviting.