I posted about funny Chinese dish names yesterday. Today it is about a Chinese restaurant with an uncommon name – Negative Space. 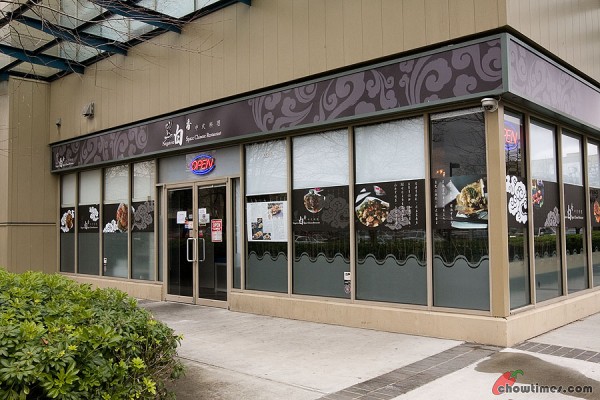 Negative Space had been operating since April. This space used to be where Hai Jun is which was one of our favourite restaurants.

Negative Space is located in the Pacific Plaza on Odlin Cresent and McKim Way. It looks very contemporary in black and grey with pictures of their food on the windows. Walking past it, it does look inviting and will definitely make one take a second look at what they offer.

The interior looks smaller but cozier than what we remember from days of Hai Jun. Maybe it is because they partition the area into some sections that is semi-private. There is this one corner that seats six, maybe seven, people that I thought was a nice touch — it has throw pillows and is partitioned from the rest of the restaurant.

We immediate like it. The place is clean and looks brand new.

The menu was interesting with quite a wide variety of food types. We could not quite put them into any particular category of Chinese cuisine. So we asked and they told us that they serve Chinese fusion food taking the best of all the cuisines offer. Fancy description, so we thought.

One particular item that caught our eye is the Japanese Kobe Beef. It costs $35 per ounce and you need to order a minimum of 5 ounces. You do the math! I was curious if anyone actually will spend that kind of money in a restaurant like this.

I wish I had taken the picture of the menu to share with you but I can tell you it is very interesting. We found it hard to decide what to order and changed our minds several times before finalizing on what we wanted.

The food did not disappoint.

Suanne initially wanted to get the Spicy Pork Belly but ended up getting the Negative Space Hot Pot. This item is not on the menu but we saw one table having it. So we asked for it because the soup looked so rich. 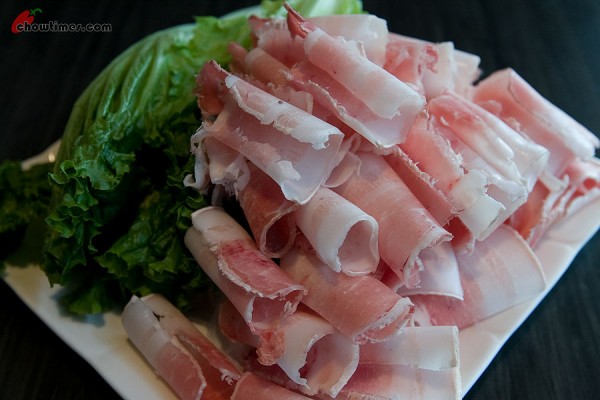 We get a choice of either pork, beef or seafood to go with the hot pot. Suanne opted for the pork which came nicely curled in a separate dish. Presentation wise, it does look really nice.

to complete the servings. However, this hot pot is rather expensive. It is $16. Suanne remarked that for that price you could basically get all-you-can-eat hot pot in many places.

The waitress did warn Suanne that it will be a little spicy. Hah! It was actually very very spicy, not a little spicy. It is like Szechuan soup with lots of chili and tongue numbing Szechuan Pepper Corns! Despite that it was something both Suanne and I enjoyed a lot.

As for me, I ordered from the Set Lunch section of the menu. Since it was a cold day, congee was just exactly what I needed. So, I opted for the Congee with Fresh Crab which costs $9.50.

This is the type of congee I like … grainy and not mushy. It had quite a fair bit of pickled vegetable which added flavor to a normally bland congee that you find in many places. With their congee, I did not need to add soya sauce or ground pepper at all.

There are only a couple pieces of crab meat. They tasted fresh but not fleshy enough to satisfy me.

Since this is a set lunch, the congee came also with a bowl of soup (which is not necessary to go with congee!), a turnip omelette (quite OK) and vegetables (not nice because it was not warm). For $9.50, we thought it was worth the price.

Nanzaro is getting conscious about prices these day. He was eyeing the Deep Fried Tiger Shrimp and then sheepishly remarked that it is so expensive. We know he wanted approval so we ordered that for him. He later told us that it was expensive because the shrimps costs $9.50 and it does not include rice which came extra at $1.50. 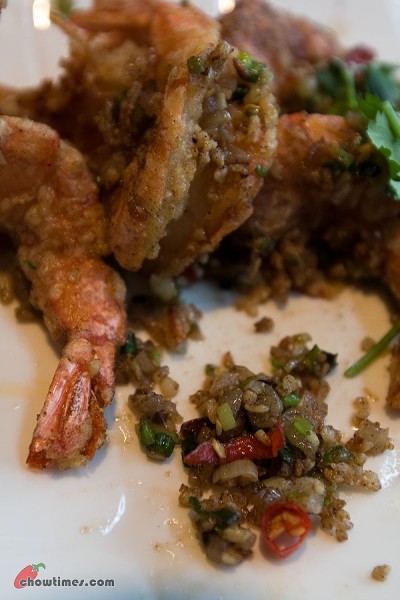 Their prawns were awesome and so very nice deep fried that you could even eat the shells if you want. The best part is that there are loads of garlic-onion-chili bits that went ever so nicely with steamed rice. 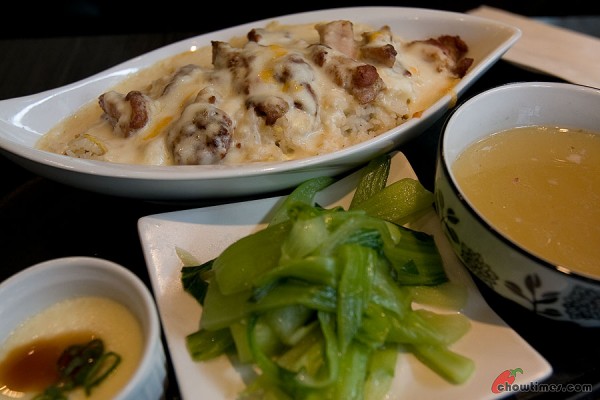 Arkensen ordered something Hongkong’ish … baked rice. It is from the Set Lunch and is called the Baked Chicken Thigh Rice with Creamy Cheese Sauce ($8.50).

Suanne and I are not fans of HK-style baked rice but this one is surprisingly good. It does not have the thick creaminess that we hate especially when it is cooled down into sticky gooey mess. Instead, it was quite light and remain consistently moist throughout.

Arkensen has the same sides as I did with one exception. He has a small bowl of steamed egg. It was savory and nice but somewhat coarse. Suanne makes much smoother ones at home.

We like Negative Space and will definitely come back again. Their prices are slightly higher but their quality is also better too. It is worth asking them for any dishes that is not on their menu, especially their hot pot.

They accept credit cards for bills above $20. Anyway, the map to their location is found on the menu below. This is just the Take Out Lunch Menu and shows a small subset of what they have to offer. 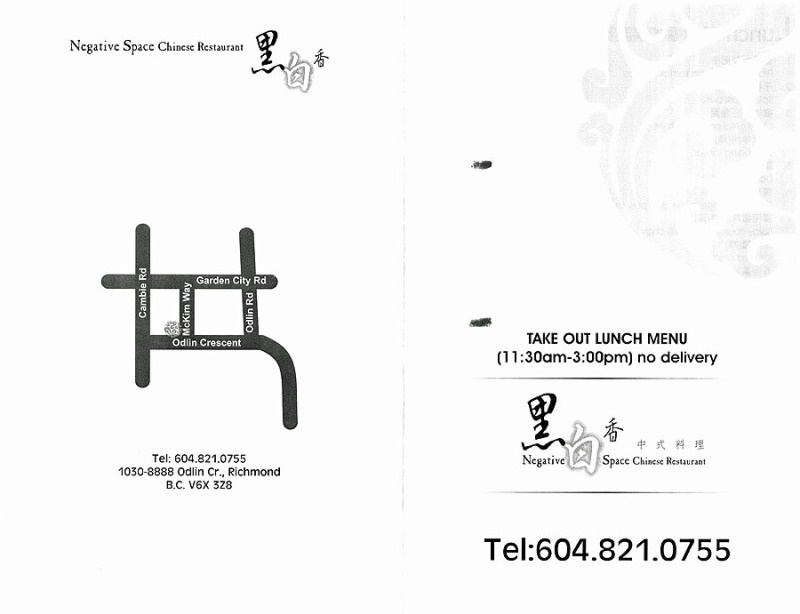