Life is good — especially not having to work on Fridays.

So, after the boys went to school, Suanne and I went to have a real nice breakfast. I just love those unhurried mornings. It is unhurried because it felt like a bonus day off and I had nothing specifically I need to do.

The Medina Cafe is located just next door to the Belgian restaurant, Chambar (our previous reviews here and here). The address is 556 Beatty Street and is just outside from the Stadium Skytrain Station.

Look at the stacks of food by the window (above). That is what Medina Cafe is known for … Belgian Waffles. 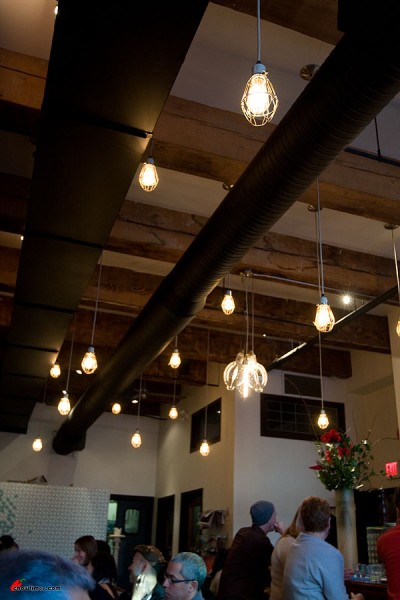 Suanne and I went to the Medina Cafe. We had been wanting to go there for a long time but could not because … well … it is not exactly a conducive place for a family breakfast. I don’t know, I felt it has a Parisian Cafe feel to it.

The Medina Cafe is super busy. They will only take reservations for parties of six or more. So if you are in a smaller party of six, you could be in for a wait during mid mornings on weekends. I have heard that waits could be up to 1 hr.

We did not have to wait. We were early. Moreover, it was on a Friday. But we got a really crappy table. It was the only one clean and it was by the door. So, each time someone walks through the door, the freezing draft hit us directly. We had our coat on the whole time. 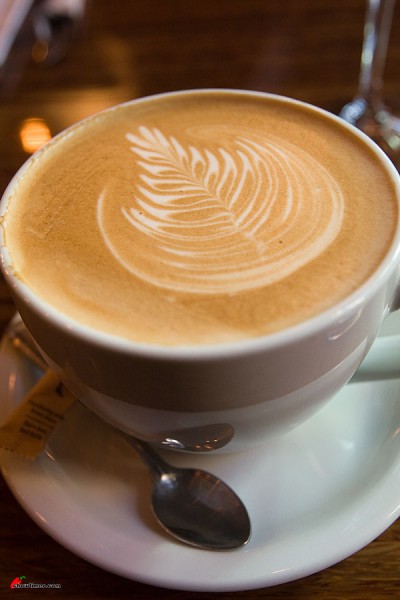 Suanne had coffee — the largest 16oz Latte which is $3.60. The latte was … well just latte. I had always wanted to learn how to do that fern thingy.

I tried to be fancy right?  So without knowing what it really is, I ordered the Moroccan Mimosa.

The menu said that it is “Fresh OJ infused with cinnamon and fig”. No mention of alcohol.

Mimosa as I learned later is a mix of orange juice and champagne. Not nice. I did not like it. I just felt that liquor and orange juice is not a good mix. But I finished it nevertheless. The reason is simply because this is $8.

The Medina Cafe serves breakfast and lunch only. Breakfasts starts at 9AM to Noon while lunch is from Noon to 3PM (4PM on weekends).

The menu is not very big. Two columns … one for breakfast and one for lunch. That’s it. But each item is interesting and so it was hard to choose.

Service wise, not good. They are busy and you need to flag them down if you wanted anything extra. But when you got their attention, its OK.

As simple and humble the Belgian Waffle is, this is the hero of our breakfast. This is what we were here for. It is $3.15 for the waffle and an extra $1 for the fig orange marmalade.

But the waffle is so … small! It was good but small.

I really got to hand it to them. They simply make the best waffles in town. The thing is, you should go to the Medina Cafe early to get it when it is just freshly made. Early as in 9AM.

Makes your mouth water doesn’t it?

The Medina Cafes is known for their pretty and hot breakfasts served on cast iron pans. Their platting is really good especially when you contrast them with the pile of food you normally see in chain breakfast places.

Not knowing what to order, we thought that if we went with the most expensive item, it should be good. That item is called the Fricasse and costs $15.

The eggs are beautiful and delightful.

The thick grilled Foccacia was equally interesting. Can anyone tell me what is the main difference between a Foccacia and a normal bread? They seems the same to me.

This is a rarity … Suanne eating eggs. She hates eggs, especially egg yolk. I think she likes the foccacia.

While the rest of the stuff in the pan was OK but I felt what spoils this was the beef and the sauces. It was too salty. It was so salty that I thought it was kind of weird, like they made a mistake or something.

The bill came to $33 before tips. Although I can’t categorize Medina as expensive, I have to say it is not cheap.

Ba Le Deli and Bakery on Kingsway and Fraser, Vancouver

Kingsway Sushi on Kingsway and Boundary