For some reason we had not gone to the Brighouse Square strip mall for anything other than the rare trip to Staples or pickup some pastries from the New Town Bakery. 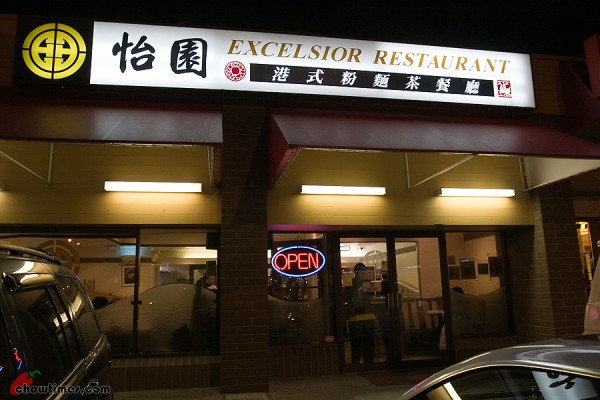 I could be wrong but I assumed that Excelsior is a long timer in Richmond. It opened in the days when there were more HK immigrants.

What I find strange is that there is only ONE review on Excelsior (by Yum-O-Rama) and nothing on Dinehere.ca, Urbanspoon or Yelp. And yet when we stand in front of the door, we see impressive age-faded newspaper reviews showing high-end food. Those must have came from their glory days.

The place was absolutely full. It was so unexpected. The first thing they asked is if we had a reservation. When we said no, they hesitated for a moment and then showed us to the crappiest three-seater table by the corridor which connects two separate dining areas.

We were not unhappy about it really. Just glad that they gave us a table. Boy, was this restaurant popular!

A lot of their customers are families. Many of them are multi-generation families out for a family dinner. 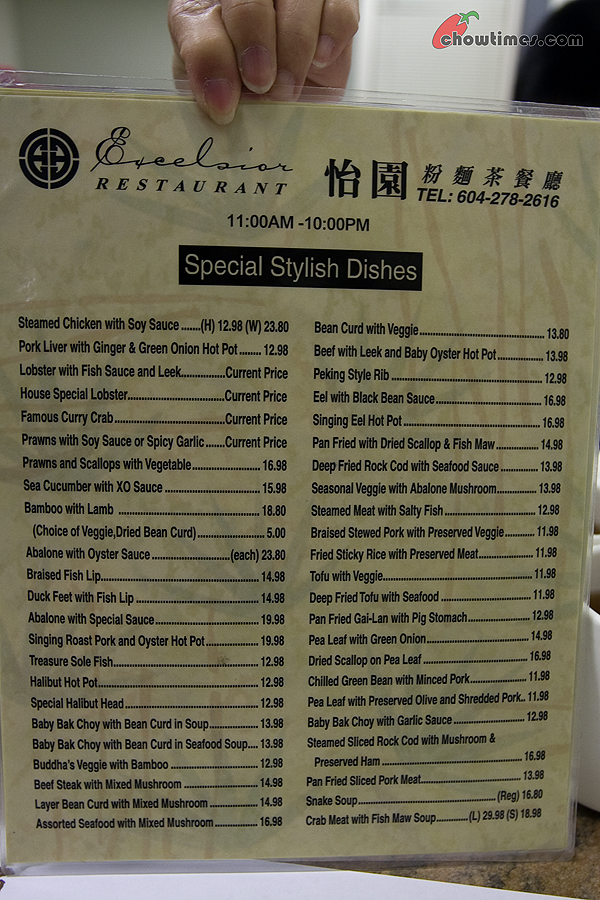 Excelsior is decidedly Cantonese. I just can’t classify them properly. The decor, tables, chairs and even the bowls shows their age and had seen better days. At a glance, they are like any HK Style Cafe. But they don’t serve the normal HK Style Cafe fare.

Their menu was exciting. At least to us it was. There were so many new things that we had a hard time deciding. Looking at the variety on menu, Suanne said that it looks like we are going to come here several more times. The prices are on the higher side compared but quite affordable.

We discarded the main menu and focused on the two that says “Chef Recommendations” and “Special Stylish Dishes”. That is their more popular dishes. We took an awfully long time to decide what we wanted. We shortlisted EIGHT dishes but forced to narrow it down to three since it was just three of us at this dinner.

Service was OK. It was fast … rushed and somewhat impatient. After all, it is a HK restaurant. What do you expect. At least they were not rude. They are not really good with English for sure. We ordered with the English names and they had to cross check it with the Chinese name at the back of the menu.

They came by with free soup. I am not sure how it works and if everyone gets this regardless of what is ordered. I see every table getting this.

It was a nice touch. Not many restaurants does this anymore. The soup was flavourful. It even had boney pork pieces in it. 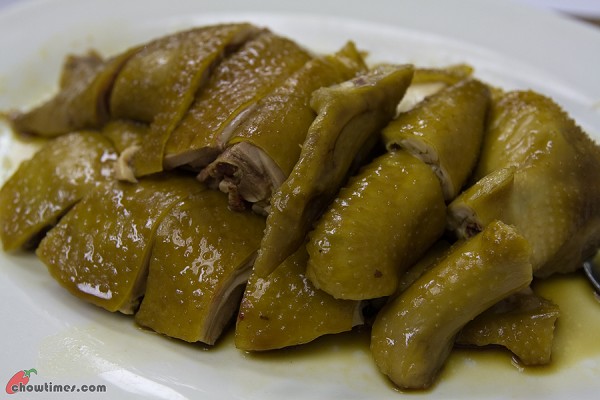 Most tables ordered this. We figured this must be their specialty.

This is called Steamed Chicken with Soy Sauce. We had the smaller portioned half-chicken ($13). The whole chicken is $24.

It was simply the best we had ever tried. Bar none. Such simplicity … such simplicity that they don’t even care to … garnish it. It is just chicken and soy sauce — in perfect harmony. 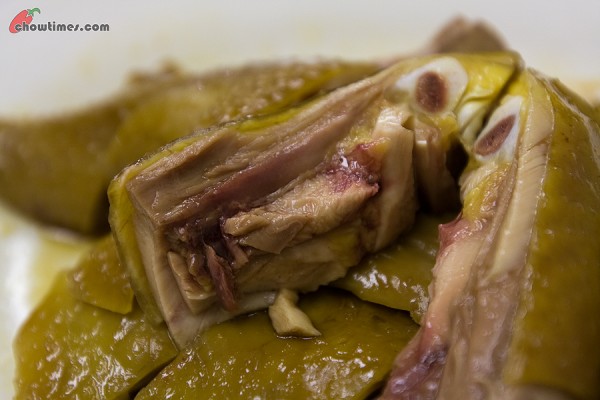 The meat was boney. It would have been better is there are a lot more meat. They were made perfectly. Just look at the red-pinkish-blood color of the bones.

The chicken came first before everything else. Not waiting for the other dishes, we each took a piece to try … and another … and another and before we know it, it was already half gone. 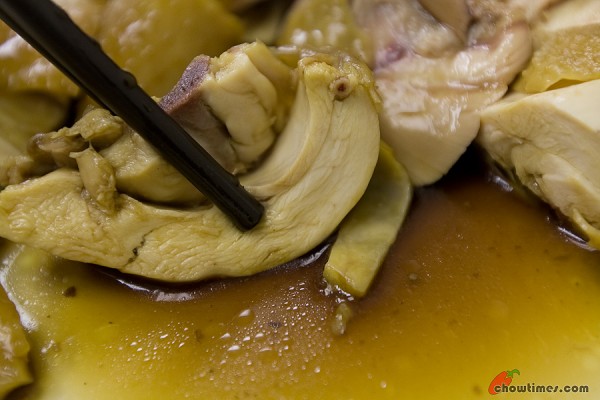 The tip is to eat while it is still warm. The remaining pieces towards the end of the meal does not have the springy texture anymore, perhaps because it’s the chicken breast that was left behind. This dish wow’d us.

The Fried Sticky Rice with Preserved Meat sounded nice. Instead of getting steamed rice we decided to get this instead.

This is $12. This was equally great. So full of flavour with peanuts, eggs, chinese sausage and mushroom as its primary ingredients. It has a texture quite unlike other rice dishes. That is what makes this so unique. Nanzaro simply loves this. He was quite unhappy when we over-ruled him getting fried rice but he was very happy with this when he tasted this.

We thought that the Baked Salty Pig Stomach sounded new to us.

This is $11. It came wrapped in aluminum foil. They cut it open in front of us and the steam released was interesting. While we like the chewiness of the pig stomach, it was also very salty. They did not marinate this or anything but had just ginger, green onion and shallot for flavour.

We had earlier wanted to order the item called the Famous Curry Crab but it was too much and expensive for the three of us. The smallest they can make it is 3lbs and it costs $11 per pound. We will come back someday to have this with a bigger party. 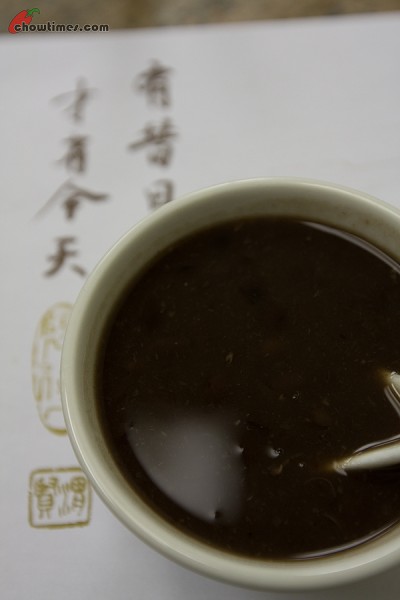 After given free soup for starters, they also gave us free red bean soup too. It was good. Not watery and it even had a strong tangerine peel taste. They made this well. 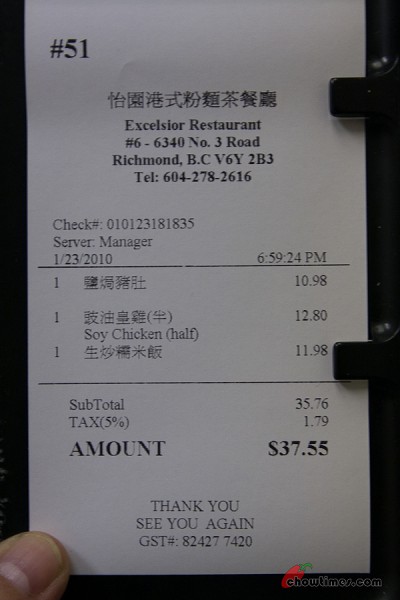 We enjoyed this meal. We will definitely come back again some day.

The food was not visually stunning. As a matter of fact they looked so dull. Looks aside, they were superb.

Despite the lack of reviews on the internet, I am sure some of our readers know Excelsior well. If you do, what are some of the dishes that is a must have here? I know that they had won awards for being the best in making Alaska King Crab. The next time it is in season, you can bet Suanne and I will make a bee-line for this place.

Oh … they accept cash only. Looking at their prices, you better bring wads of cash if you are going for their more expensive dishes. 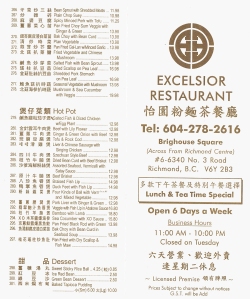 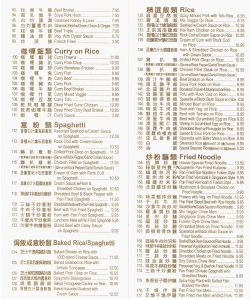 Thai Kitchen on No 2 and Blundell, Richmond