This was a few weeks ago when we had dinner with Christina, ET, TS and JS at Mis Trucos.

During the dinner, Christina told us that there is a Ramen Instant Noodle that tastes just exactly like what you would get at Kintaro’s. I find that hard to believe to tell the truth. Would you?

But I think Christina is a super sales woman in her past life or something like that. She is like the salesman who can sell a comb to a monk. After the dinner, the next thing she did was to send us an email with a picture of that packaging!

She was so convincing and persuasive that I felt like that monk. I just got to check that out!

The problem is the packaging is all in Japanese and we don’t even know what it is called. So, I printed the picture of the packaging (above) and went to look for it in T&T. Christina said that this could only be bought from T&T or Osaka supermarket. She even said that it is “located near the end of the aisle that is closest to the cashier and that it is on the 2nd rack from the bottom”. Aren’t you just amazed with that? LOL!

So, with the picture in hand, I went to look for it in the T&T in Metrotown after work. It was not easy looking for this because every other instant noodles bowl looked the same.

After like eternity, I finally located one that looked like it. But the box is different from the picture that Christina sent me. You know how I confirmed this is the right one? I cross checked the bar code.

I can’t read Japanese … can anyone tell how this is pronounced?

This ramen is expensive. It is $3.80 a bowl. And there was only one bowl remaining on the shelf. Despite the price, I think this particular brand must be popular. 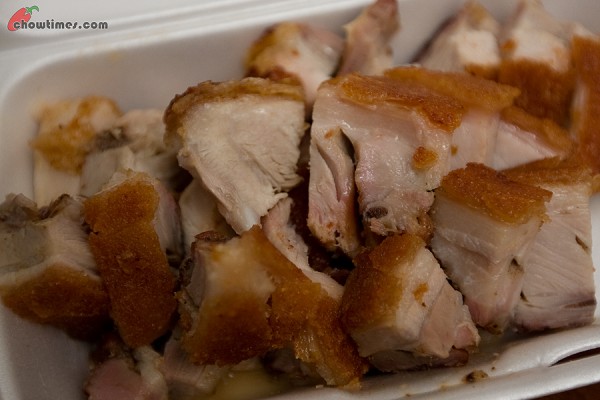 On the way home, I deliberately stopped by the roast pork shop in Parker Place to buy a pound of roast pork. I wanted to make that ramen a bit more like Kintaro’s ramen which has char su too!

I like the roast pork from Parker Place the best. They are consistently good. Often there is a line of people waiting to buy from their roast pork. Last Chinese New Year, we waited in line for one hour (!).

Peeling back the lid, it looked just like any instant noodle bowl except that there are some dehydrated vegetables pieces (wood ear) and some kind of dehydrated meat like stuff (perhaps vegetarian meat) in it.

For flavoring, there are three sachets … one for the soup base, one with more dehydrated garnishings (green onion and sesame seed) and another with oil. 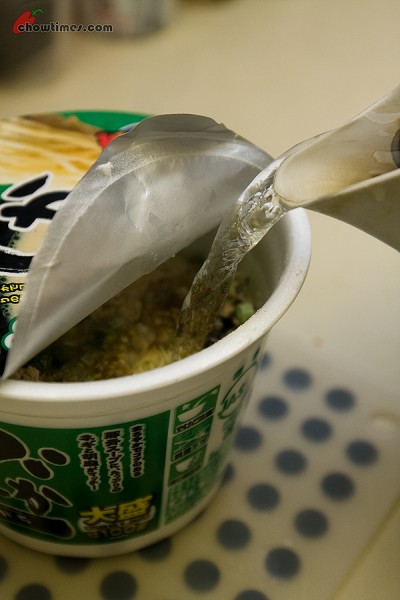 Since we could not read the Japanese instructions, we figured we just pour boiling water and then cover for 2-3 minutes.

…  when we peeled the cover.

A quick stir and a few pieces of roast pork added, the broth does actually taste very decent. The broth has that richness and cloudiness that one expect from a good bowl of pork bone broth.

It is a stretch to say that this rivals Kintaro’s ramen. However, this will be a really good bowl to keep in the drawer in the office for the times when I have a craving for ramen.

Suanne added some fried shallots to the bowl. It was awesome!

Too bad we ran out of sambal or else we would added that too to make it a bit spicier.

A bowl of this is 600 calories which is quite OK for a meal — not too high. 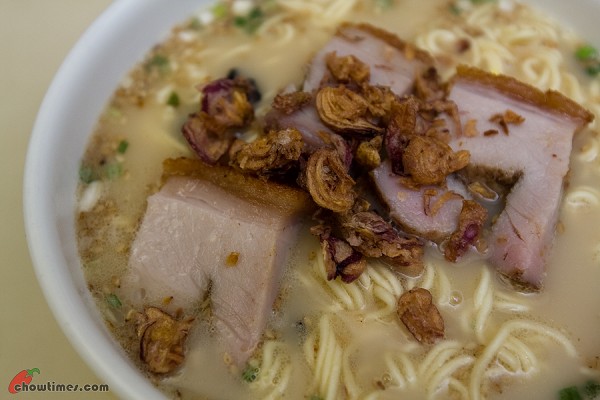 So, now I have a bowl of this stashed in the drawer at work.

This ramen is good … but no, it is not equivalent to Kintaro’s.