Update 17-April-2011: Per comments below, this restaurant is now closed. Shanghai Village may or may not reopen in another location

If you ask me where to go for Shanghai food, I will tell you straight up that you need to look no further than Richmond. This is because there are so many highly rated Shanghainese restaurants. Just to name a few at the top of my head:

While there are some good Shanghai restaurants elsewhere in Metro Vancouver, Richmond can lay claim to the most-est and the best-est. Well, move over Richmond … there is one in Vancouver that is gathering rave reviews everywhere.

When the chowhound community was creating a buzz on Shanghai Village, frankly I was rather unconvinced. Part of me was really thinking that it is just hype. After all, if you have dined in Richmond’s Shanghai River or Shanghai Wonderful for instance, you would have thought you’ve seen it all.

I was really impressed the moment I walked into the restaurant. The floors are beautifully carpeted and the chairs are plush. Even the table cloth are embroidered ones. I even saw that the lazy susan on the bigger tables are gold plated too … that is something I had never seen before. 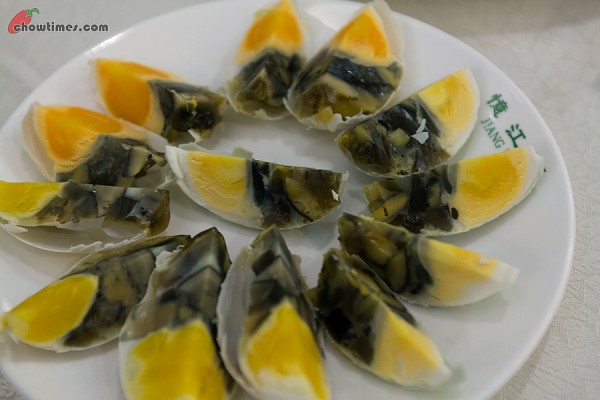 Keev and Dylan was already there and had ordered some food. Oh wow, I was completely mesmerized by the Preserved Egg with Salted Egg Yolk ($6). 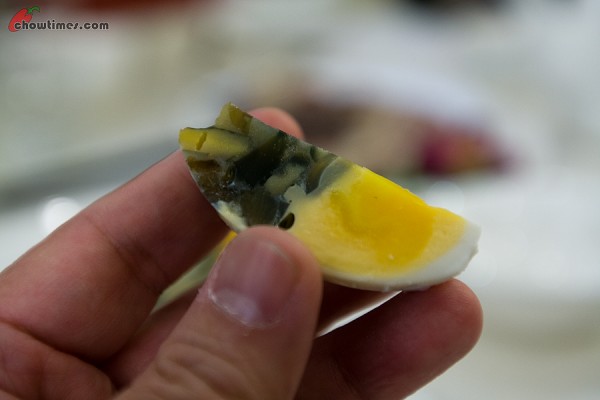 Apparently this is an assembly of the century eggs and salted egg yolk. It is certainly not something I had ever seen in my life and I though it is fantastic.

Keev figured that they cracked the top of the egg removed the egg white and then refill it with pieces of century eggs. 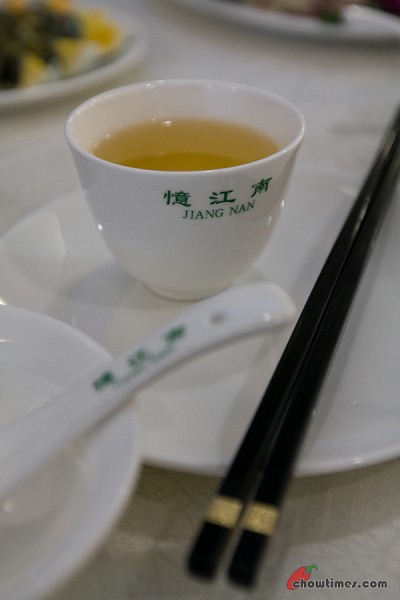 The name Shanghai Village does not do justice to this restaurant. I have come to learn that the English names of Chinese restaurants are nowhere as poetic as the names in Chinese.

The Chinese name of Shanghai Village is something like “Reminiscing the south of Jiang river”. That word “Jiang” is key to the next series in the 8GTCC adventures.

I did not get pictures of their extensive menu. It was simply too many pages. If I had taken shot of every page, it would freak the restaurant out … not to mention the 8GTCC team for fear of being thrown out of the restaurant (is that right, guys? LOL!).

The above is their House Specialties section. See the first item on top? 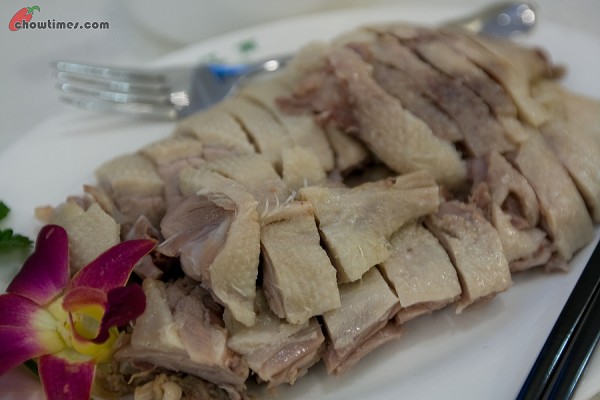 That is the Nanjing Specialty Marinated Duck ($12). The ducks of Nanjing is world famous and Shanghai Village does it perfectly.

Lightly salted, it is served cold and the meat was surprisingly highly delectable. This is something that I could eat many pieces of and not stop.

Their other specialty is what they call Crock Soup. This is the times I wish I could read Chinese. Look at the picture on the left above. That page of the menu describes the Crock Soup and you see that the Chinese description is lengthier than the English translations.

Anyway, if you look at the menu at the right (click on it to see larger image), they have 35 types of soups! The soup ranges from $12 to $24 and some of them require 1-day advance pre-order.

They must be very proud of their soup. At the entrance of the restaurant, they have a crock pot (should we call this an urn or a clay oven?). This is how the soup pots are placed in it. The waitress was explaining to me how it worked but I thought I heard her say they uses coal or something. Anyone? 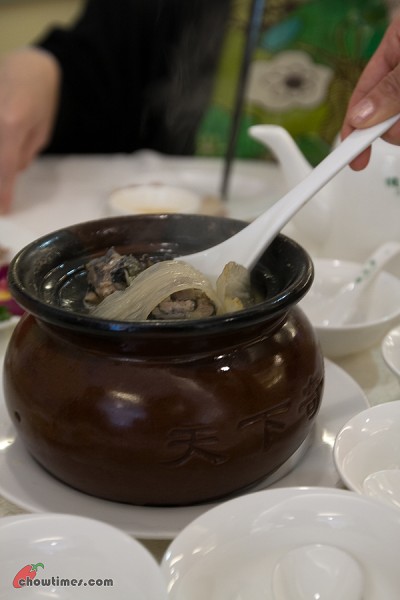 So we got the Silkie Chicken in Herbal Claypot Soup. This is $17 and … it was enough for the five of us.

Silkie chicken are a cute fluffy chicken. They are considered as unpalatable to western cuisine but to the Chinese this is gourmet. 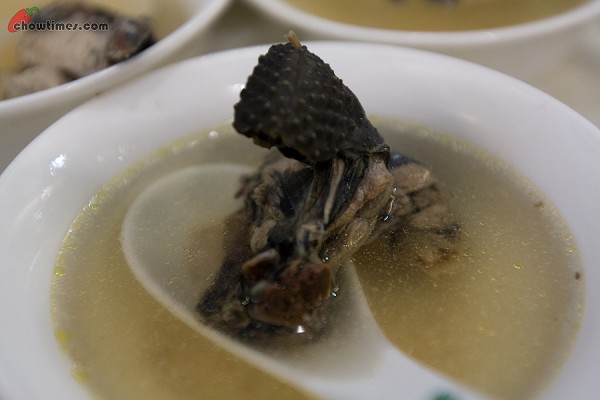 The chicken meat is tough and greyish and the skin is always black in color. So it does look unappetizing.

Despite that, the soup is flavourful and I think you will like it. Our waitress made sure she mentioned that “there is no MSG”. 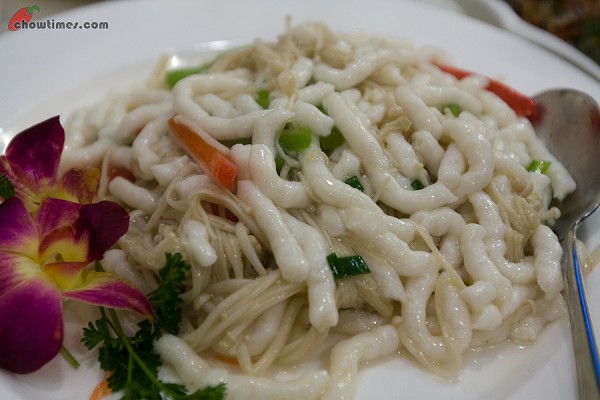 A few weeks ago, the Chinese Restaurant Award people recognized Shanghai Village for having the Most Innovative dish in 2010.

The dish is called Fish Noodles with Enoki Mushrooms ($14).

Our waitress said that there is “no flour, only fish”.

Yeah, it looked like noodles and has a bouncy texture. Really, I can’t tell it is fish meat. The dish is unique and innovative, that much I give them. While it was not great-great, it was good. It was a good dish to order and see what it is like. 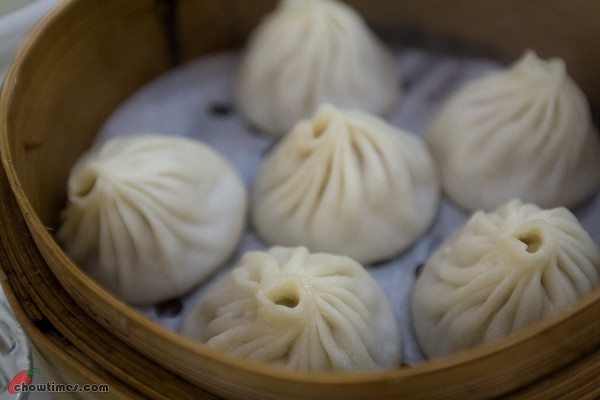 To me, a respectable Shanghainese restaurant must make great Xiao Long Bao (XLB). Dylan argues that people should call this tang bao (soup dumpling) and not XLB, saying that the rest of China calls it Tang Bao. It is only the Shanghainese that calls it XLB.

Did you notice one thing that is unique about the XLBs (OK, Tang Bao) above? They have little openings on top. The first I see it like this. I was thinking it is not easy to make it like this — it needs kung fu.

You can suck the soup up from the top with these XLBs (OK, Tang Bao) instead of tearing the sides to drink the soup first.

I noticed that the skin is not too thin where it is almost translucent but I find it good … very good. I consider this one of the best XLBs (OK, Tang Bao) in Metro Vancouver.

Oh yeah … it is free if you spend above a certain amount. I can’t remember how much.

We must order eel because this is a Jiang Nan restaurant. The region is a major producer of eels. The restaurant brought the eels out for us to see.

You know, in Chinese restaurant, if they bring live seafood out for you to see before they cook it, you can almost assure yourself that it will be expensive. We wasn’t thinking.

The Yellow Eel dish above is over $40! Looking at the number of pieces that is served, I reckon that each piece costs $1.50. It is a dilemma … this dish is so representative of the cuisine but it is expensive.

The eel had a nice soft texture and superb flavours. It has a bit of fine bones in it. All of us complained the use of bell peppers. Chinese food worth its salt must NOT use bell peppers. 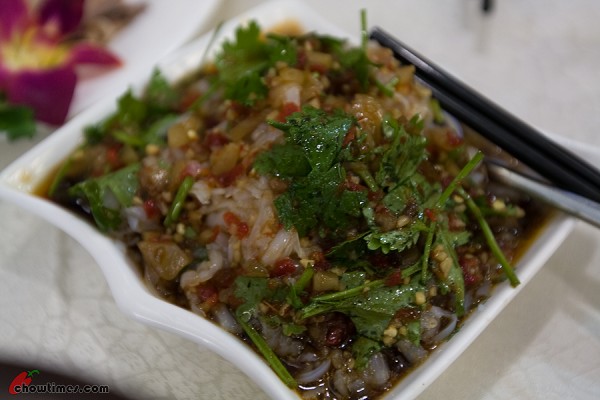 The Special Green Bean Jelly above is $6. It is nice and have a spicy slash sourish taste.

Anyone can tell me why this is call green bean jelly. I hazard a guess that it is very much like transparent noodles made from mung bean starch.

The above is called Steamed Salted Pork with Beancurd Sheets, $13.

I like this, particularly the bean curd sheets. I personally don’t fancy the salted pork bacon which tastes like Chinese sausage.

You know, one thing about eating with these professional foodies … they always talk about nerdy stuff like is the bacon cured or smoked … or is it cured AND smoked … or did they cure it before they smoke it … or was it the other way around.

Spare me the details. LOL! For me the pork just tastes like Chinese sausage.

This next dish called the Steamed Tofu Slice caught my fancy. This is $13.

Underneath the plumb prawns, pork and ear fungus is something that looks exactly like noodles.

But it is not noodles. It is tofu sheets cut into strands like noodles. The noodle has an unique texture which is something I like a lot.

The soup is light. For me, I would call it exquisite. Suanne wasn’t there for this dinner but if she was here she would pooh pooh this as bland. She thinks that everything must be spicy or have a bold flavour to call the food nice. I know I have better taste than her even though she ignores me when I say that. 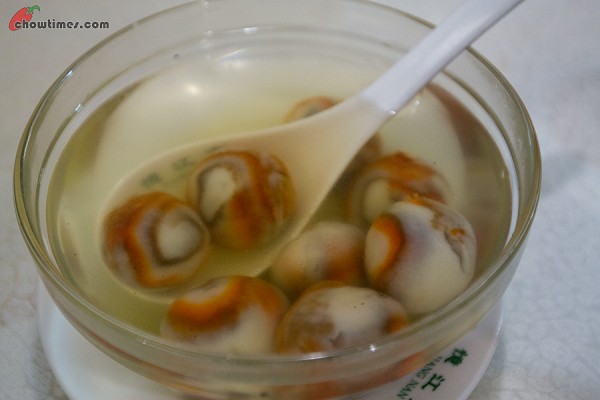 The dessert amazed me (OK, I am easily amazed).

It is called the Marble Sticky Rice Ball and is $8.

What I enjoy most about eating is when I get to learn about the food I eat. If I am served with the dessert above, I would just note that it is pretty and the proceed to gobble it down.

But when the waiter came and showed us the unique Nanjing colored stone and how this dish is made to look like it, that I enjoy learning.

We were told that the stones turns a nice hue of red when soaked on water and turns greyish when dry.

The broth is very light. It doesn’t have the strong sweet taste to it which I appreciate a lot.

But the Ball is really good. I can eat the whole bowl by myself.

It is flaky. It is sweet. It is warm. It has sesame seeds which give it the fragrance. It looked empty inside but it is sweet. 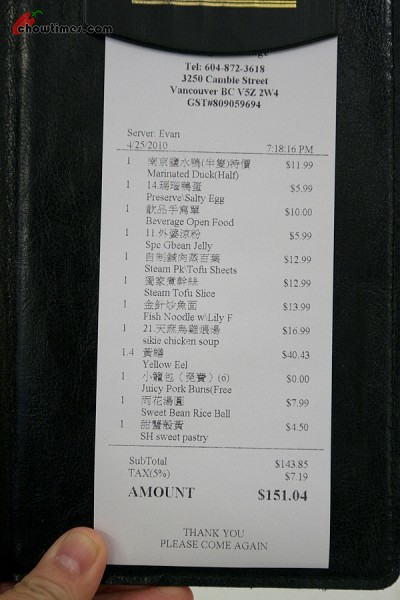 We had a bit of a sticker shock when we saw that bill. Between the few of us, it worked out to be about $35 per person after taxes and tips. On closer examination, the culprit turned out to be the $40 Yellow Eel. Take that item away, it will be in the high $20’s for each of us.