Don’t judge a book by its cover. That’s what we often hear.

At my place of work near Metrotown, there are quite a lot of nice places where I could go for lunch. And they are inexpensive and good too. Often when I go out for lunch, I don’t really have to decide what I want to eat. I’ll just take a mid-day walk and stop by a restaurant I fancy.

But there is one place I never stop at until recently. I did not even realize that it’s restaurant at all until I take a second look. And I had been working in this area some years now and I walk past this place three or four times a week too.

Nestled between a payday loan store and a sex shop (what a name, Male and Female Harmony Store) is a small lot. It is oddly smaller than the rest in the row of shops. That small lot has the words “Music School” in the weather-worn awning. Obviously this is not a music school but it wasn’t obvious too that this is a restaurant.

I would have never paid much attention to this place. Not many people would. Even the cracks on the windows were just crudely taped up. There were metal bars on the windows and the doors.

Not many people would have paid much attention to this place. Not when there are a lot of other restaurants around too.

So much for the cover. 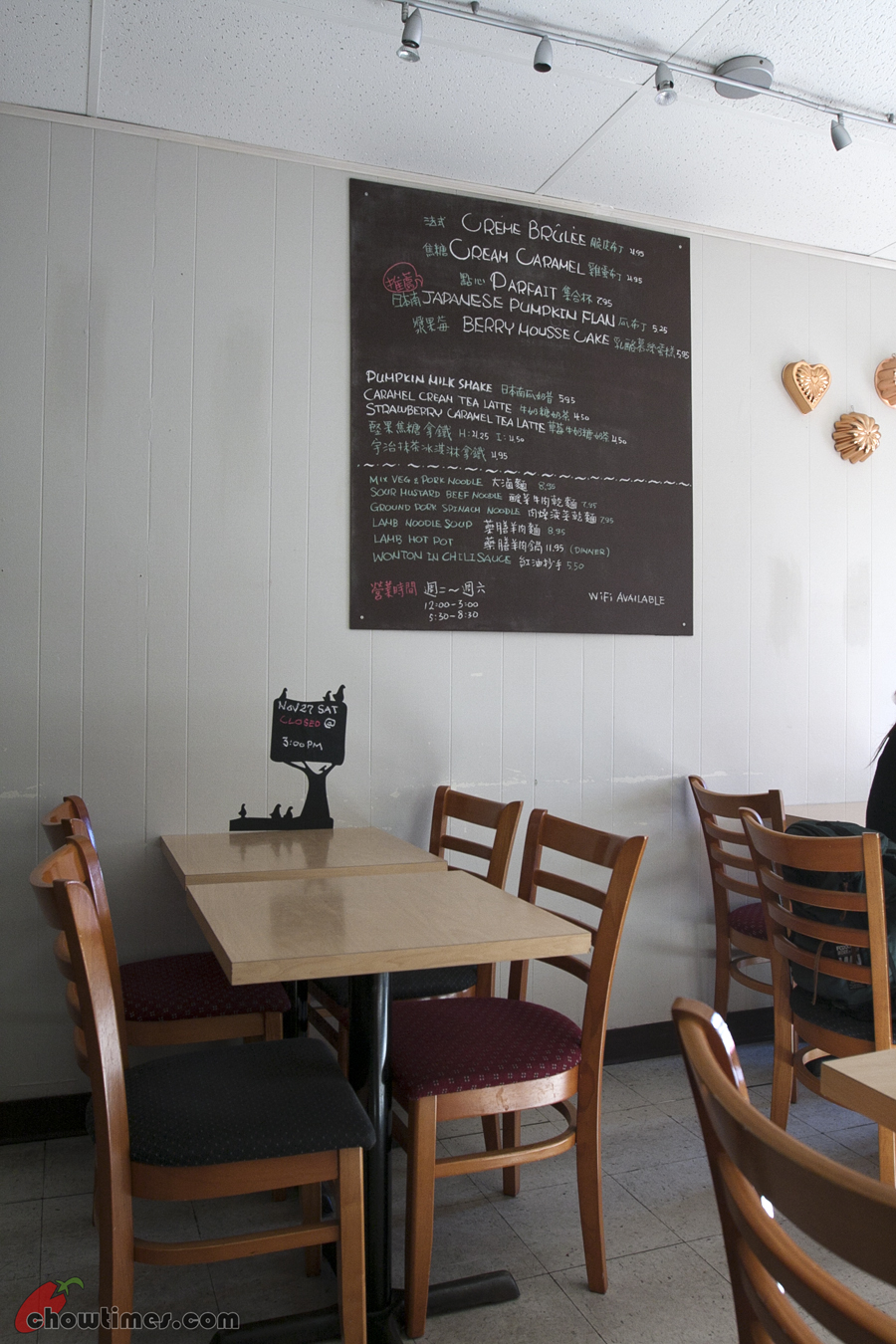 A few weeks ago, I peeked in through the curtains and I thought it was sort of neat. I decided to chance it and have lunch here. Pushing open the door, I had a very pleasant surprise. Very very much unlike the outside, the inside was much better. It was very homey.

It was very clean, very tidy. It is also very small. They only have seats for 20 people max. They played soft classical music which I enjoyed a lot. Lunch time is not just a sustenance time for me. It is often a decompression time too. It is a time where I get myself cocooned in my little world with something to read in my hands and just enjoy the food. I like times like that and this was just what I like.

The other popular restaurants around this area was just too busy and too bustling. Some of you will know what I am talking about … Sushi Garden, Green Basil, Lao Shan Dong, S&W Pepper House and the Crystal Mall Food Court … some of my usual lunch places. 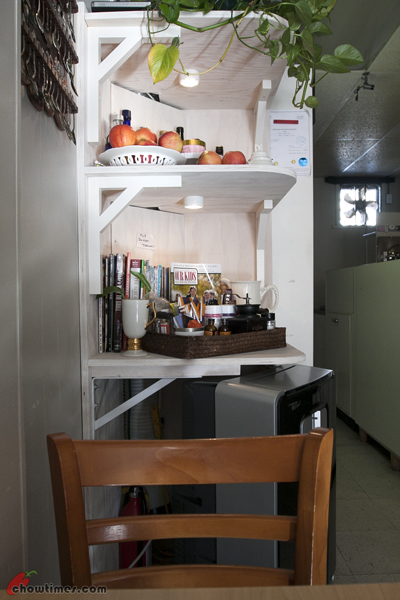 This nameless restaurant is apparently called the Accord Food House. I only got to know the name after I saw it on the receipt.

While this place is small it is homey but also basic. They make it as homey as possible and takes the effort to make it like you are dining in their home.

I asked for permission to take pictures of the restaurant. They said OK but asked that I don’t take the picture of their kitchen. It is an open kitchen and I am very impressed with the setup. One just don’t see a lot of that in a Chinese restaurant where everything is so neat with a place for everything. The ingredient containers were very clean and arranged very nicely. Everything is in its place and there is a place for everything. You just gotta see it to know what I mean. The best “viewing point” is the two counter seats. Go for that seat and observe them work.

Service was very good. They are nice humble people who seems contended with what they are doing. From what I see, it is suggested to me that they care a lot of doing things right than doing it big. 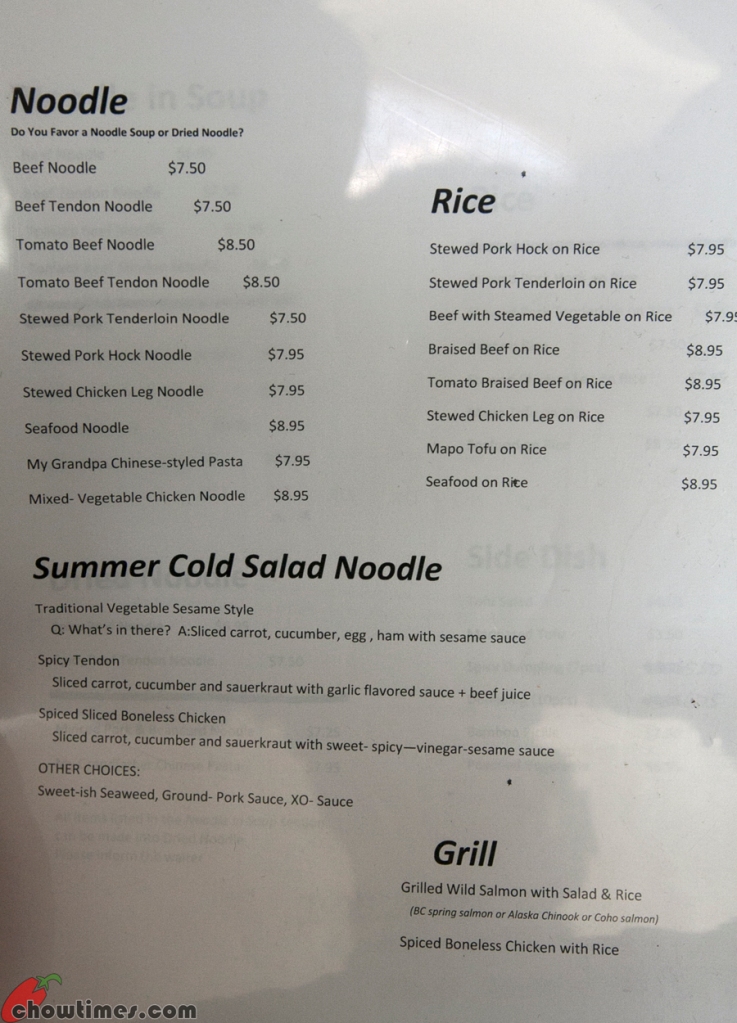 You may click on the menu above to enlarge it.

It is a very simple 1-pager menu. When I asked them if I could take pictures of it, they were quite hesitant because they said it is so simple. They also added that they had some special dishes that they introduce once in a while and it is all written on the board in the dining area (see the third picture from the top).

One-pager menus is not a problem with me. I had eaten here several times already before I took my camera along last week. Their food is good and that is what matters. So far I had tried two dishes and both of them were excellent.

On the menu, they listed “Beef Noodle $7.50” and “Beef Tendon Noodle $7.50”. No mention of beef flank. All TBN has a beef flank option. They told me they have been flank too, just that the “Beef Noodle” is meant to refer to both flanks and tendon.

But you know what? What scores for me is their … tendon.

The beef noodle is served in a medium size bowl, not like Lao Shan Dong’s gigantic portion.

Just look at the tendon. It is soft and the marinades permeates into the tendon. Very flavorful and I enjoyed this a lot. They sliced it into chunks instead of a long big piece. Their tendon has got to rank as one of the better ones I had tasted.

The brisket on the other hand was OK but tendon is good. 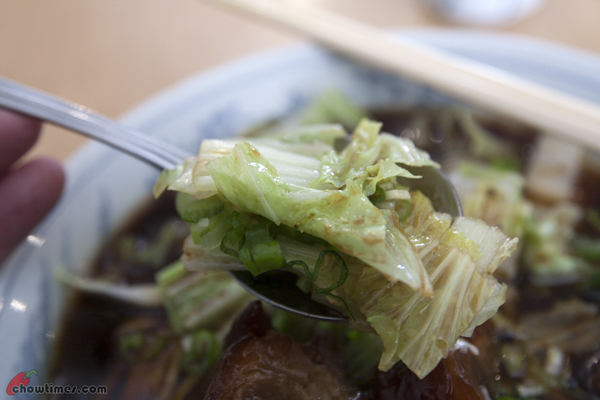 They serve this with soft shredded cabbage. No sour mustard here.

The long slippery noodles were well made and holds the soup very well. I always get stains on my short eating Taiwanese Beef Noodles.

And their soup is “clear”, not “busy” if you know what I mean.

I categorize Lao Shan Dong’s and No 1 Beef Noodle soup as “busy”. They had lots of bits and pieces floating in the soup. The soup is also thicker and stickier.

On the other hand, the TBN soup in places like Chef Hung’s and Taiwan Beef Noodle King on Oak are “clear” soup.

Both are nice in their own way. I have a personal preference for “clear” soup. So, yeah … I lap the whole bowl clean.

I had also tried another dish of their called “My Grandpa Chinese-Style Pasta”. It is pretty good and it’s worth a try and I think you will like it too. I was curious about this dish because I had never heard of such dish in a Taiwanese place before. The owner told me that it is actually his own grandpa’s pasta! He said when he was a little boy his grandfather often makes this homestyle dish that he loves so much that he decided to put this into the menu. Since there is no better name for this dish, he just called it “My Granpa Chinese-Style Pasta”. 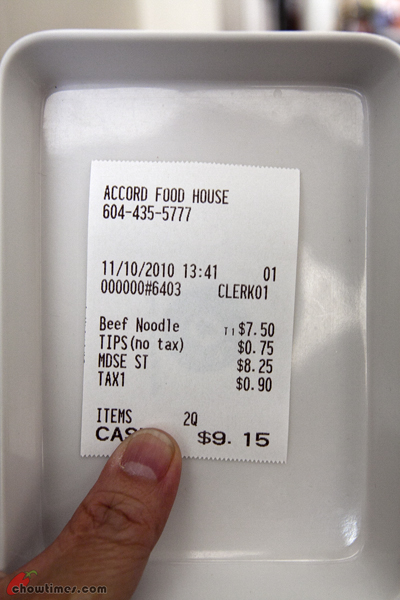 One thing I did not quite like about this place is that it place a tip of 10% automatically on the receipt. It wasn’t the amount that I am concerned about because I do tip more than 10%. it is that people (mostly men!) don’t read receipt and might pay tips on the total amount.

To their credit they did call this out to me as they gave me the receipt. It is just that it is not common practice.

I like this restaurant and had been going back several times already. They seems happy doing what they do. I am curious because I felt they have potential to expand. The owner laughed and just say it takes money. It seems to me they are contended as they way it is.

They have short hours unlike other restaurants around. They open only at noon and then serve only tea from 2:30PM before starting dinner hours from 6PM. See their hours below which they told me they follow quite strictly:

If you are in the area, check them out. Ignore what is on the outside and go in and see for yourself. You might just go away feeling impressed as I did. I had been going back to this place several times already.