Well, this was the last evening in Spain.

We got back from Toledo and had a short nap in the hotel to recharge ourselves. We then went out to explore Madrid but largely we were in the vicinity of the hotel on Gran Via and Plaza Mayor.

We spent sometime just sitting in Plaza Mayor to watch the world goes by. We thought we understand the Spanish people much better in this trip and frankly, we had gained respect for them as a people. Spain would have been a much greater nation than they are today if not for some unfortunate turn of events centuries ago. 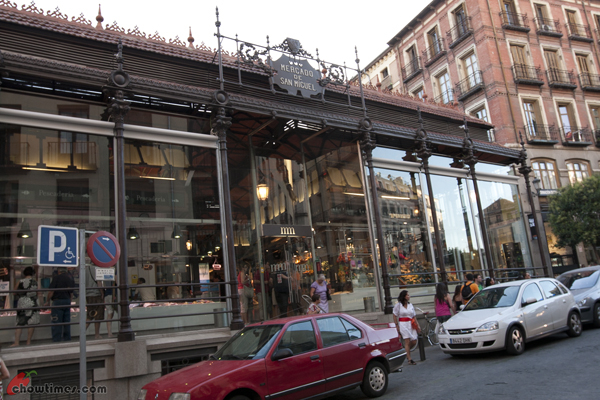 We had passed by the Mercado de San Miguel twice before. This time we went in.

It is a nice and modern place that is … a combination of old and new. The structure of the building is made of iron but they had spruced this up to be an upscale market place. It’s hard to believe that this building is 100 years old.

The people here dress up like they are meeting up for an after work party or something. We were in our T-shirts and Jeans and did feel out of place. Because of the locale, we thought this would be more touristy. However, it seems like there are more locals here than tourists. 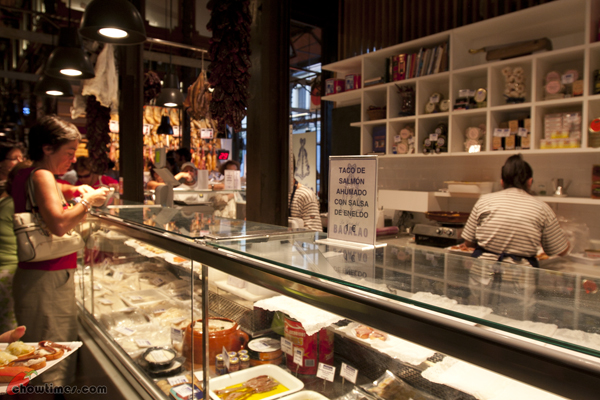 There was a popular stall that people were lining up for. I guess it must be good and so I joined the line. It seems like this is about the cheapest thing available here.

Most of the other stalls were specializing on gourmet food like oysters, seafood, cheese, bread, wine, pastries, candies, chocolates and of course, jamon. 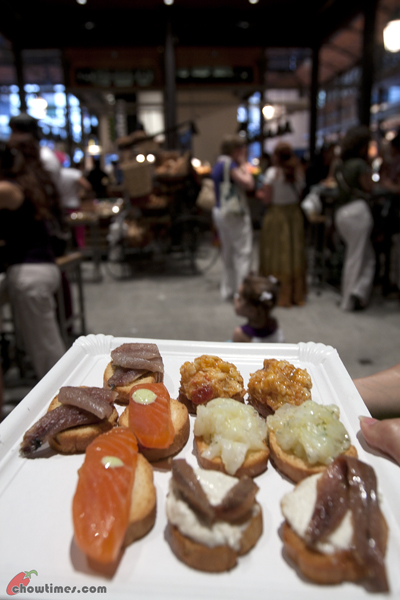 Everyone was eating standing up. There are a few standing tables but they were all taken. So we ended up standing all the time.

This was one euro each with nice seafood (mostly smoked) served on bread. We did not hang around for long as there were no seats.

We went to a restaurant nearby and got some drinks. Suanne got the tropical smoothies (5 euros).

For me, I had the horchata. It was sweet and tasted a little powdery. It tasted like jicama. But anyway, I love this refreshing drink.

So, that was it … just a quiet night. Know what we talked about that night? We were wondering how the boys were doing back in Canada. They had been attending a three week summer camp while Suanne and I scoot off to Spain for our vacation.

It was time to go home. We were getting homesick …