My jaw dropped the moment as I was ushered into the private dining room.

I knew this is no simple dinner but never in my wildest imagination that the table will be spread out this lavishly.

… when I got home, I was totally shocked with the red cast on the pictures. I had never seen pictures this red before. He he he … the red cast did make it look somewhat porn’ish.

You see, the private dining room was dim and it was lighted with red lights. I really thought it would not be a problem. I could always go home and fix the white balance. 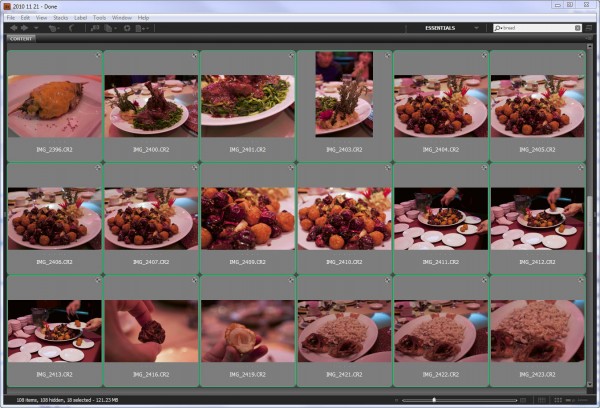 As much as I try to fix the white balance the usual way, it still turned out very pinkish. So I tried to salvage them with extra processing steps and the pictures in this post is the best I could come up with.

The man behind this banquet is Chef Robert Wong who was the (a?) chef at Chili Fagara in Hong Kong.

I couldn’t believe my eyes. The table setting was gorgeous and elegant. In the middle of the lazy susan was a centerpiece of three tall candle stands which lend an atmosphere of elegance and exuberance.

What I was more fixated at was the appetizers already spread out.

All EIGHTEEN of them!

I was standing there and thinking if this is just the appetizers, what is in store for the rest of the night? It was exciting just seeing all these appetizers here. This collection of appetizers is known as “The Little Buddha” appetizers. It is mostly vegetarian and healthy selection.

We were served by two servers. They even took the trouble to explain and describe each and every of the appetizers. They lost me after the fourth one. Luckily Suanne was diligent in taking notes of them.  Here it is … you can click on the pictures below to show it in its glorious greenish tint if you want. 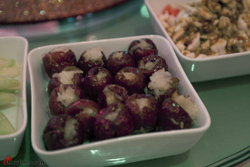 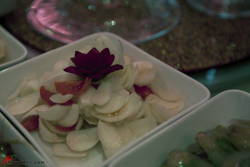 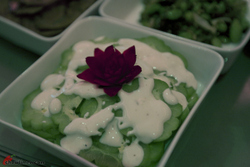 What do you think? LOL! Yeah, everyone was excited over this. I *think* I tried everything.

Never in my life had I encountered 18 appetizers, not even 18 banchans in a Korean meal. 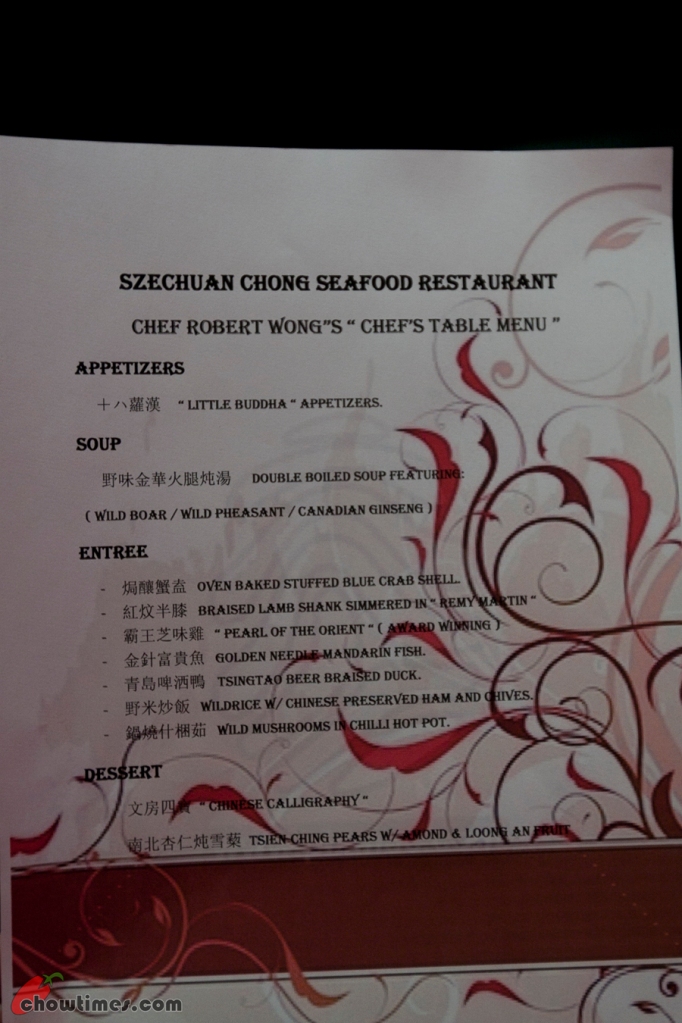 This is the menu of the “Chef’s Table” … specially put together for this group by Chef Robert Wong. You can click on the picture above to show it larger.

All this is not possible if not for fmed who pulled everything together. 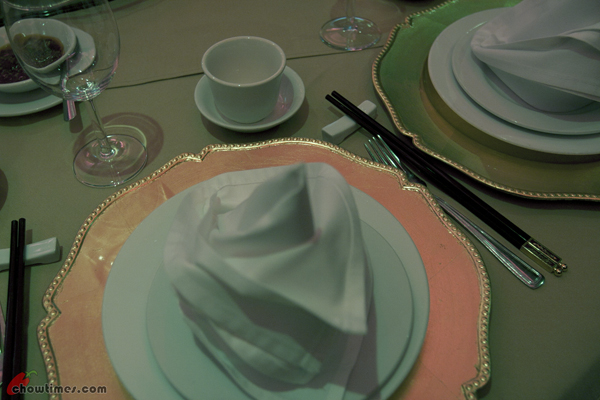 This “Chef’s Table” banquet was attended by 15 people. It is $50 per person and I know that the value of this dinner is definitely more than $50 considering the preparations involved.

After the appys, we had the soup. There was a last minute switch because the wild boar for this soup did not arrive in the kitchen in time. So Chef Robert were forced to substitute the wild boar with wild pheasant (silkie chicken).

This Double Boiled soup is steamed for 5 to 6 hours with Shiao Xing wine and Canadian ginseng and has Shanghainese ham. 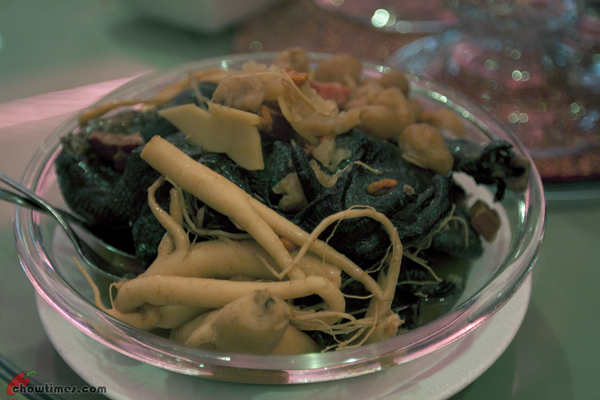 The silkie chicken and especially the ginseng are not meant to be enjoyed. All the flavours of the ingredients are already in the soup. While the meat is edible, I always find them tough and flavorless. I wonder why restaurants always present the ingredients on a plate when in fact not many people will touch it. Maybe it’s to show the diners the ingredients used, you reckon?

Someone took a bite of the ginseng out of curiosity and declared that it is bitter.

After all the trouble of double boiling the soup, it is this small bowl of clear soup that is prized. This is a deep flavour soup with light ginseng taste.

By the way, I assume everyone knows what double boiling is, don’t you? If not, here is a good explanation. 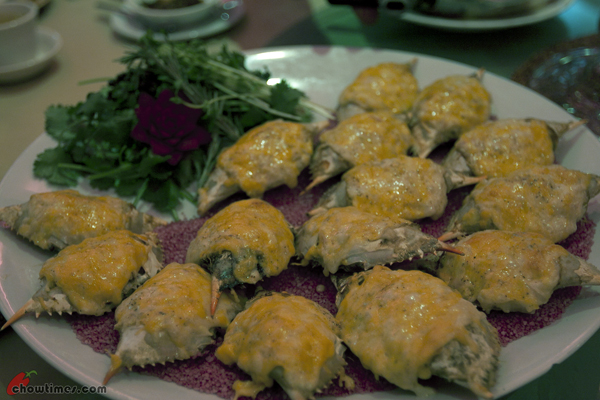 Next came the Oven Baked Stuffed Blue Crab Shell. It is topped with melted cheese.

Everyone got just ONE. I need more! The filings has onion and sweet potatoes.

What I love especially is that it is garnished with pinkish salt which I think is Himalayan salt. The salt adds crunch and saltiness.

The Braised Lamb Shank simmered in Remy Martin and Shiao Xing wine was a sight to behold — very beautiful presentation.

The lamb shank is served on a bed of pea shoots and has some mashed sweet potatoes on the side. While it was beautiful to look at, this does not wow taste-wise. It was not that it is not good. It is just that I hold this dinner at a higher standard. 🙂

A lot of people love the “Pearl of the Orient”. We were told that this is an award winning dish but am not sure what award though. There are two “pearls” … 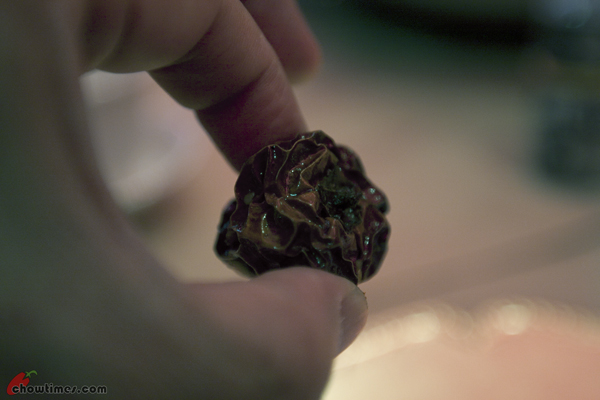 The first “pearl” is the “Facing Heaven” chili pepper. I did not see anyone else eat this but I did — just one. It was spicy and crunchy.

Hey someone told me that if I eat chili peppers like this with the seeds in it, the seeds will cause cancer. Is that right?

The other “pearl” is unique. It is a lychee wrapped with chicken meat … or perhaps I should say it is a chicken meat ball with a lychee in it.

Whatever it is, this is the favourite of most diners because of its uniqueness. 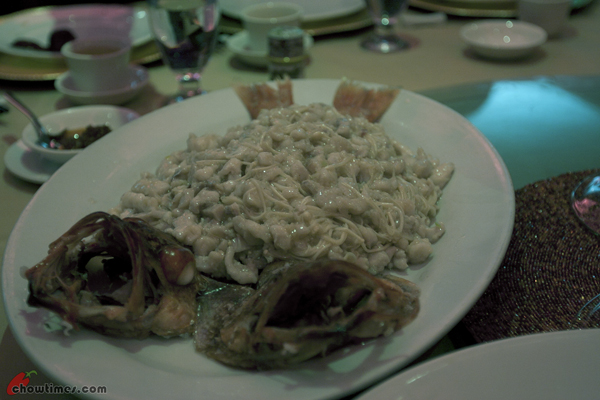 I like the Golden Needle Mandarin Fish or in Cantonese, it is Gum Jum Fu Kwei Yu.

Chef Wong used Rock Cod (Sek Bun). It is topped with enoki mushrooms and water chestnut. It has a smooth texture with a crunch from the water chestnut.

You know what … I felt it was not warm enough when served, otherwise it would have been perfect-er.

There was two heads and someone did finish it off. Hand up now … who ate this? Did you eat BOTH heads?

Next came the Tsing Tao Beer Braised Duck. OK, this one I did not care too much about. It was too … errr … complex. It had too much ingredients in it.

I had tried so many beer ducks before and I had never quite enjoyed any one in particular. I mean, the name beer duck sounds so good but I have still not encountered one I can say I enjoyed. 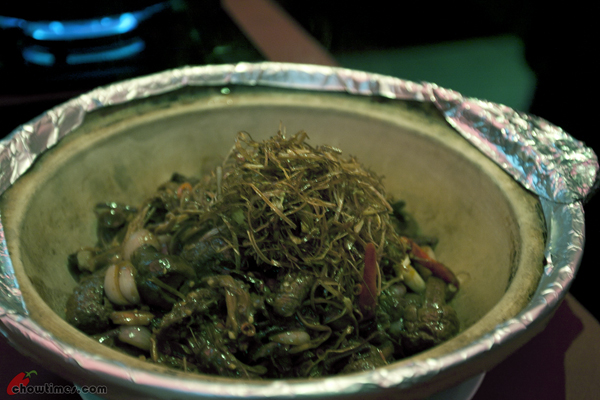 The Wild Mushrooms in Chili Hot Pot was woody and crunchy. It tasted very gingery and this was another dish I did not get. It was not my favourite. Maybe it is because I could not clearly see what it was I was suppose to taste for.

But surprisingly, this pile of stuff I enjoyed tremendously. This is Wild Rice with Chinese Preserved Ham and Chives.

People was starting to feel full already and Suanne certainly was. She couldn’t barely finish hers and I gladly took hers. 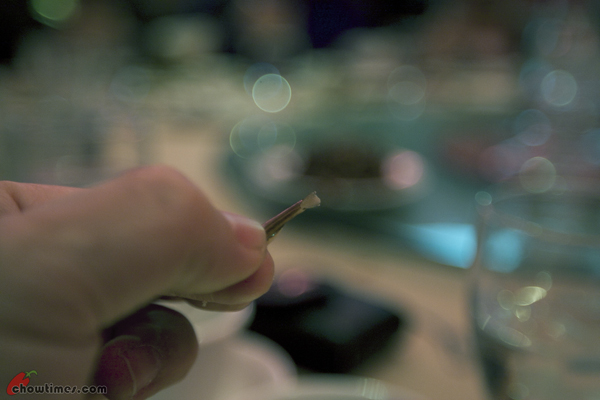 I was wondering if this is widely available in restaurants. If it is I would certainly want to order this next time. I love this. 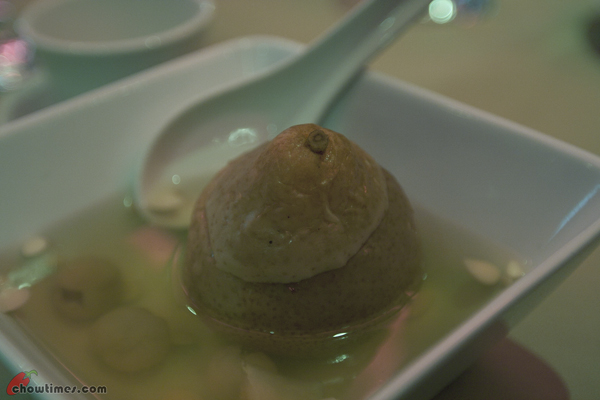 The Tsien Ching Pears with Almond and Loong Ngan Fruit was the dessert.

It has an orange peel flavour. I thought that was that but no … there was one more surprise to come! 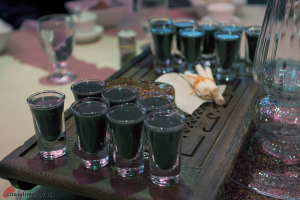 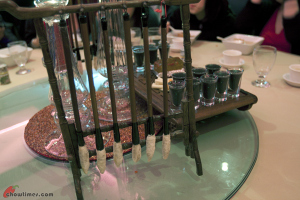 This final dessert is eloquently presented as a Chinese Calligraphy set. Very interesting. Frankly it is more form and function but I give Chef Robert credit for creativity.

In Cantonese this is called Mun Fong Sei Bo. My translation of that is Four Treasures of the Study Chamber.

The four treasures refers to: 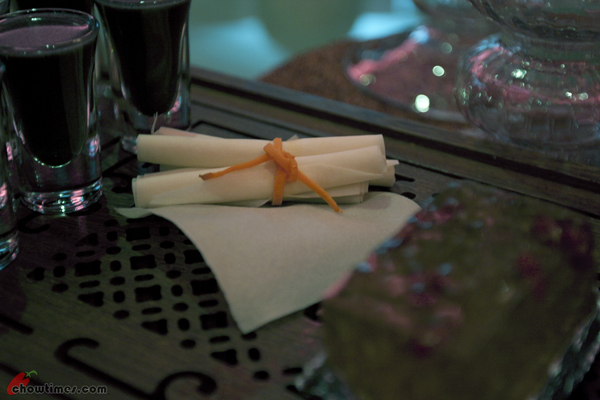 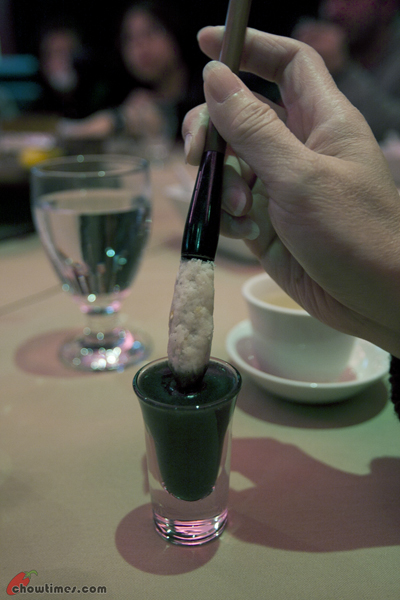 The calligraphy brush and ink is pretty clever.

Under the brush holder is a peanut filled pastry. It must have been laborious and difficult to fit the brittle pastry into the pen holder.

No, it is not meant to dip the pastry into the “ink well” like you see above. The above is just strictly for illustration. 🙂

The ink stone was represented by the usual osmanthus jello with wolfberry like those you see in dim sum meals.

I thought that the ink stone would be more appropriately represented by something black. Turtle jelly (guilinggo) or grass jelly (leung fun) would have been better since it is black don’t you think? 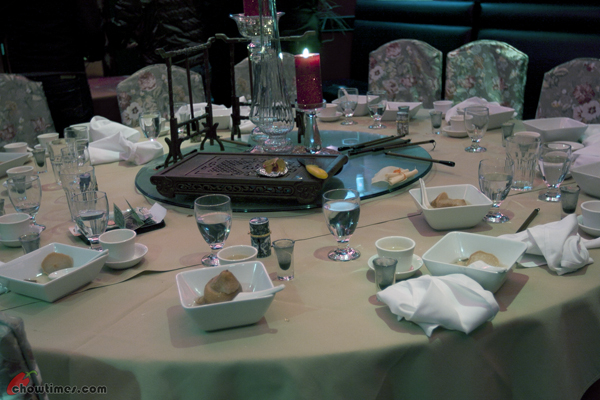 Fantastic meal. We were all very impressed. It is rare that we get to eat like this. Chef Wong came out at the end of the meal and spoke to us. He mentioned that he plans to open a new restaurant soon and I have a feeling that it will be based on this concept. If it is, I would be extremely excited because I am sure there is a demand for this sort of dining in Metro Vancouver.

New Mitzie’s Restaurant in Chinatown: In Search For National Dishes