The coldest day of the past week or two was that day when the thermometer dropped to minus 10C. It is darn cold but after it dropped below freezing, minus 10 or minus 5, it all feels the same.

So it was time for a hot pot right in the middle of the day. Many hot pot restaurants are opened only for dinner but this is one of those which is open at day time. I think this is because hot pot meals are time consuming and so not suited for lunch for many people who does not have the time for it. 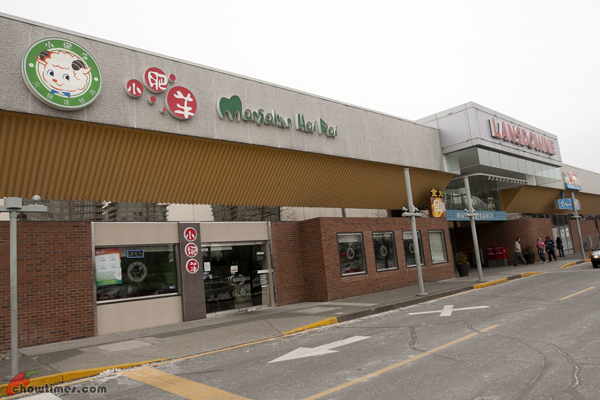 The Mongolian Hot Pot is located in the Lansdowne Mall. It is at the eastern side of this massive mall in Richmond. So you want to make sure you park at the correct side of the mall or else it is a long walk through the mall. 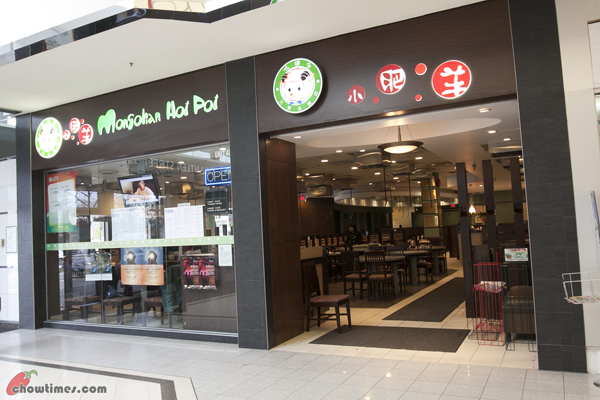 This restaurant is called the Mongolian Hot Pot in English. However in Chinese, the name is translated to “Little Sheep”.

According to their website, it seems like they are one of the largest hot pot restaurant chain with over 350 outlets, mostly in Asia. The amazing thing is that their first restaurant is established in Canada, specifically Ontario, not in Asia.

What I can’t understand is why is this restaurant in Richmond called Mongolian Hot Pot when the “Little Sheep” name is much more well known to the Chinese community. 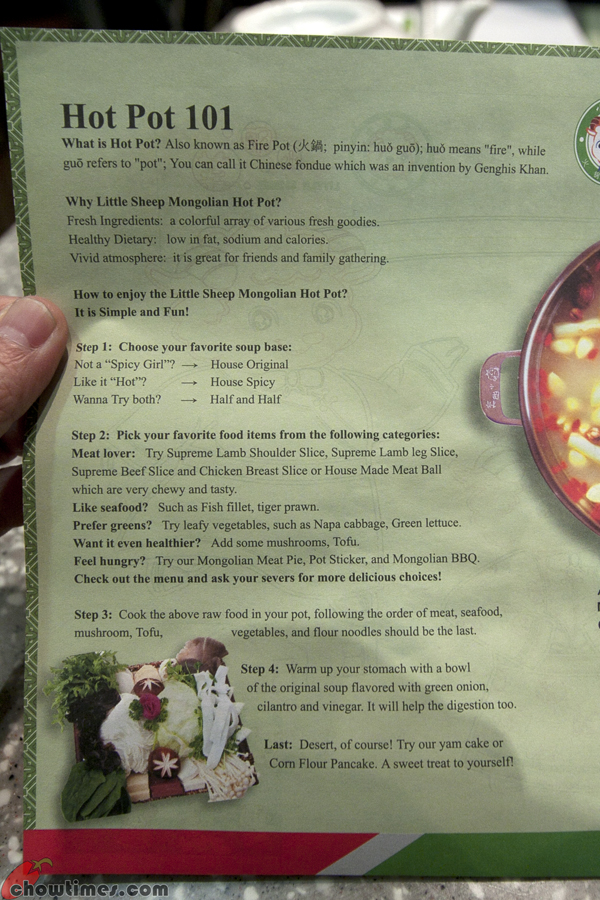 The irony is that that they claim that  Hot Pot is the invention of Genghiz Khan. As far as I know hot pot had never been part of the Mongolian cuisine, let alone having invented it. There were stories that the Mongolians started having hot pots in the cold Mongolian steppes by boiling their food with their helmets.

Go ahead and click on the picture above. It is on the paper table mat they have on the table. It has a Hot Pot 101 section for people who are unfamiliar with hot pot. 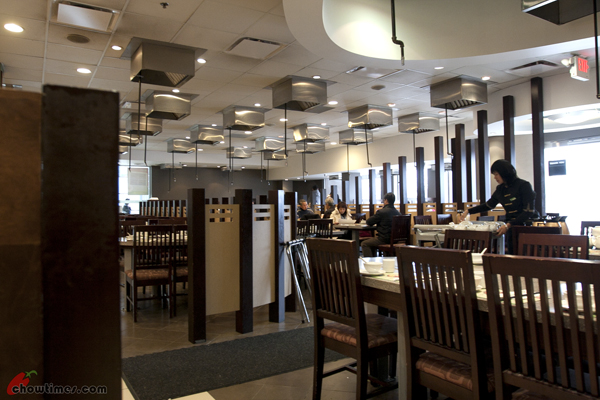 The Mongolian Hot Pot Restaurant is huge. I think they have the biggest hot pot place compared to any others in Metro Vancouver. I think even the Landmark Hot pot House is smaller than them.

This restaurant has a reputation for extremely bad service. We went in with an open mind and you know what? Most of the service staff do walk around with grumpy faces. Yeah, that external attitude did hit me the moment I walk in and then when I tried to engage them with the menu. It is like they have no time to talk.

I can understand now why there are so many complains about the service here. Something is very wrong and they need to fix it. 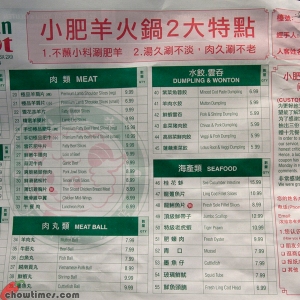 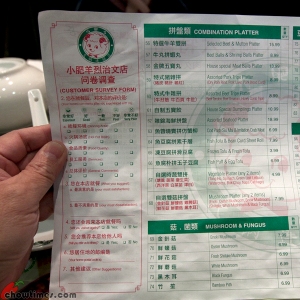 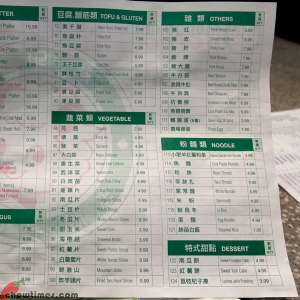 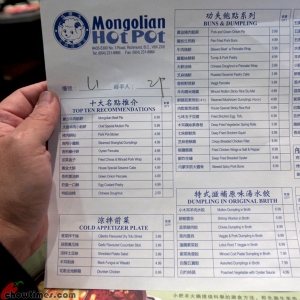 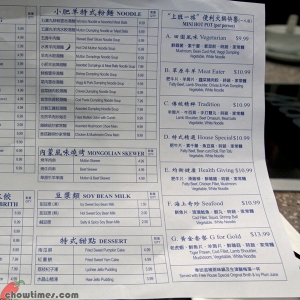 You see, the moment we got seated, the waitress just dropped two sheets of order form on our table. It was wrinkled like they had wet it and just dried it up. Fine, it’s not really an issue.

The waitress did not look at us and did not say a word as she dropped that on the table. In my usual cheerful self, I asked her “oh … what is the difference between these two menus”. She just glanced at me, turn around and mumbled that its an order form. I hate people talking to me while turning away. I think it is extremely rude. And I KNOW that it’s an order form. That was not my question.

If the manager had not come to us right after, frankly we would have left.

This is NOT a all-you-can-eat (AYCE) hot pot restaurant. You order the ingredients you want and they are not cheap. So you gotta be careful about what you order because the cost could pile up. They also have “combos” that they have assembled a few ingredients together. Because of the wide range and rather confusing manner that this is laid out, there are a lot of overlap. They should take a complete relook at these two forms and simplify them for the customer. 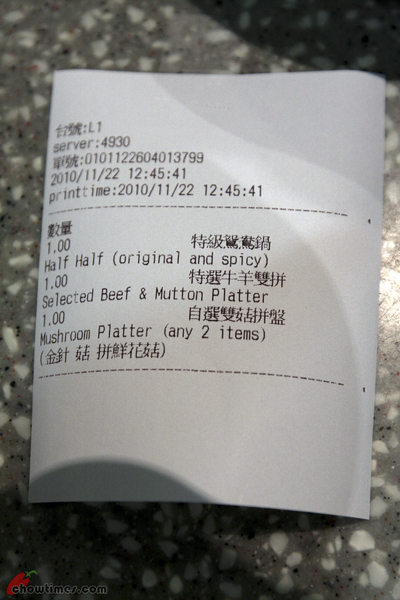 We left it to the manager to help us pick. We said we want beef because we like beef a lot. We also said we wanted mutton because it is their specialty.

He suggested that we have some vegetables and we decided to get the mushroom platter. Sounds like so little right? Especially when compared with having AYCE Hot Pot. 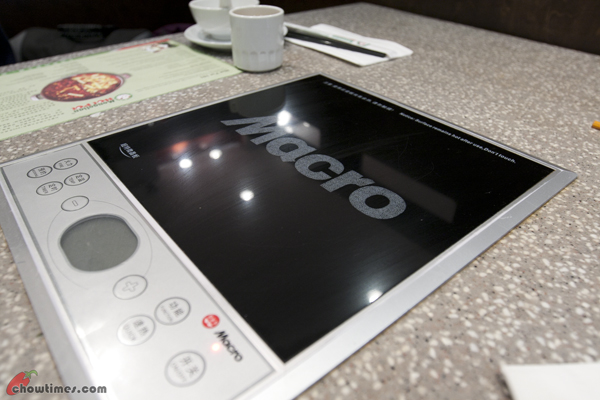 No flames here. They have electronic built in heating element on the table. It was very effective. You can make the soup boil in seconds by just raising it to the highest setting. 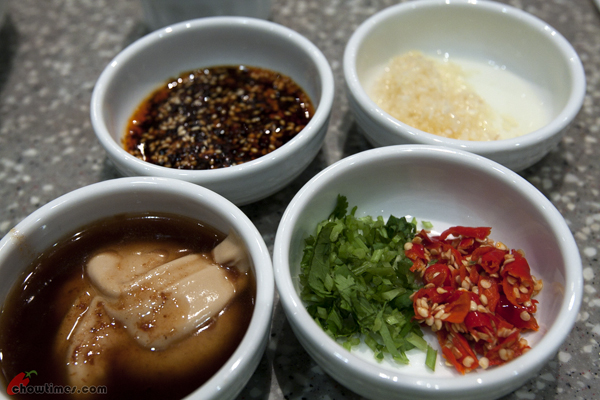 What I like best about this restaurant is that all sauces and condiments are free. You can get as much as you want from the condiment station on your own and they have a great selection too.

But this restaurant is famous for their broth. They are so proud of their broth that they claim that they do not need to rely on many types of sauces to complement the taste. 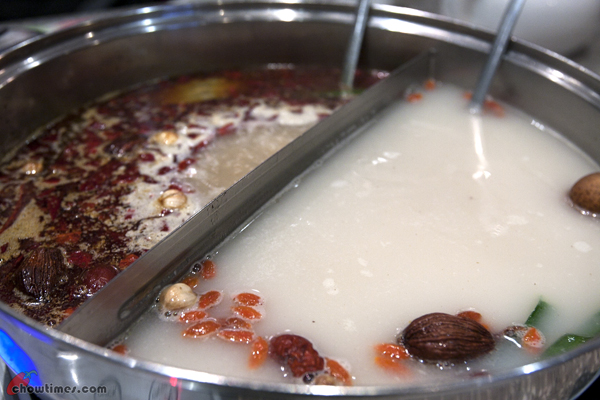 And I totally agree.

Their broth is second to none. It is indeed full of flavour. We took a sip of the broth as soon as the pot landed on our table. It was really really good.

We got the Half-and-Half Broth which is $10. The non-spicy broth is very milky. It has a lot of ingredients including wolfberry and other herbs in it. This is really good enough that we did not need to eat with dipping sauce. That’s right. 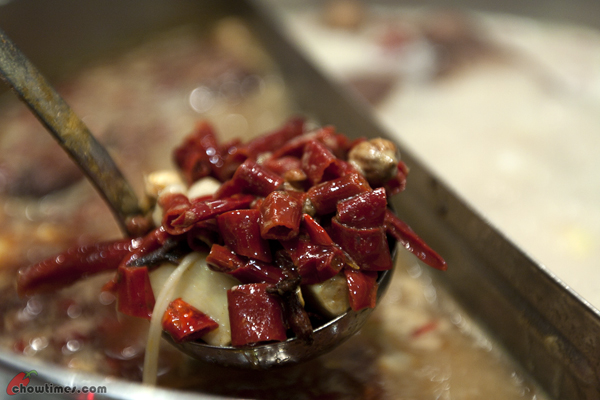 The spicy side of the broth is also very tasty. It is also not very spicy. I can’t see any peppercorn in here but I thought I detected a taste of it in the broth.

Actually, they have a great balance of spiciness that I like a lot. 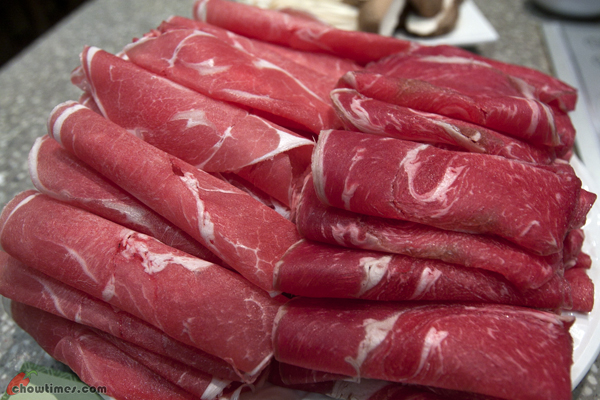 The Beef and Mutton platter is $16. It is a lot of meat in this platter. We earlier thought that this is “mm dai” (not worth the money) because most places charges all you can eat for the same money but really, how much can one eat. This platter had enough meat to satisfy us.

And it is good and nice meat too. 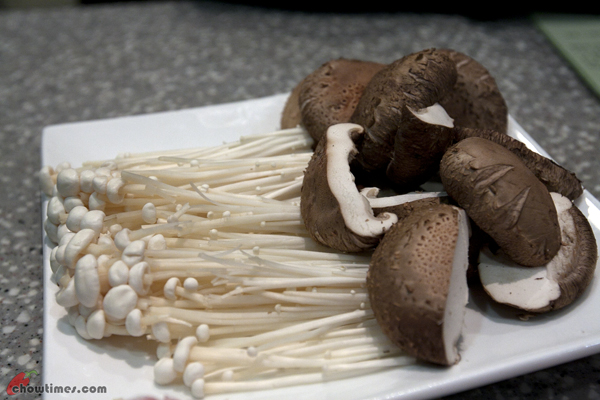 The Mushroom Platter is $8. It came with a pitifully small plate of Inoki and Shiitake mushrooms. 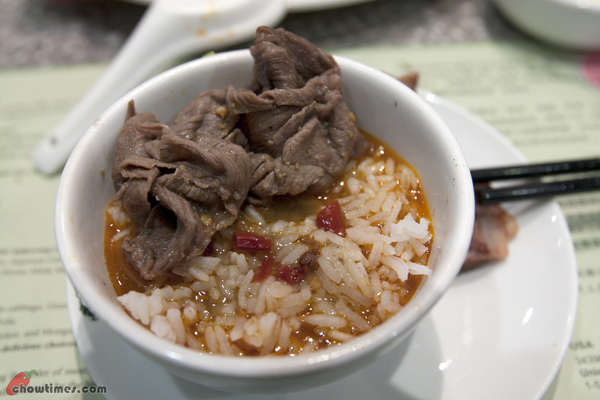 With just meat, broth and mushrooms I needed more and asked for steamed rice. Yeah, I just like soup in rice. So this is wonderful for me. I actually enjoyed this every much. 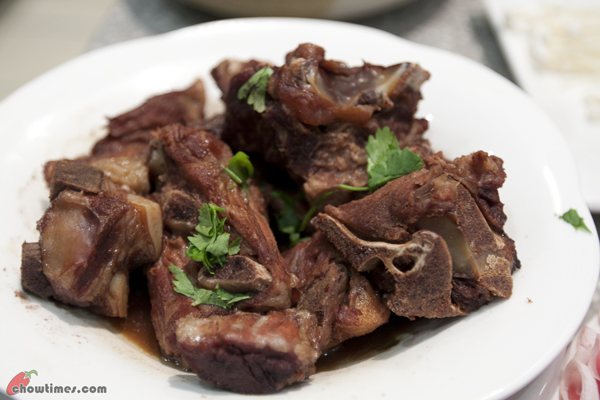 Still not satisfied, we ordered something with an interesting name. It is called the Mongolian Spicy Bone ($6).

It is cheap and does look good … but … 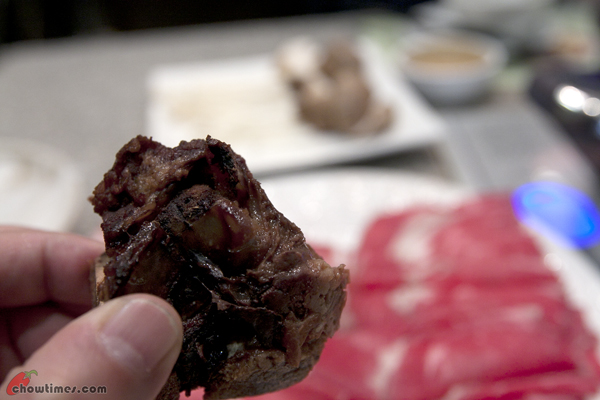 This is basically parts from the pork neck bone. There are more bones than meat and the meat was rather tough. We only ate half of this.

Not nice. Don’t order this. 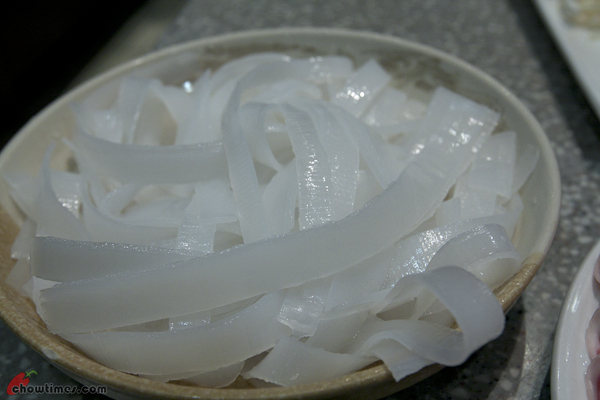 And then we ordered another item. We still have lots of soup and the nice soup is not to be wasted. So we ordered one more dish. 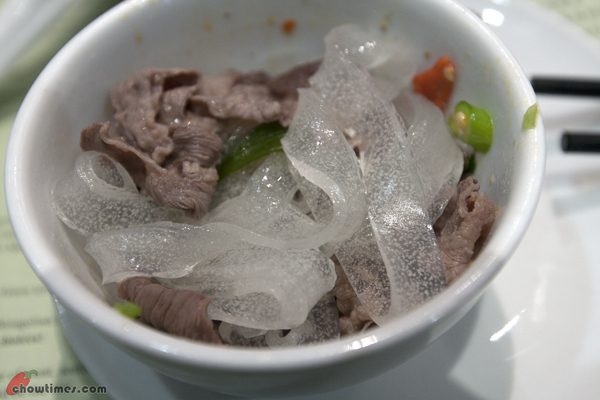 This noodle is very interesting. It is brittle when uncooked but when it is cooked it looked nice with transparent texture and sort of like air bubbles in it.

The Yam Noodle was chewy and firm. 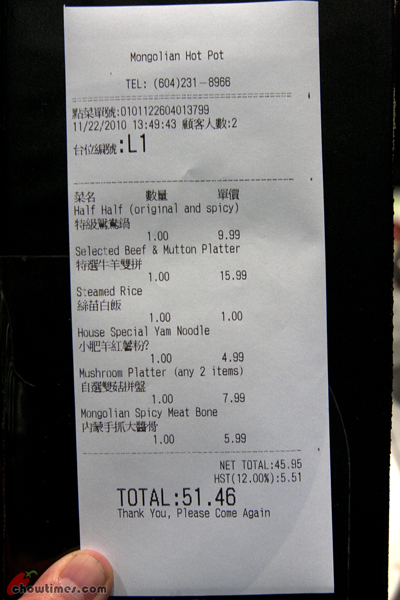 What I like about this place is the broth. That one thing scores for us. The free condiments is what we like too because we get to choose how much we want without having to pay for it.

The service sucks. Big time. They really need to fix it. It is not hard unless they don’t care.

Overall it is not too expensive. You probably pay the same in AYCE with everything included. OK maybe this is a little bit more expensive and that in AYCE you get a heck lot more variety.