We had been having a lot of hot pots these days. Too many. I am saying that because every time we had hot pots, we ended up regretting it because most hot pots we go to are All-You-Can-Eat (AYCE) restaurants.

There seems to be a lot of new hot pot places opening these days. I wonder if there is a reason to it. I do wonder if it is because it is simple to operate and at the same time they bring in more sales per customer compared to other Chinese restaurants. Each hot pot AYCE meal will easily cost $25-$30 per person after you factor in everything as opposed to $10-$15 elsewhere.

We forgot about this place after until Buddha Girl pointed out to us that this hot pot place has a THREE soup hot pot.

Yup, the only motivation for us to come to New Concept Hot Pot was only because they have THREE soup hot pot. We are not aware of any hot pot restaurants in Vancouver that has three soup pots.

The New Concept Hot Pot is located on New Westminster Highway in Richmond. They are in the small strip mall with a double story building just east of No 3 Road. It is just next door to Alleluia Cafe.

Talking about Alleluia Cafe. We had once blogged about it before (here) but it was long time ago. Five years ago as a matter of fact! We wanted to come back because it is certainly one of the better HK Style Cafes. What I wanted to come back for is their bottomless milk tea! I heard they refill milk tea. I need to prepare myself before I go because I know what bottomless milk tea does to my sleep rhythm. 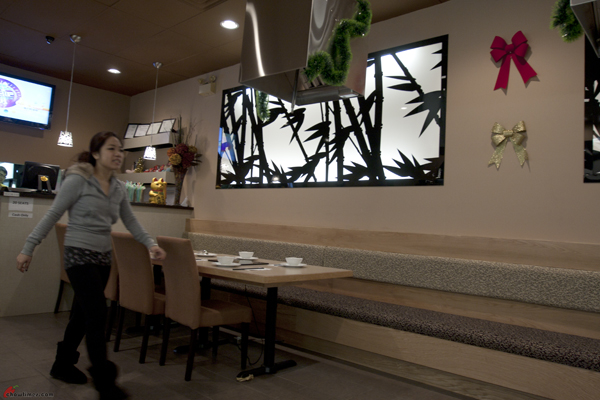 For a hot pot restaurant, New Concept is small. They only seat 20 people at one time.

We went early at about 6:00 PM. No reservation is required at that time but it is chancy. By 7:00 PM, there was already a wait of 20 minutes for a table and we saw that they were turning people away shortly after. So to be on the safe side, it is best to make a reservation before hand.

Most of their customers speak Mandarin. Maybe it is just me. Do you find that even within the Chinese community, the Mandarin speaking and Cantonese speaking customers do generally congregate to certain restaurant? I know this is a confusing question. LOL! For instance, I go to the Golden Szechuan Restaurant and I see mostly Mainland China customer (from the tone of Mandarin). In Corner 23, it is mostly Taiwanese. In HK Style Cafe, it is mostly Cantonese speakers. Oh … don’t bother to answer me … ignore it, I just asked that question because I can sense some flames coming my way. 🙂

First time I saw restaurants serving sunflower seeds as a (free) snack. Do you like this? Admittedly I like it … but I will not be caught seen in public eating this. It is too feminine. Guys eat this only at home watching TV. For girls, it is cute seen eating this.

[ Please don’t flame me. I am just trying to provoke a reaction from you. 🙂 ]

Their AYCE is $18 per person. This is excluding:

Every hot pot places will advertise the AYCE price but if you add up everything, it will come up to at least $25 and close to $30. So if you don’t have a healthy money tree at your backyard, it is good to do your homework or you will feel the pinch when it comes to pay.

The above is their order form. It is not big. We had seen much bigger ones. It seems like they are still expanding the menu because they hand write the new choices on it. We don’t know what these new ones are as it is all in Chinese only.

We paid attention to the “Our Specials” section at the bottom left (click on image above if you want to enlarge it). There are four items on it and naturally we ticked all four. 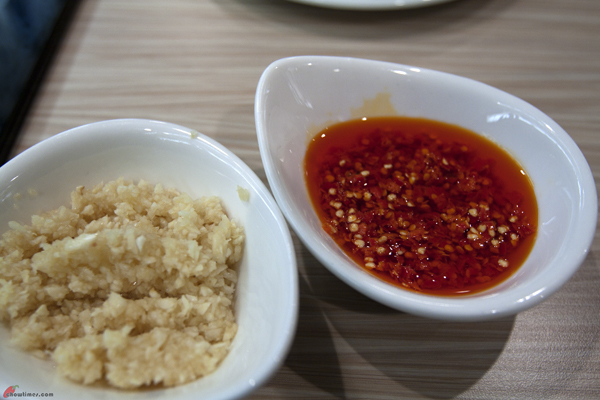 The condiments are $1 each. It’s quite OK at that price. I would be happy if it is 50 cents only. I can’t remember where now, but a recent hot pot place I went to was only 50 cents.

Oh wait … it is FREE in the Mongolian Hot Pot.

I just like brand new tableware. Hey question … where do you go to buy these types of tableware? They are thicker, whiter and better quality than the ones we see in Asian grocery stores. We had been using the same Corning Ware ones for umpteen years already. I think it’s time to get new ones.

Here we go … to get myself physically prepared, I loosened my belt by one notch.

This one costs … $10 and you get to choose from four types available on the menu. Our choice was:

We thought that the “Pepper” hot pot was the type of white pepper you used to make pork stomach soup. But no. Instead “pepper” meant Sichuan Peppercorn. So it was somewhat like the Spicy one. If we knew we would have gotten the other one instead.

Yeah, I got the message. Swallowing my pride, I said “OK, medium spicy”. 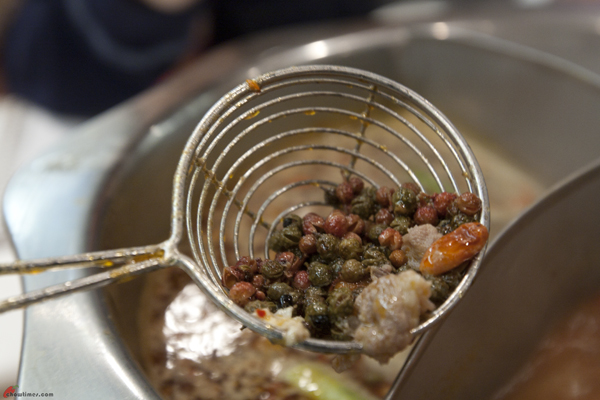 OMG … the medium spicy burns at the first sip. Suanne laughed at me and said “don’t be a hero next time”. Strange thing is the spiciness dissipated very quickly and after a short while it was not as spicy.

What we like most was the edible fungi which has button mushroom and another kind of woody mushroom. It also had goji berries and green onions. 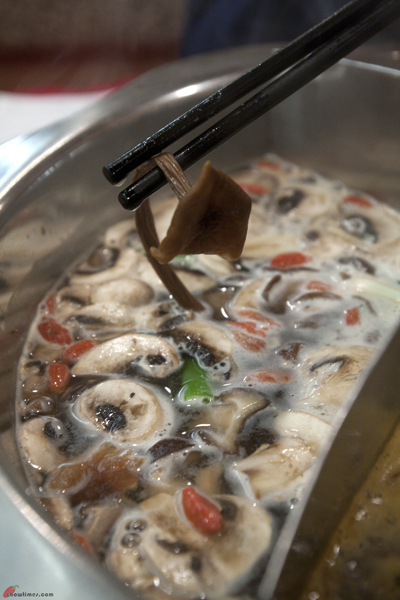 Here, this is the woody mushroom I was talking about. What do you call this?

The above is one of their specials. They call this a special pork ball. We expected to see balls but this is good. As a matter of fact, it is better this way. With this you gotta thoroughly cook it through and try to flatten it a bit before it gets thrown into the the pot. 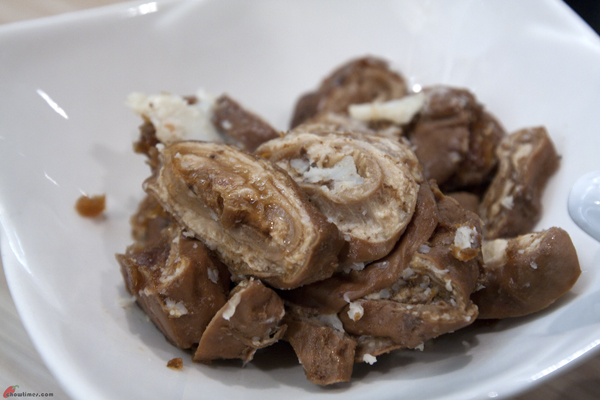 The spicy pork intestines, also part of their specials, is pretty good too. It does shrink in size but it is flavourful because it was nicely marinated before hand.

This is the other two of their specials: the fish with ground pepper (which was numbing spicy from the peppercorn in it) and the beef with spicy sauce.

Yeah, all four of their specials are pretty good. 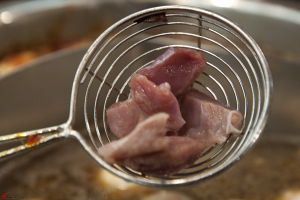 I like it. I like the crunchiness and chewiness of it. BTW, where is the gizzard located in my body? Is it near the liver or something? 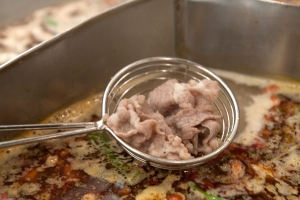 Their meet slices were just so-so. I had fattier ones and fresher ones too. Not that this matters a heck lot to me anyway. We usually order a second round of these but we did not this time.

But what we liked a lot was the lamb slices. This one, we ordered three servings … which we ended up regretting because it was so much at the end of the meal. It was a struggle to finish it. 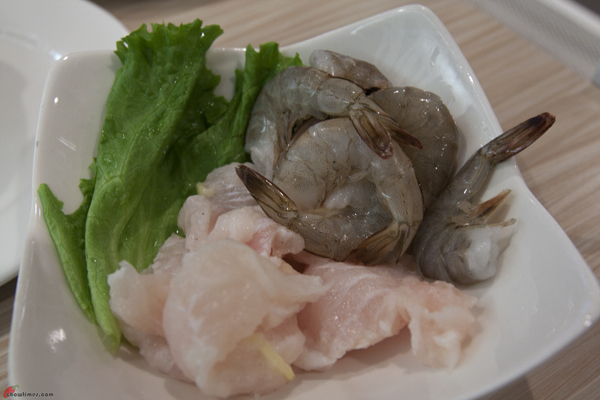 The fish slices was good. We like it with the mushroom soup. If we throw this into the spicy soup, it end up killing the taste of this delicate meat.

The prawns while looking nice uncooked shrank a lot in the cooking and making it not as desirable.

The other stuff like enoki mushrooms, bean curd skin, mushroom and bamboo shoot was OK except for the bamboo shoot. It was so hard and woody that it is virtually inedible. I took a bite and left it be. Is there a way to eat this?

Then there is the various meatballs, tofu, fish cakes, beef tripe and gizzards (which I mentioned earlier). The meatball was denser and harder. Not that it’s a problem, am just saying. 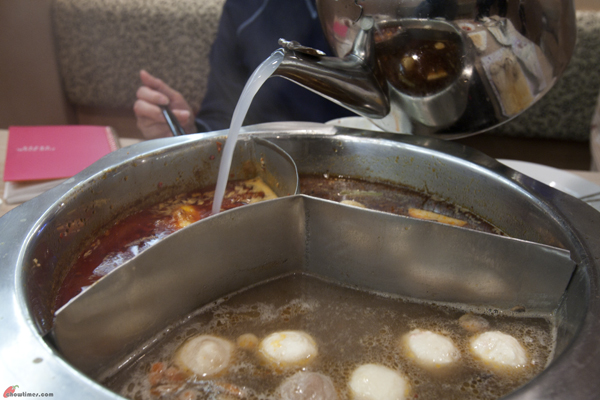 The service was very good. There are three waitresses working the floor and they are like hawks. Once a plate is empty, it gets swooped away. They offered to fill the broth constantly but I thought that it was asking too many times. I want control the broth in that all the food has to be all taken out first before they add more.

Anyway, they add the same broth to all the soup. So it does dilute the spiciness of the spicy ones. That wasn’t a problem because Suanne was saying that she “ teng mm soon” (can’t stand) the spiciness halfway through.

I always wondered how the before and after soup taste like in comparison. So, I save up a bowl of the mushroom soup before any food gets into the soup.

For drinks, we were told all you can drink is $2 per person but they are all canned pop drinks. We didn’t want pop drinks. The waitress suggested plum juice which was $5 and we said yes.

But the plum juice came in a bottle. I assumed wrongly that they make it in house like many other hot pot restaurants do.

New Concept accepts cash only. See what I mean? A $17 AYCE hot pot is more than almost $30 and that is before the tips.

Actually, the whole three soup hot pot concept is just a gimmick. We find that we focus on just one soup we like and ignore the others. As a matter of fact, we were the ONLY ONE who ordered a three soup hot pot. All the other tables had either the one soup or two soup ones.

BTW, we felt very thirsty during the whole night after the meal. They must have loads of MSG in their food. All in all, New Concept Hot Pot is nothing out of the ordinary. With so many good hot pot restaurants in Richmond, this is not at the top of our choices.

Tags: All You Can Eat, Hotpot, Restaurant Review, Richmond