Unlike last year when we pretty much went around tasting the CRA award winning dishes on our own, this year we decided that we want to go try these dishes with others. One of the reason is because many of the winning dishes these year is expensive. There is very little point bringing our boys to these dinners because all they care about is salted fish fried rice. Yeah, to them crabs are hassle to eat and they prefer fried rice over them.

So we met up with JoyLuckClub and BR. We wanted to meet up to discuss something too and so we suggested to meet in Rainflower Restaurant. Some of you may know that JoyLuckClub is a blogger and she blogs on A Wok in the Tuscan Kitchen.

With a blog name like that, I had initially thought that they were from Italy. It was not. It’s just that the Tuscan reference is of their garden. They must be very proud of their garden. I gotta see what the fuss is some day.

Just a bit of a background (you probably can deduce it from JoyLuckClub’s blog anyway) … JoyLuckClub is Asian and BR is white. And I was hinted to go easy with BR. LOL! I was thinking … shoot! I guess I can’t order chicken feet, pig stomach, chicken knee joint, pork knuckles and stuff like that.

I was also thinking … “does that mean I should stay away from ordering the award winning Baked DURIAN Pastry?” No way I am not going to order that. LOL!

Suanne and I had never been to the Rainflower Restaurant before. This place intimidates us. We has seen how posh looking it is before and we thought it would be very expensive eating here. So we had never tried it before.

The Rainflower Restaurant is located on No 3 Road and sandwiched between Canadian Tire and Yaohan Center. It is impossible to miss this stand alone building with that bright yellow awning and purplish wall. The restaurant perhaps has the biggest signage of all Chinese restaurants in Richmond.

Parking here is horrendous. You have to be careful here. If you are eating in Rainflower, you need to park in the car park in front of Rainflower. Don’t think that you can just park in Yaohan Center or Canadian Tire and walk over. There are people who will pounce on your car the moment they observe you parking in the wrong place.

I managed to snag a spot at the back of the restaurant. There are some spots at the back which not many people know about. JoyLuckClub is a veteran in this place. They parked in Yaohan Center, walked into the shopping mall and then walk out again. I did not ask if they walk in and out via different entrance. If you want to pull that trick, you must walk in from one side and out the other. The tow truck people have dollar $ign$ in their eyes.

The dining hall is very big, very cavernous. This place used to be Mark Work Wearhouse and later on XS Cargo before they made this into a restaurant. So you can imagine the high ceiling and wide column free dining area.

I like it. It is quite fancy but it is also somewhat dim for a dim sum restaurant. I noticed this because this is one place I had difficulty taking pictures for dim sum.

Despite the site the restaurant is very busy and they managed to fill almost the entire restaurant. 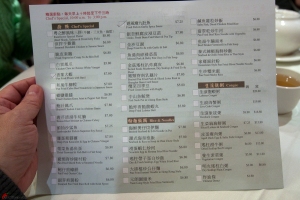 Hehehe … JoyLuckClub remarked that Suanne and I took a long time going over each and every item. This time we are a bit more careful because of you know who. LOL!

I like their dim sum menu. The page on the left is the steamed dim sum items – mostly the normal things like dumplings, buns and such. This page is not particularly exciting. The items here are priced from $3.25 to $5.80 and is available from 9:00 AM through 3:00 PM. So it was not as expensive I thought. As a matter of fact, for a setting like this, I thought the prices were very reasonable. 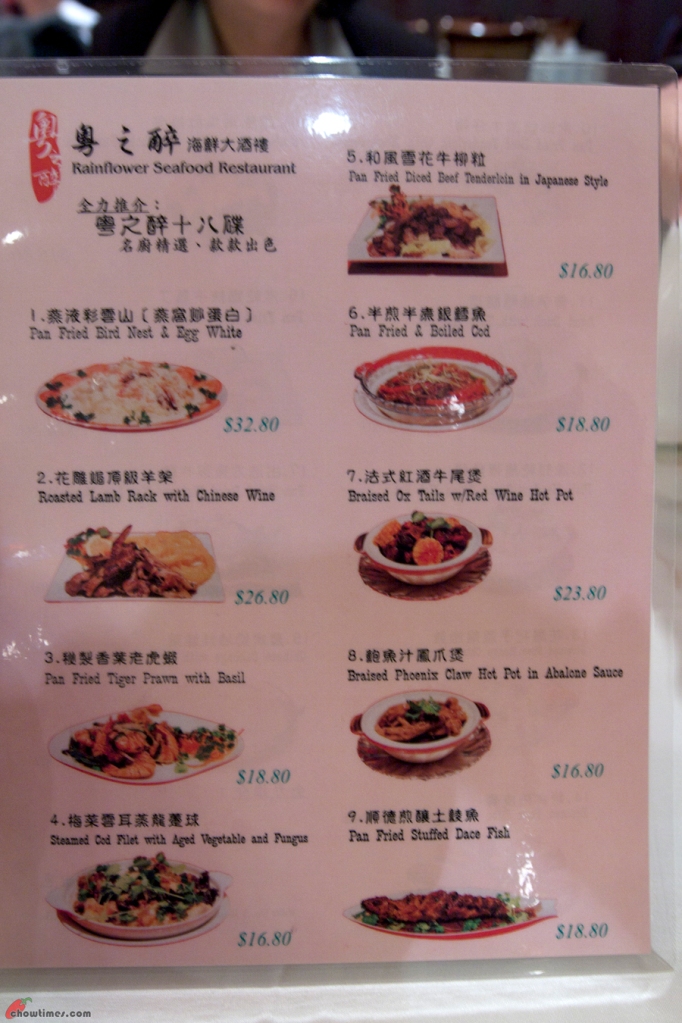 The Rainflower Restaurant won two CRA awards this year. The first award was the Baked Durian Pastry which we located on the menu. The other award winning dish was nowhere to be found. It is the Roasted Lamb Rack with Chinese Wine.

I asked one of the captains about it and he brought us the menu above. It is obviously not part if their dim sum menu but he told us that we can order this if we want. So we ordered it.

The Baked Durian Pastry (on their menu it is called Durian Roll) looked every bit what I would expect from an award winning dish.  The pastry was … very flaky and delicate and yet the layers looked so perfect. 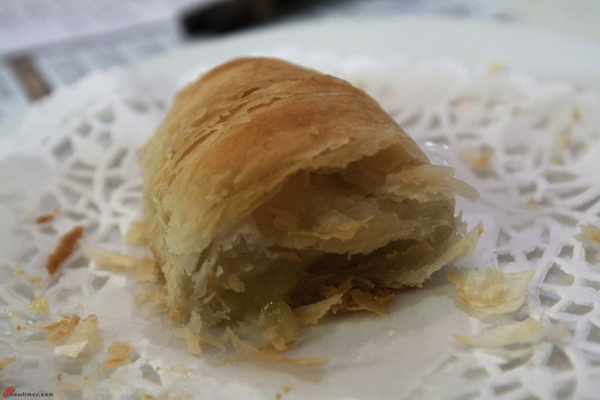 The pieces were rather big. We all like the warm gooey, creamy custardy durian flavoured fillings. The filling is quite firm too.

I was impressed … BR gamely ate this. Actually this is not that bad. For the uninitiated, this would be a good introduction to durian.

The Baked BBQ Pork Bun was $4.00. You can never go wrong with ordering this. I have yet to come across anyone who doesn’t like this type of bun nor is it easy to find anyone who can botch making this. So this is a safe order.

I like ordering this because this is a cross between the pineapple bun and the char siu bao (BBQ Pork Bun).

I can’t mention enough that the best pineapple bun is from Lido. I love the pineapple buns there especially when it is fresh out from the oven.

The “pineapple” topping was crumbly and the fillings was sweetish and moist. Nice … just nice, not very nice. I had better ones before. Personally, I prefer the ones from Garden City Hot Pot.

I wanted JoyLuckClub and BR to try the Chan-Chuen-Fun (Chan Village Noodles). In their menu it is called Steamed Noodle, Spareribs in Black Bean Sauce.

It turned out to be a disappointment. The serving is small and the presentation was poor. It is so dry and hardly any “jhup” in it. The spareribs seemed to be cooked separately and just topped on the noodles. 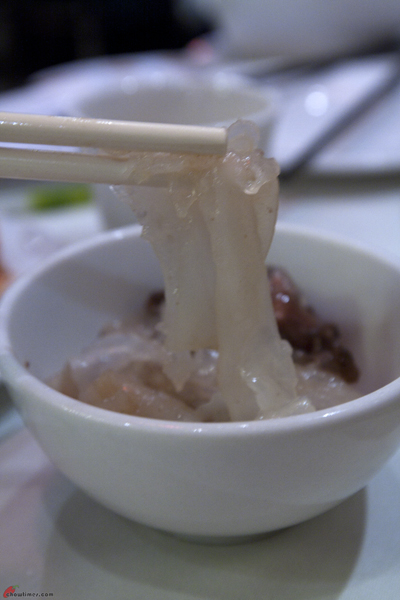 The noodles is too soft and breaks easily. I like the ones from Kam Wah Loong and Good Choice better. 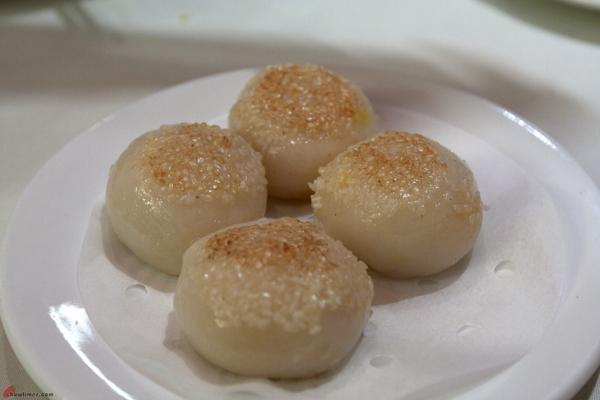 The name Milk Pan Cake sounded nice. Not knowing what it was, we ordered it anyway. This is $4 and comes in four mini cakes which is topped with sesame seeds. 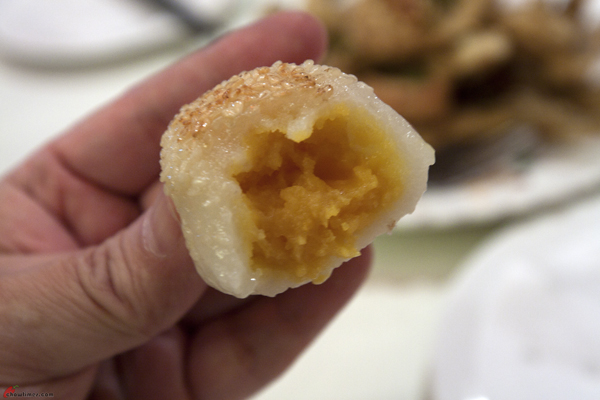 This was just so-so. The outside is tender, soft and a little sticky. Inside, it is filled with egg custard with salty egg yoke flavour. This would be better if the egg custard is a bit more gooey.

The Fried Fish in Garlic Spicy Sauce ($7.25) looked like smelt but without the eggs. The spicy garlic bits are really spicy and does give a real kick.

Hey errr … Suanne and I had been trying to find smelt with eggs but we had never come across any at all. You know what I am talking about? It is those that we see a lot of in the rice combo stalls in food courts. Do you know where we could find them? 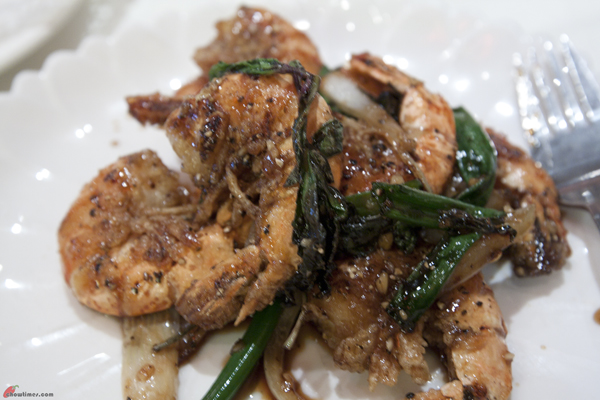 To me the Chef’s Special Pan Fried Prawn with Basil ($7.80) is the best dish of the day. Too bad it is a small serving.

The shell is so crispy that I ate the shell too. That is the best part, I tell you. At least if you don’t eat the shell, you must suck every drop of juice from it.

The prawns are tasty and sweetish. 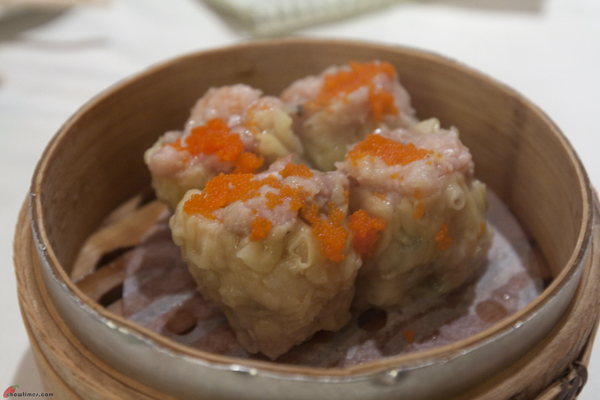 The Steamed Siao Mai with Shrimp & Pork looked good. I did not try this because I know BR likes this. The siu mai looked rather small to me. 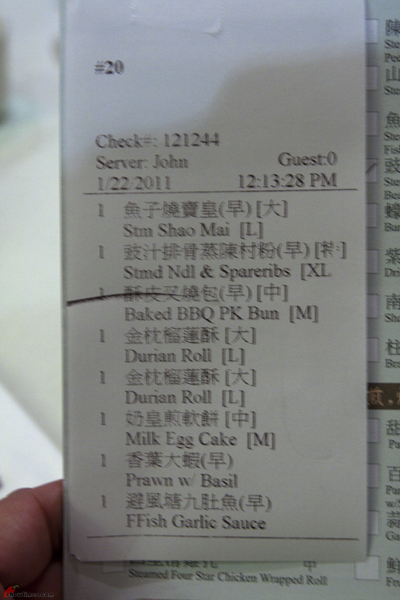 A strange thing happened. After we had the first Durian Roll, they brought us another one.

It seems that they made a mistake. Instead of the other award winning dish (the Roasted Lamb Rack in Wine), they gave us another Durian Roll. They entered the order wrongly.

But then we were already too full and decided to just forgo the Roast Lamb Rack. Guess I have to come back again or else my life can never be complete. 🙁 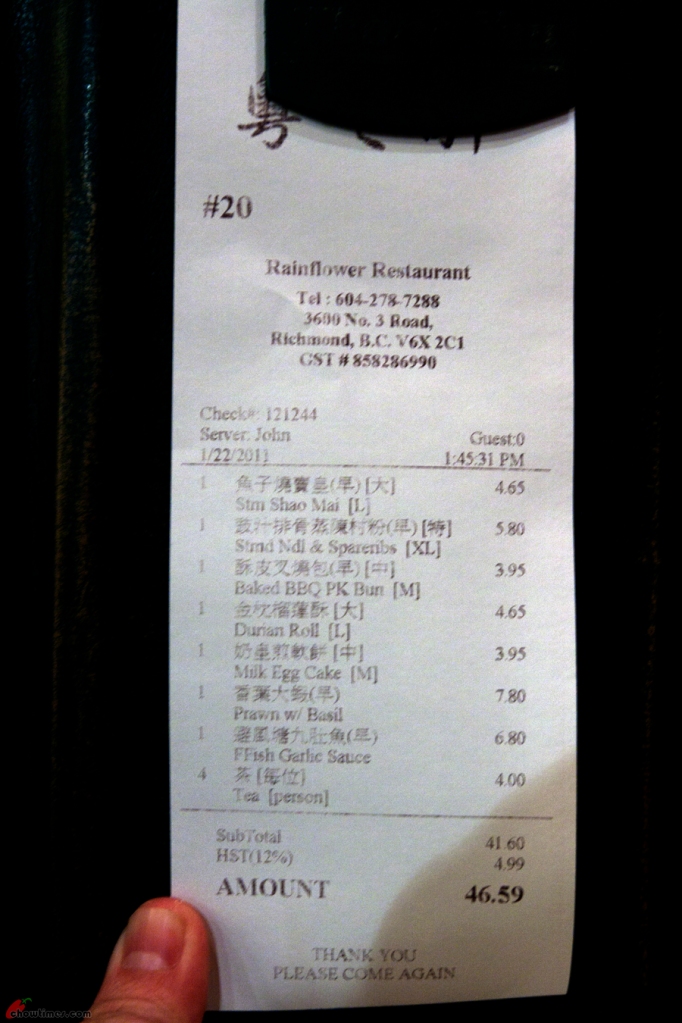 The dim sum in Rainflower Restaurant was not as expensive as we thought it would be. It is a bit pricier but quite affordable. Frankly, I wasn’t too impressed with the overall meal but it was made up by the great company.

Suanne and I had a great time meeting up with JoyLuckClub and BR. We spent two hours there which was much longer than we normally spend for dim sum. So thanks a lot JLK and BR for coming out.

JoyLuckClub wrote about the dim sum in her blog too. It is here … go check it out!