Suanne and I went downtown to cover an event a couple of weeks ago.  Since the event was late beyond our normal dinner time and does not really serve food, we decided to just go check out the place which Rey was raving about. 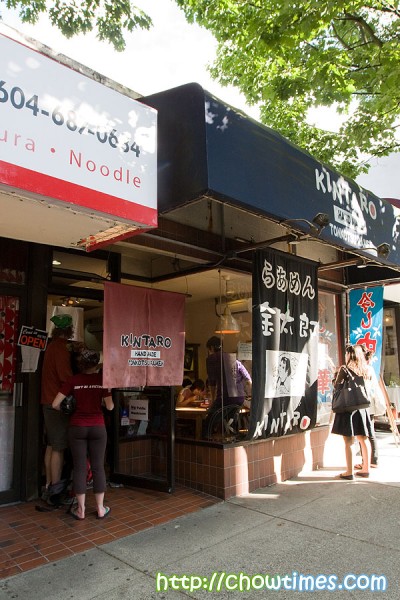 We had seen lines outside the small restaurant before and it was something that put us off trying Kintaro.  This time we were there at 5:30PM, just before dinner rush hour.  There were tables available at that time.  However, by 6PM there were already people patiently waiting outside the restaurant for a table.

Despite its popularity, the restaurant is unbelievably small and if I could add, spartan.  I guess it is the charm of a place like this.  It is its simplicity that adds to the charm.  In Kintaro, it is all about Ramen, and about Ramen.  I always believe that a setup like Kintaro is best left as it is … i.e. they should not change a proven formula by expanding this place or remove the long lines!  LOL! 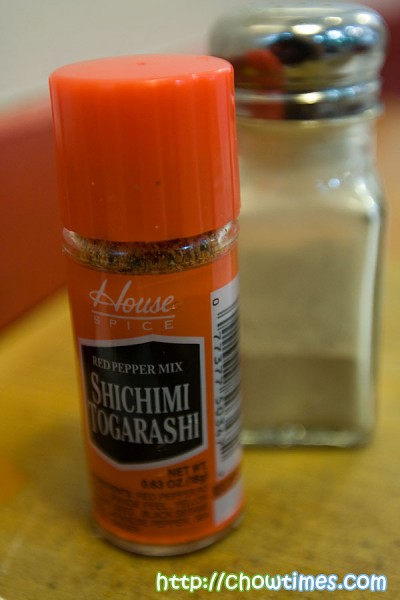 I absolutely had no idea what they were all shouting about throughout the time we were there.  They shouted the moment we walked in … each time a customer walks out or make an order.

Service was polite.  They were polite and patient when they took our orders even though we had so many questions on their menu.  I guess it was OK then because there were not so many customers.  When the lines starts to form, they were politely coming around very fast the moment we put down a chopstick asking if we are done.  I understand that they wanted to turn the tables as fast as they can.  They did it politely and we understand.  Kintaro is not a place where you would dine … I say spending 45 minutes here is stretching it a bit too long during peak hours.  It’s order-eat-pay-go here.

The Red Pepper Mix above (called Shichimi Togarashi) is a common Japanese spice mix used for soups and noodles.  It’s a mix of 7 kinds of ingredients. 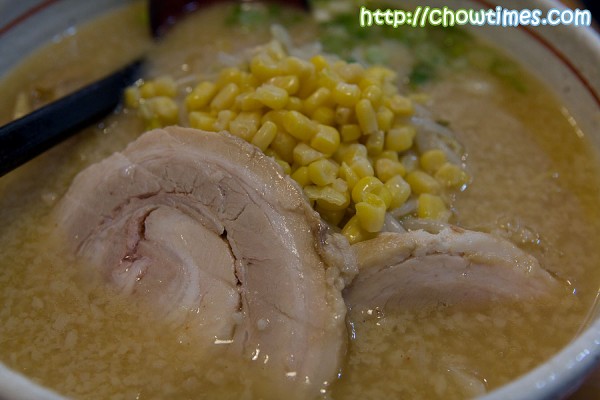 At the time of ordering here, you need to decide on the richness of the broth (rich, medium or light) and either you wanted fat or lean pork.  We asked for RICH broth and FAT pork.

Kintaro’s menu says that their soup is flavored with a blend of soy bean pastes from 4 different Japanese regions and twelve spices.  Whatever it is, the soup was very flavorful.  The broth was way too rich which somehow made us feel full.  We should have asked for medium instead.  You could ask for additional toppings ranging from $1-$2 but we did not bother with that.

There were 2 big slices of rather thick pork with mouth-watering marblings.  This was like the ultimate in pork … goodness-delicious melt-in-your-mouth type.  It was way better than the rather comparatively pitiful ones we had at G-Men — no comparison really. END_OF_DOCUMENT_TOKEN_TO_BE_REPLACED

We know that both Arkensen and Nanzaro will like ramen. They devour MSG-laden instant noodles so much that we buy instant noodles by the box (30 packets!). They can easily finish 2 packets even after having a full dinner. So, Ramen will be up their alley.

G-Men Ramen is located in the Continental strip mall on Sexsmith and Cambie. It is on a corner shoplot which used to be a pho place.

We were there at about 11:15AM thinking that they would have opened by then as with most restaurants in Richmond. At that time, there were already three parties waiting for it to open. The sign outside said they open at 11:30AM but it was not until 11:45AM before they open the doors. At that time, I counted 15 people already waiting for it to open. 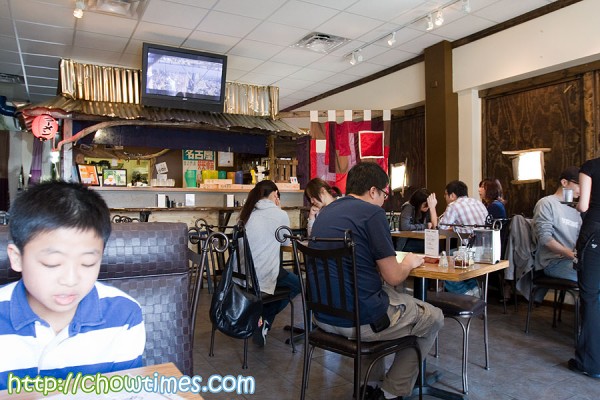 Frankly, I think they did not use their brains at all. Even if they are not ready (and late!), they could at least have opened the doors to the customers and let them have a seat and explain they need more time. The customers would have understood. So, some of the customers were fuming mad … a hungry customer is an angry customer. Simple as that … the staff need adult supervision. LOL!

Their menu is simple … just two pages with big prints. Of course, the main items are Ramen. There are four types of ramens costing between $8.00 and $8.50. Extra toppings and noodles are anywhere between 50 cents to $3.

Even though we were the fourth party shown the table, it actually took a long while before we got the ramen. I was expecting it to be served very fast since I reckon that it’s just pouring prepared soup into the bowl.

Arkensen ordered the first item on the menu. The first item on most menus are the specialty item. It is the authentic Tonkotsu (“pork bone”) Ramen with its distinctive cloudy broth. The broth is simply the most flavourful and richer compared to the other ramens we ordered.

END_OF_DOCUMENT_TOKEN_TO_BE_REPLACED

Not sure about you but Ramen does conjure images of school days when we could not afford three square meals and all we had was meals after meals of instant noodles. For some reason, I loved instant noodles then. Am not sure what it is about instant noodles and kids … my boys are simply addicted to those stuff too. 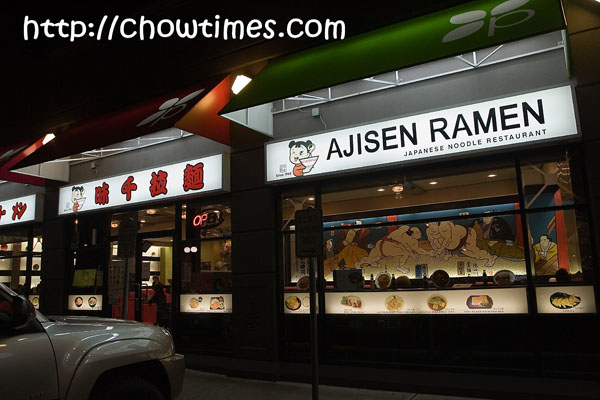 We went to Ajisen Ramen not too long ago for dinner with Nanzaro. Since he likes noodles, we thought we should just give it a try. Ajisen is located in the Parker Place Mall in Richmond. It’s on the eastern side of the mall, the part facing Hazelbridge Way. You won’t miss it, driving along Hazebridge.

Inside, it does look kind of Japanese with gaudy coloured pink chairs and all. When we walked in they shouted greetings in Japanese. I’ve never been to Japan before but my impression of how a Japanese restaurant is like is exactly just like that.

Despite that pretense, to us it is a Cantonese restaurant because the people who work there all spoke in Cantonese.

We got seated and was promptly handed the menu. ALL menus should be like these if you ask me. Simple names and pictures to show how it looks like (or at least how it is supposed to look like). I like especially the “Recommended!” notations above some of the dishes. It takes brain work out of choosing from an unfamiliar menu.

The condiments on the tables were interesting. END_OF_DOCUMENT_TOKEN_TO_BE_REPLACED