We know that both Arkensen and Nanzaro will like ramen. They devour MSG-laden instant noodles so much that we buy instant noodles by the box (30 packets!). They can easily finish 2 packets even after having a full dinner. So, Ramen will be up their alley.

G-Men Ramen is located in the Continental strip mall on Sexsmith and Cambie. It is on a corner shoplot which used to be a pho place.

We were there at about 11:15AM thinking that they would have opened by then as with most restaurants in Richmond. At that time, there were already three parties waiting for it to open. The sign outside said they open at 11:30AM but it was not until 11:45AM before they open the doors. At that time, I counted 15 people already waiting for it to open.

Frankly, I think they did not use their brains at all. Even if they are not ready (and late!), they could at least have opened the doors to the customers and let them have a seat and explain they need more time. The customers would have understood. So, some of the customers were fuming mad … a hungry customer is an angry customer. Simple as that … the staff need adult supervision. LOL!

Their menu is simple … just two pages with big prints. Of course, the main items are Ramen. There are four types of ramens costing between $8.00 and $8.50. Extra toppings and noodles are anywhere between 50 cents to $3.

Even though we were the fourth party shown the table, it actually took a long while before we got the ramen. I was expecting it to be served very fast since I reckon that it’s just pouring prepared soup into the bowl.

Arkensen ordered the first item on the menu. The first item on most menus are the specialty item. It is the authentic Tonkotsu (“pork bone”) Ramen with its distinctive cloudy broth. The broth is simply the most flavourful and richer compared to the other ramens we ordered.

Nanzaro quickly booked the “Sunday Special” since his older brother beat him to the first item. The boys learn fast … these days Suanne and I had to settle for third and fourth choices.

The “Sunday Special” is described as special homemade dry noodles with lots of pork and toppings and special homemade sauce. $8.50. The dish includes pork slices, green onions, black wood ear mushroom, and marinated free-range egg. This is the second consecutive dining in a Japanese restaurant that has “special homemade sauce” … why can’t they say what it is exactly?

I can’t make out the difference between Suanne’s and my ramen. I only know that we ordered a Shio Ramen and a Special Shoyu Ramen. Both of them costs the same, $8.50.

I did notice that people slurp the long noodles from the chopsticks direct from the bowl. I recall learning from TV shows that the Japanese are encouraged to slurp the noodles loudly. Can someone confirm?

I think the only difference is the type of soup used. I think Shoyu sounds like soya sauce in Chinese and so the top picture must be Shoyu.

Tell me about the use of soup spoons with the ramen. I guess the right way to drink the soup is to drink it direct from the bowl and the way they do it in Japan is not to use the soup spoon. Is that right? LOL! For the Chinese, it is uncouth to do so. I don’t know for sure … am just asking. 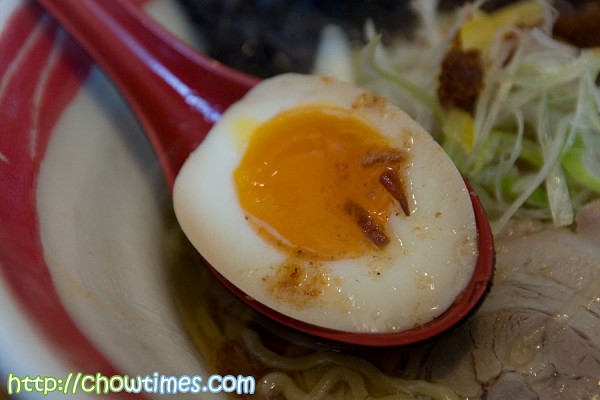 I like their marinated eggs (called Ajitama, I think). It is a hard boiled egg but had a soft almost uncooked yolk in the middle. How did they do this? I am sure it is a simple technique. Suanne doesn’t take eggs and so I get to gain. 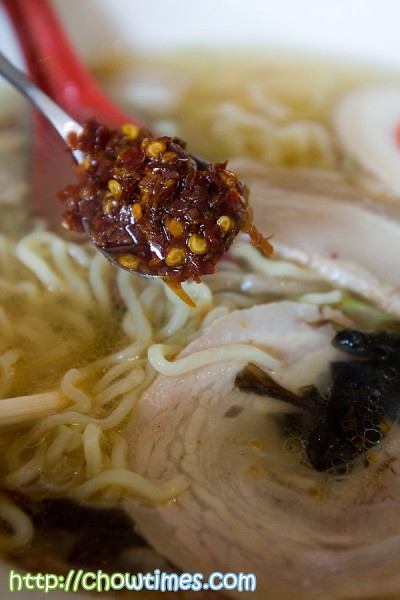 Oh … their chili is awesome. It is really spicy hot and adds a lot of kick to the already flavorful soupbase. Nice. 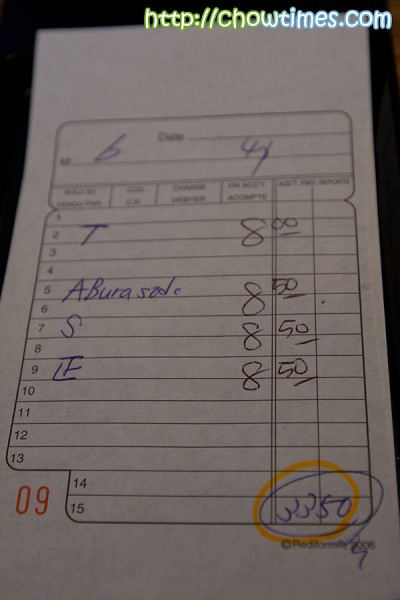 The total bill came to $33.50 before tips. We enjoyed the meal but do think that they are still having teething pains having opened for just one month. Already I can see they are popular and is successful in such a short time. It makes me think that Richmond really needs more places like this … or in another word, we had enough of Shanghainese and Szechuan restaurants.

Be warned though … they are opened only from Thursday to Monday (closes on Tuesdays and Wednesdays). Go early or be prepared to wait for a table. If there is a queue, just fill in your name yourself on the writing board by the entrance and wait patiently.