There is a new Pho in town. It’s called Pho 99. We saw it on the adverts they placed on the local papers.

It’s always a test of will with Nanzaro but I win most of the time because I pay the tab. This time I let him win because Pho 99 is a new place.

What surprised us was that Pho 99 is located in the same spot as one of our favourite eateries, Coco Chilli. We blogged about Coco Chilli here before.

So, Pho 99 is located along the far eastern end of Alexandra in Richmond. They apparently have 6 outlets in all and surprisingly, two of which are in Bellingham and Seattle in the US. Wow … an international Pho chain, so to speak.

Inside, it looks virtually the same as when it was Coco Chilli … the same fake coconut trees were still there. The operations were new and I could see that the waitresses were quite uncertain of their own menu. But they were very eager to please though and that is good. 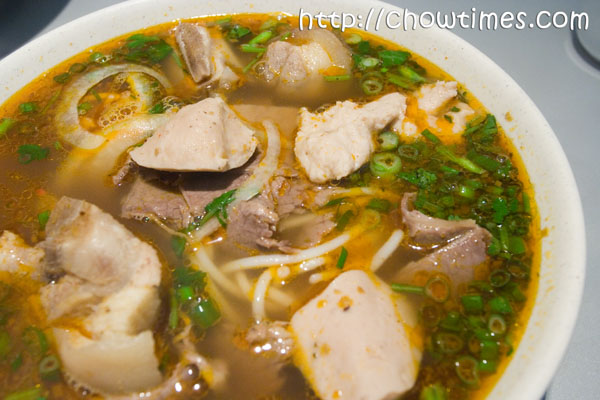 The above is called the Hot Spice Rice Noodle, Beef Shank, Beef Flanks and Pork Ham. It costs quite cheap, $6.75 — not a lot cheap but certainly cheaper than most other Pho places. It is a lot more spicier which is great.

Their Pho is pretty good. We had the Noodle Soup with Eye Round Steak and Fatty Brisket. This Pho is listed under their “Adventurer’s Choice” section. I like this one better than the normal dry tough briskets that other places normally put into their pho.

I am not sure about you all but to me Pho must always be served in a huge bowl. Here they do that. All large bowl of phos are $6.65.

The free bean sprout is really small. We never touch the basil leaves but we do see many people plucking the leaves off the stems and threw it into the soup. Must try it someday.

Next was the Marinated Grilled Lemon Grass Pork Chops. The pork chops were quite big and most importantly they are very moist and juicy. It was perfect and I am sure a lot of you would like this as much as I did. This one costs $7.90 — not bad, huh? 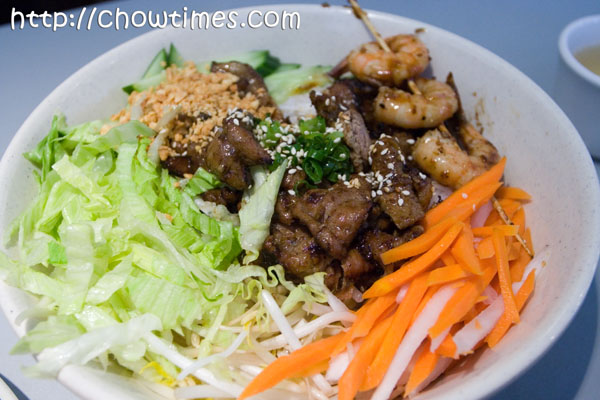 The above is the Vermicelli Bowl with Veggie Marinated Prawns and Grilled Pork Slices. The vermicelli is hidden below the heap you see.

I am not sure if this is the right way but we always pour the entire bowl of the fish sauce into the the vermicelli bowl. Hmmm … thinking about it, Suanne does not make fish sauce at home but am thinking this stuff could be great with many other dishes. Can you think of what this would also be great with? Also, please educate me … is fish sauce only common to Vietnamese cuisine? Or do other cultures use this too in their cooking or food.

West Lake Vietnamese Kitchen: The Return of a Family Favourite