You know, one of the things we enjoy a lot with food blogging is when we get invited to events. Suanne and I was invited as “media” to cover the Taste BC event which held on Thursday last week. Ooooo … “media”, fancy huh? LOL!

Angie (Sea Salt with Food) who is a wine enthusiast joined us. We like that because we are such babes when it came to wine and we wanted to learn from the event. I thought that we would only spend like 30-45 minutes but ended staying for almost 3 hours. We had a great time at the event. 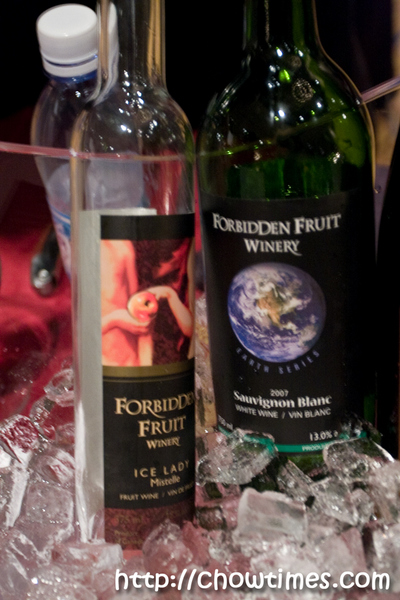 Taste BC is more of a wine than fine food event. The event is presented by the Liberty Merchant Company in the effort to bring together the best of BC wines. All proceeds from the event went to the Oak Tree Clinic of the BC Children’s Hospital. I am afraid we did not take many photos of the wine although I did try quite a lot that night.

Our favourite was simply the Ice Lady ice wine from the Forbidden Fruit Winery. Surprisingly, almost all the food blogs that covered the event also picked this as a favourite. I want to say that no one pushed this to us to blog but for some reason it just stands out. It is made of Pink Lady Apple and is very sweet and fruity. It does not reek of alcohol at all. Suanne who does not drink loves this.

I also like the Victoria Gin. They first gave me a shot of Victoria Gin which was awful, like drinking jet fuel. Then they added Tonic Water which made it like a million times better. Nice.

We also had sake and learned a lot of flexibility of this brew … that how this is about the only liquor that can be served both hot or cold and its ability to be paired with any type of cuisines.

The Garibaldi Honey Pale Ale (from the Howe Sound Brewing Company) was another one I like … it was smooth and light with a hint of honey.

In all, there are over 60 wine and drink participants with an average of 5 types of wine showcased. It was impossible to try every one of them for sure … for us at least. On to food … 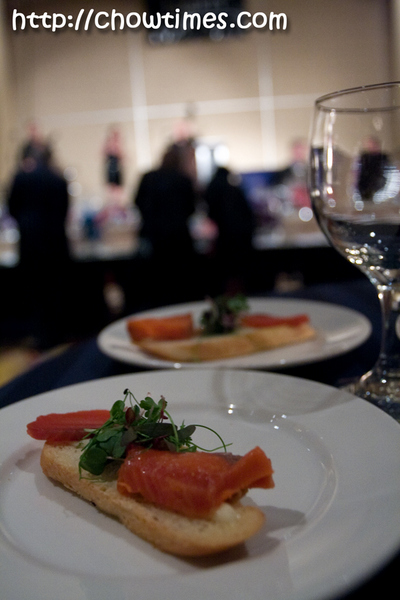 The Wild Sockeye Salmon on Artisan Bread was presented by a “baby” restaurant in Gastown. It is interestingly called “2 Chefs and a Table” which had just opened for 7 months. 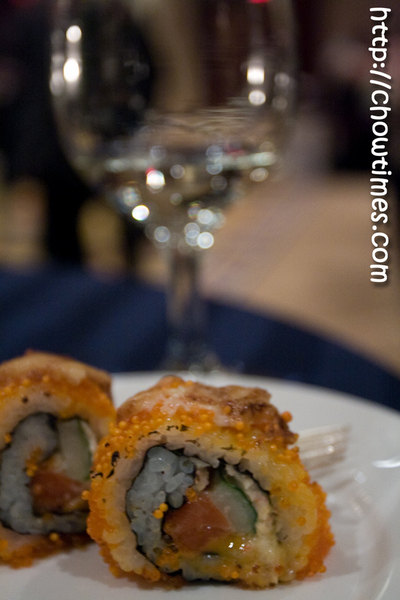 We like the sushi from Miku Restaurant a lot. As a matter of fact, we went back for seconds … and thirds … and fourths.

Gastropod showcased the Parsnip Gougiere, Fraser Valley Duck Rillette, Ras el Hanout salt. A long name but it is like a tiny little bun with stuffings.

The Benton Brothers Fine Cheeses counter had the longest line of all. It was because almost everyone had what I had … “one of each”.

O’Doul’s Restaurant and Bar served mini burgers of sorts. It is called Pemberton Meadows Beef Dip with Tomato and Ale Reduction. The Pemberton Potato Crisp is real good too … like mini potato chips but made really small and thin.

The Rodney Oyster House presented a selection of locally-grown oysters. They shuck the oysters right then and there. I had it with Shallot Vinagrette. Suanne took one although she never liked oysters … she still hates the slimy texture.

Whole Foods Market was there showing their sauces with turkey sausages. They had the beer, hot and lime sauces … very good, especially the hot one which was really hot. I can’t remember the name of the sauces though.

La Baguette and L’Echalote showed their pate, canope and tapenade sundried tomatoes. Suanne and I are just not fans of these.

Finally the Mon Bella Bistoria had the Salt Spring Island Mussels in shell with Olive Tapenade. It was tiny mussels and I sort of miss the point of this.