I could not believe my eyes when I saw the yellow banners in Barcelona.  I knew that the Tour de France is going on but I did not realize that they had chosen Barcelona for the stage outside France.  Not only that … TWO stages were held in Barcelona. 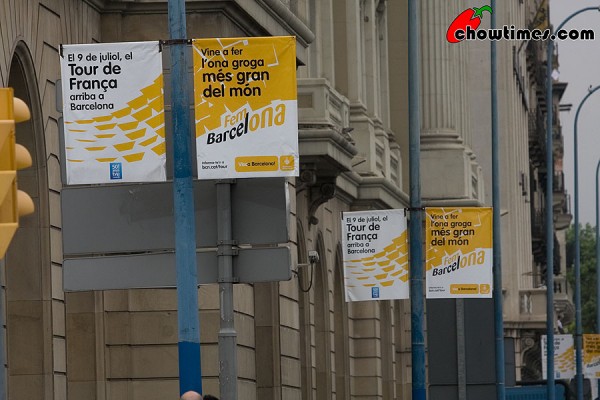 It was Stage 6 (Gerona to Barcelona) and Stage 7 (Barcelona to Andorra) that involved Barcelona.

I love cycling.  I used to cycle 40+ km to work almost every day of the week.  I stopped doing that ever since I had a wipe out two winters ago and ever since then, my Giant TCR-2 road bike had been sitting on the bike stand at home.

When the Tour de France was going on in summer, I would go to work late because I wanted to watch each stage to the end.  That was when Lance Armstrong was reigning supreme.  Guess what … Armstrong is back on the Tour again this year and I am not going to miss this chance of a lifetime.

Look at those toned muscles.  It was a good thing I decided at the last minute to bring along the 70-200L 2.8 lens with us on this trip.  Along with the 1.4x extender and with the crop body of the Canon 40D, I had quite the reach I needed.  The long lens was heavy to carry around on vacation but it sure paid off. 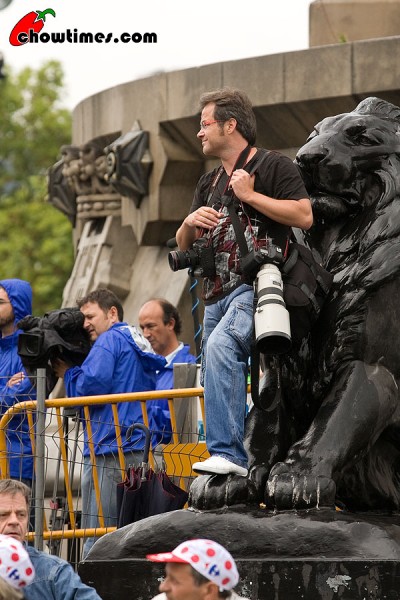 Well, my lens was not nearly as long as the many professional photogs we saw.  This guy’s lens must be 300mm?  400mm?  Must have cost a fortune.  Suanne will never allow me to buy one of those. 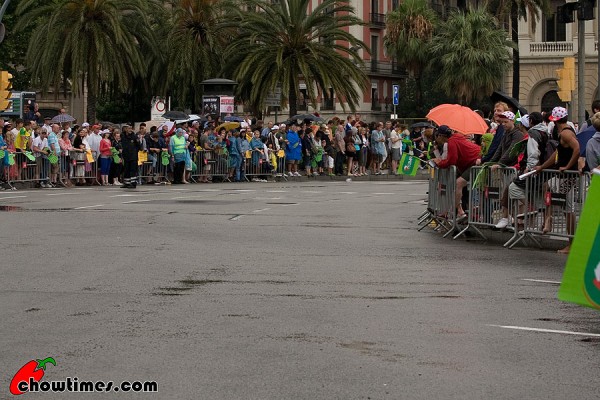 Our hotel conceirge was extremely helpful.  He spent 30 minutes helping me find a great spot to watch.  I was so impressed that even though he did know much details of the Tour in Barcelona, he did the research on the internet with me and plotted painstakingly the entire city route where the tour will pass.  So with the custom map he gave us, we went to the foot of the Columbus Monument.

We were there about 1 hour before the scheduled arrival of the leaders.  I like this spot because the cyclists will need to ride through a double curve around the monument and then ride on a straight wide avenue.  For one hour we did not budge from our spot because once we move, it gets filled and it will be impossible to get a railing side spot again.

The wait was not too bad because there are lots of entertainment before the peloton passes by.

The sponsors have floats and throws out freebies.  Suanne was pretty good catching them.  She got a nice keychain from the French Gendarmarie (military police) and a cap from Skoda which she proudly wore through the vacation.

Her trick?  All around her were guys and Spanish guys do not fight with girls.  Suanne literally grabbed the cap from a guy’s hands and he let her have it.  There are advantages being female in Spain.

After an hour of entertainment, things gets more formal.  Security got tighter as they controlled the people from crossing the streets.

And then from the distance we could hear the roar getting closer.  There were a lot of cheering the past hour but this roar was decidedly different.

To a lot of people’s surprise … there was only ONE leader out in front.  I did not know who he was.  He was standing on this flat stretch and kept looking back behind him.  Well …

… the Peloton came charging through about a minute later.  I can see that the peloton was determined to catch the leader.  The peloton, riding in a group will ride at 45km/hr and expand 40% lesser effort than the leader who is riding alone.  I heard they caught the leader 1 km from the end. 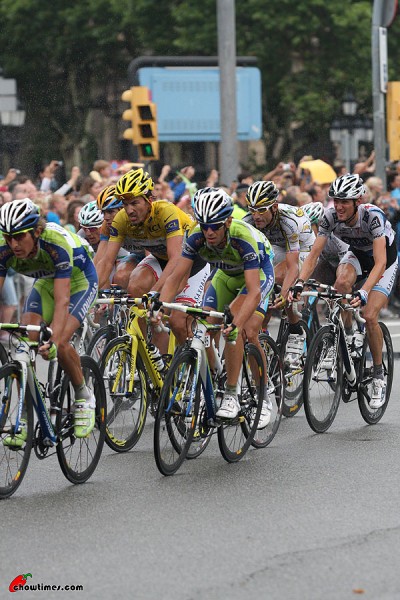 I took almost 200 pictures of the riders alone.  It was one of those rare moment when the rapid fire capability of the 40D came in useful.  The Maillot Jaune was in the middle of the peloton.  The peloton (meaning bullet in French) is the largest pack of cyclists.  I was always amazed with the nerve they had riding at that speed at such close quarters.  One wrong move in the front and one could bring down the entire peloton.

Maillot Jaune is the French term for yellow jersey which is only worn by the current leader of the Tour de France.  This stage in Barcelona is an easy ride and so nothing really happens in terms of standing changes.

I looked high and low for my idol … Lance Armstrong.  It took a while to locate that picture among the 200 I took.  Found him … #22 … right at the back of the peloton.  It really doesn’t matter if anyone is at the back or front of the peloton … everyone is credited with the same time. 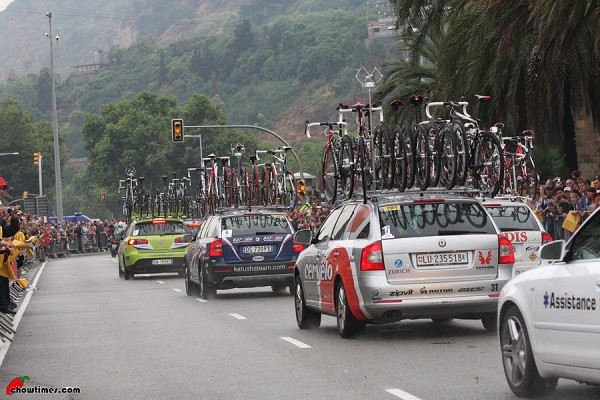 The team support cars came zooming past right behind the peloton.  They do drive so close to one another like they do in a peloton.

At the back are the domestiques.  That is French for servants — the sacrificial lambs of the team.  These are the guys who uses all their energy to make sure that the leader of their team wins.  They also charged with doing things like fetching water for the leaders from the support cars.  They will also expand all energy they have to either pull the peloton or tactically wear out the opponents.  Cycling is more tactical than most people think.

This is not the Pyrenees but I am still glad to be right up there to see for myself the Tour in action.

Here are a selection of the other pictures I took … Enjoy! 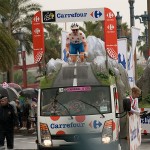 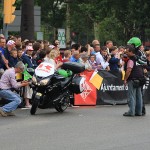 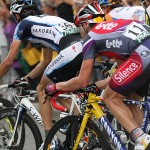 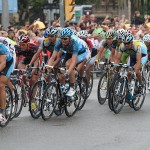 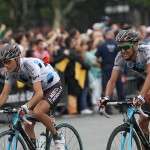 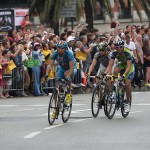 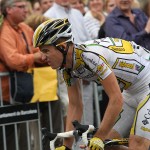 Seville: The Cathedral of Seville

Barcelona: The Picasso Museum, The Chocolate Museum and The Barcelona Cathedral