When it comes to hot pot, Richmond has a lot of choices. As a matter of fact, most of the top Chinese hot pot restaurants are found in Richmond. Just to name a few … Chubby Lamb, Hot Pot One, Point Zero Four Fusion, Garden City Hot Pot, and Mongolian Hot Pot.

There is a new one newly opened in Vancouver that I think will give Richmond’s hot pot restaurants a run for the money.

We heard of rave reviews about Fatty Cow. We also heard that they are expensive too. Hot Pot meals are not cheap anyway and one could easily expect to spend $20 upwards anywhere you go. So even if Fatty Cow was expensive, it was just a few dollars more. So that did not deter us since it was just two of us.

Fatty Cow is located on Victoria Drive at the intersection of 35th Ave. From the outside, Fatty Cow looks very impressive and modern.

We were there early again. When we walked in at 5PM, they were just finishing setting up for the dinner. They open only at 5:30PM and asked that we return later. You know, I wish that restaurants have the sense to allow customers to just take a seat and explain that they are not ready. A simple gesture like that does not take much on the part of the restaurant but customers not only will understand, they will be appreciative.

Well, there was no where to go and it was not exactly a warm day. So we waited in the car until 5:30PM. 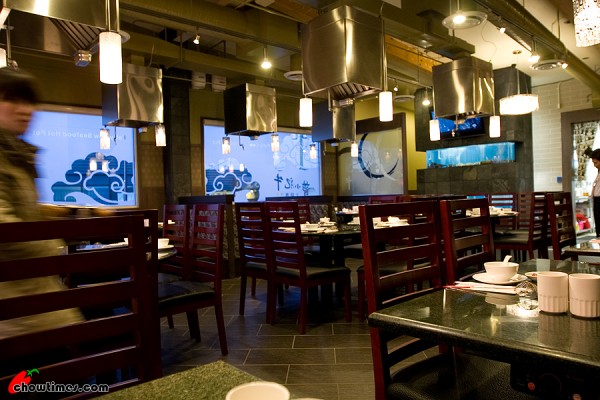 Fatty Cow has got to be one of the prettiest looking hot pot restaurants we had ever been to. It was still new. They had just opened barely a month ago. Everything has a glint to it. Even the workers wears suit like they do in high end Chinese restaurants.

Service is excellent — from the captain to the staff who came by all the time to fill our tea and top up the soup. They even come by every now and then to help us check the temperature. Each time I reach for the controls at the side of the table, often someone will come by and help.

Don’t you like the new dishware and utensils? We do. It was so sparkling clean. They are even logo’d. Not many hot pot restaurants bother to create a logo/branding for their restaurants unless they are branches of successful hot pot restaurants in Asia. So I was just wondering if Fatty Cow is one of such branches. 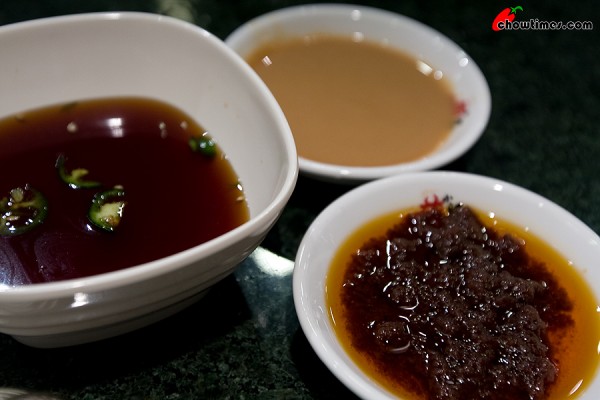 One thing we did not like about Fatty Cow is that they charges extra for sauces. Each serving is 50 cents. The above three is free but if you want additional ones, you gotta pay for it.

Since we like raw garlic we got the above as an extra … 50 cents. Next time we come to Fatty Cow, we will bring our own condiments in small plastic containers.

Click on the menu above for a larger image. As you can see, it is not cheap. It is $20 per person for Monday through Thursday and $21 for Friday to Sunday. And that is just the start. That price does not include the soup base. The soup base is another $7 and $8.50 if you want a double soup. Good thing is the soup base is charged per table and not per person.

There is a very good selection of meat, dumplings, vegetables, seafood, and noodles. They even have premium seafood items which again comes as extra. You can see how the prices could just add up easily.

No, we did not get the premium seafood items. Too expensive. 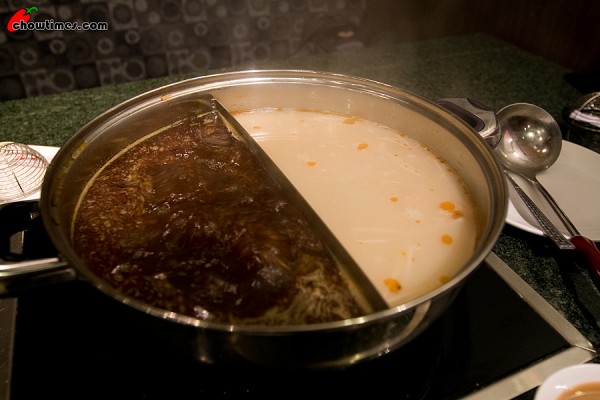 For the soup base, we opted for a double soup base. The left side is called the Fatty Cow Hot and Spicy. We wouldn’t have ordered this if not for the fact they branded this with their name.

The milky soup base on the left side was recommended by the captain as their most popular soup base. This is called spare ribs broth.

I like their burner. It is very responsive. It will boil up the soup in just 3 seconds the moment you crank it up and you could stop the boiling instantaneously too.

The Fatty Cow Hot and Spicy soup base is just that — SPICY. There are lots of peppercorns in it. See above? The above is just one scoop from the soup base. Frankly I felt it was way too much. So much that we ended up scooping it off to the plate and added it back to the broth if we want to spice it up. 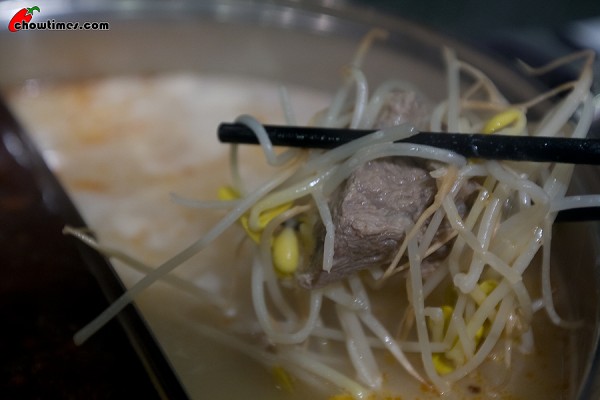 As for the Spare Rib Broth, it was very good. There are a lot of beansprout and even pieces of pork in it. We took the beansprout out because we like the broth not so “busy”.

This thing above is wonderful. It is in the snack section of the menu …

… Fried Fish Skin. It is light and tasted wonderful. They said they make it themselves. It was oily but was just so crispy. This is one snack you should get to start off the meal. 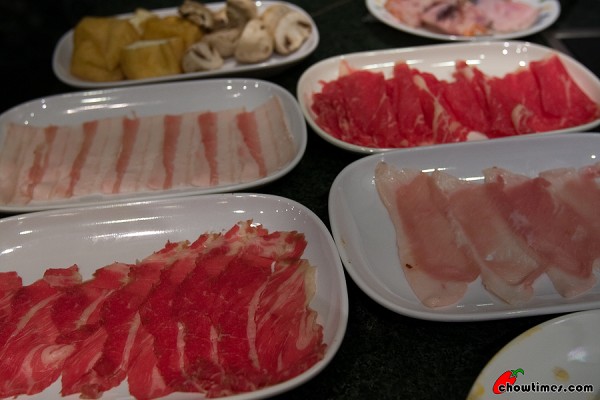 To make your money worthwhile, you should just focus first on … the meats. You know, the beef, the lamb and the pork. The others are just fillers.

The meat is are sliced thinly anyway. So you can order as much as you like and you can be sure you will be able to finish them. Moreover, they shrink when cooked.

This is our technique of having the meats. I understand that you can’t do this when eating with friends but between Suanne and I, we don’t care.

Instead of dumping the meat all at once into the broth, we do that a scoop at a time. Sure it takes longer overall but we can control the cooking better.

Moreover, we just hate dumping everything in and then scooping a whole bunch of mixed meat to eat.

That is how we do that … just cook each scoop at a time. The meats are thin and so it cooks in just seconds.

Trust me, it is more flavorful this way. You really get to taste the quality of the meat as it should be.

Yeah, that is how we like our hot pot. Not a heck lot of stuff thrown in all at once.

I know I am stating the obvious for those of you who had hot pot before. However, there are a lot of chowtimes readers who had not ventured to a hot pot restaurant before.

Well, one thing about the hot pot is that the soup base changes as you cook various stuff in it. It is more distinct if you deal with one type of ingredient at a time. Mostly start with the meats, followed by the seafood, and then the vegetables and end with the noodles. That is our general plan of attack. But of course there are no rules to it. You can do it whatever way you want. 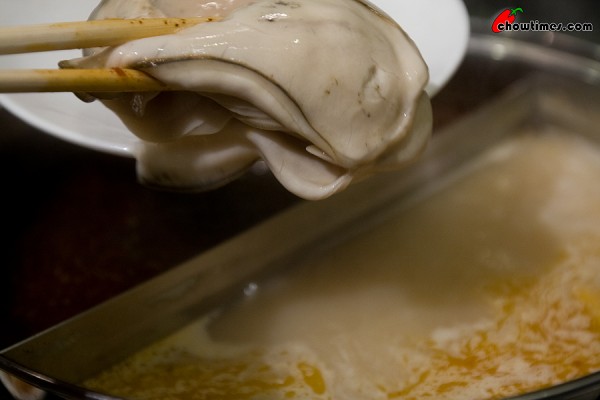 Talking about seafood, their oysters are monstrous. Because it is so thick, it took us a while to cook this. We had to throw it back into the broth when we found that the insides are still cold.

We love their oysters.

The captain told us that they are proud of their meatballs. Very good he said and they made them fresh in house everyday. They were very good — it was tasty and the texture is springy.

Mid way through our meal, the captain surprised us by bringing us two complementary drinks. No, we did not even tell him who we were but it is very obvious to him that we were taking notes and pictures the whole time.

They call this the Sunlight and Delight. They were nice cooling compliment to the hot pot.

So. If you ask me, this is the best hot pot I ever had. Not that I eat a lot of hot pot but there is nothing much you could pin them on.

We especially love the soup base. We did not feel MSG thirst after the meal. I think they uses MSG (almost everyone does) but maybe they don’t use a lot of it. We love particularly the spare ribs broth. Their other broth are unique too. They include:

Oh OK … there is one thing we did not like about Fatty Cow. It is the price and the fact that they charge you for extra sauces and condiments.

Fatty Cow was full on the Friday night we were there. We were seated near the entrance and could see them turning away customers.

The captain said that customers should call in for reservation. They generally try to have two sittings each night — 6PM and 8PM. They do impose a 2 hour time limit.

The strange thing here is that they accept cash only. For pricey meals like this, customers would normally expect restaurants like this to take at least a debit card. We don’t carry much cash in our wallets all the time.

We enjoyed this meal.

Tags: All You Can Eat, Hotpot, Restaurant Review, Vancouver

The Boss Bakery and Restaurant in Vancouver’s Chinatown