There was an interesting question posed to me at a BBQ party we attended last week.

I was asked if my choice of dining is dependent on the dishes or on the restaurant. Without hesitation, I said it is the food, not the restaurant. More often than not, it is because I wanted to try a certain dish. You probably have guessed as much by now if you had been following chowtimes for sometime.

I am often guided by recommendations from our readers who would point out to us certain dishes that they like. Of course too, of late I had been using the CRA list for the choice of my dining outs.

I rarely gravitate to the latest and hippest restaurants, especially if I don’t know what exactly they have on their menu. For example, I will pay more attention if someone tells me that they had this great dish and rave at length describing why it is good; as opposed to some new funky resto opening somewhere in downtown. I find myself asking “what did you have” when anyone tells me of a restaurant.

So there you go … that’s me. What about you? Is it the food or the restaurant that determines the choice of your dining out? 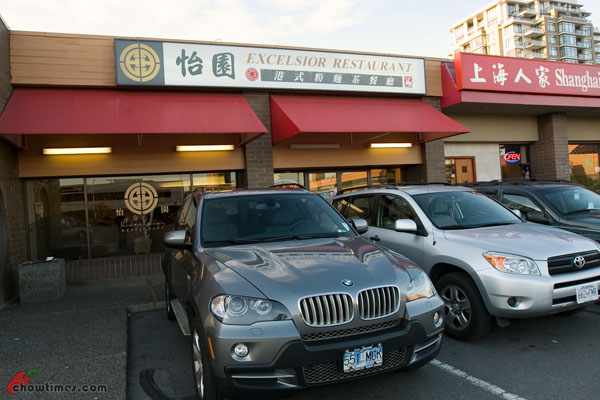 Anyway, we made a return visit to Excelsior because we wanted to try the Lamb Hotpot which won silver in the Lamb category of the 2010 CRA. Our last and only other visit to Excelsior was just earlier this year. We like Excelsior. We had their Steamed Chicken with Soy Sauce which was superbly executed.

Excelsior is located just by the Skytrain Brighouse terminal station in Richmond. That place is unbelievably busy with foot traffic ever since the Canada Line began operations last year. Richmondites, don’t you find that the case? I was really thinking that if they put in a few street food stands here, it will be an instant success. Anyway, I digressed. 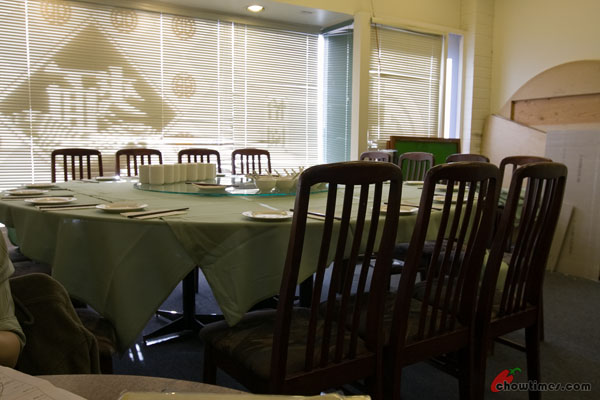 As luck would have it, we were again seated in that little room that was an extension of the restaurant. That room was a weird location because it is accessible only via a narrow corridor. I thought that it is quite a death trap in case, you know, touch wood, there is a fire.

The worst thing about being seated in this room was getting the service when you need it. You got to wait till a waitress walks in. Either that, you have to walk out to the main dining area to get what you want … which is what we did during the dinner.

See that table above? That must be one of the biggest round Chinese-style tables I had ever seen. I am not sure if there are any tables bigger than that. That table seats 15 people comfortably! Even at that size Suanne and I thought that it is almost impractical because even with the lazy Susan, one has to stand up to get the food. 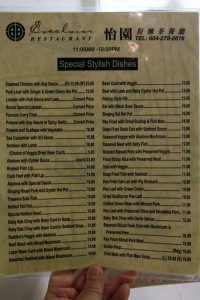 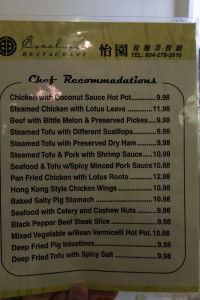 They have a very interesting menu which we like a lot. There are many dishes that are our favourite.

It took us a long time looking high and low in the menu for the Lamb Hotpot. We could not find it. So we asked the waitress about the award winning dish and for the longest time the first waitress did not know what we were talking about. She had to summon another more senior waitress because we were not giving up without having tried the lamb Hotpot.

How could they NOT serve an award winning dish? Other restaurants would give an arm and a leg to win a CRA award and they, they took it off their menu! They explained that they only serve the Lamb Hotpot in winter because according to the Cantonese, lamb is a “heaty” dish. LOL!

Our hopes were dashed. And now we had to wait for another 6 months to try it.

Anyway, the waitress was wonderful and recommended something nice … 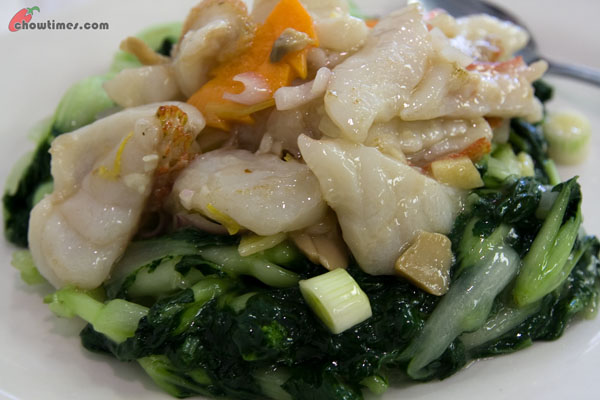 She was pretty good describing the special of the day. It is two dishes based on a single fish. It is not on the menu because they only do this if they have supply of the fish. They call it the … “Red Chicken Fish, Two Ways”.

A lot of tables got this dish. The 15 seater table next to ours ordered the same dish with a fish that weighted EIGHT pounds.

We did not have to order anything else for the two of us. One fish, prepared two ways is more than enough. The first way (above) was the Stir Fry Fish Ball (Chau Kau). This is served with baby bok choy. 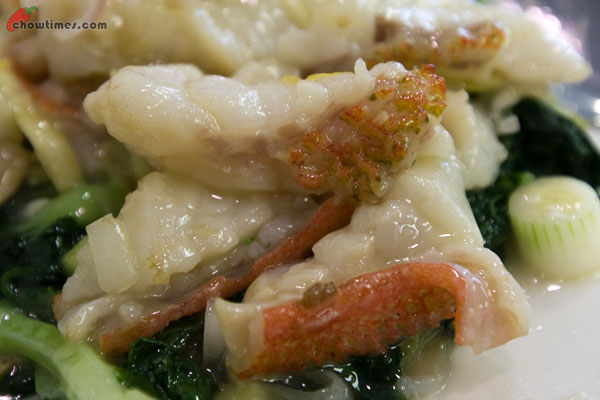 The fish is unbelievably firm, springy and smooth. It tasted almost like lobster. I don’t know what the fish is called in English and the waitress only said that it is “red fish” in Cantonese. The sauce complements the boneless meat very well. The sauce was ginger-y and green onion-y. 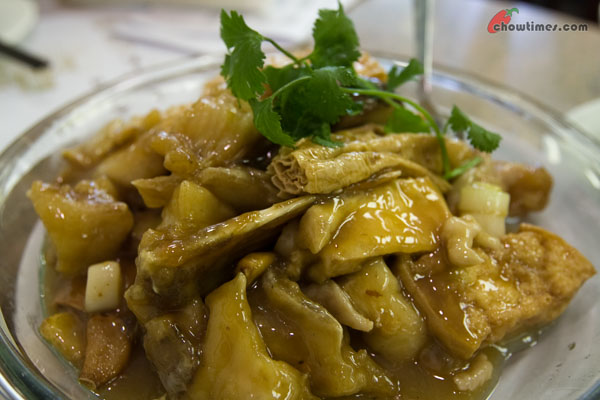 The second way is simply called the Braised Fish Head (in Cantonese). This is prepared vastly different from the first way. The fish head is first deep fried and then braised. It is served with tofu, bean curd, mushroom and whole garlic cloves. 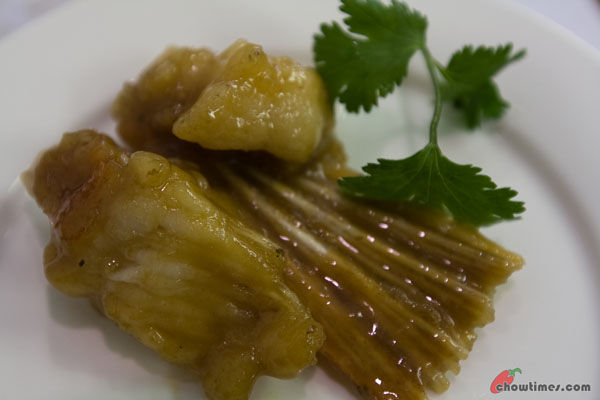 The fish meat here has bones, quite unlike the earlier dish. This is equally very good.

Our waitress told us that they can even use the fish head and steam it (for a lighter flavour) if we want but deep-fried/braised fish head contrasted the first way better.

It is just me, OK? I like this kind of “surprise me” dining. Only a good and experienced master-chef would be able to execute any dishes based on the latest and freshest ingredients he has. I think that Excelsior is one of the restaurants that has such a chef. 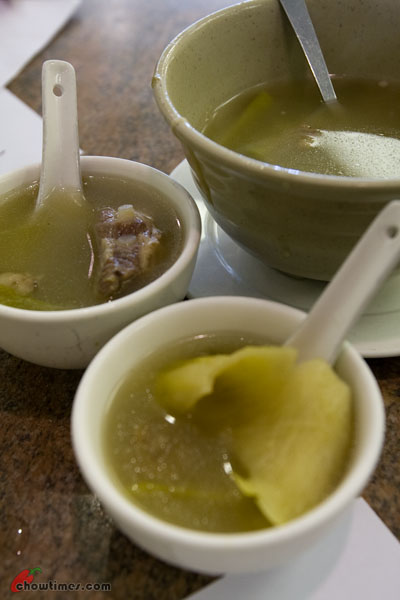 The meal came with free soup. It is pork and salted/pickled mustard. It was better than your average free soup. 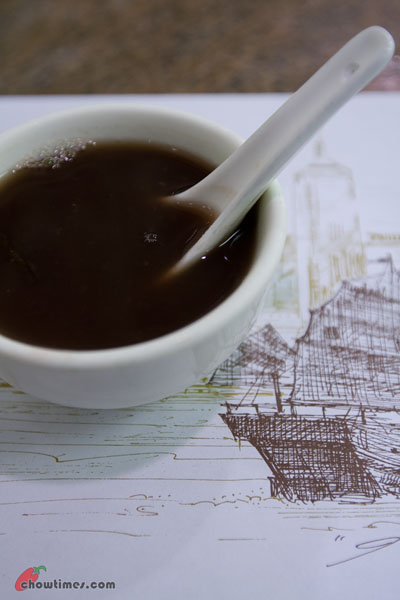 It also came with free red bean dessert soup as a dessert. Nothing fancy here. 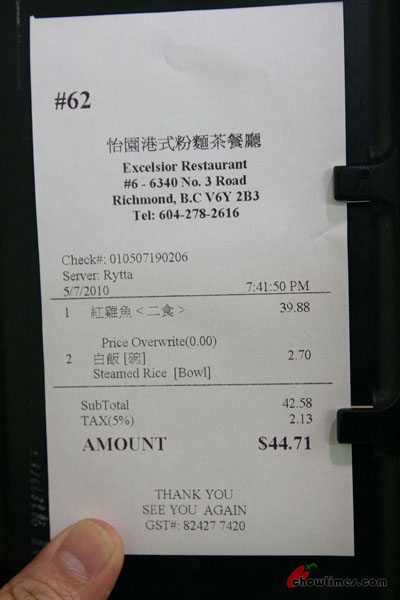 For the quality, I don’t feel that the forty bucks are awfully expensive. Although I must say it is on the high side. The downside is that we did not get to taste the award winning lamb hotpot – darn!