It was slightly after 2 PM when we finished the meal at McDonalds. We could have taken it easy for the day but that is not like us.

We are typical kiasu Asian tourists who would rather run ourselves to the ground going to as many places as we can rather than just laze around. Yeah … vacations to beach resorts is such a waste of time to us.

So, 2PM is a long way to 10PM when we will go back to the hotel to sleep. Until then there are lots of things to do. 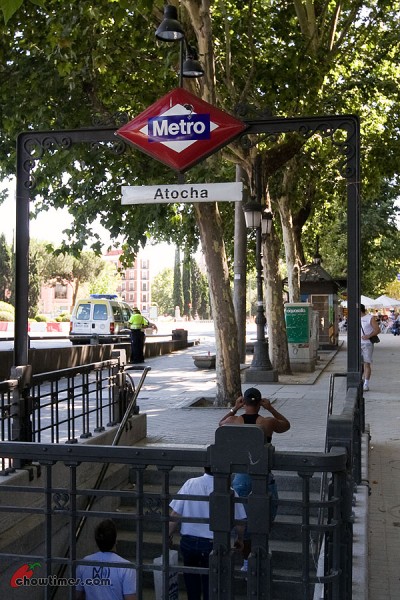 We hoped onto the Madrid Metro again. The Madrid Metro is very extensive and is one of the largest in the world. They run underground for the most part and is pretty clean and well maintained. We felt safe using the Metro and that is the important thing.

The Madrid Metro fares are simple. It is 1 euro for a one-zone fare. Most of our travelling was within the inner core city zone and so it was pretty much 1 euro each trip.

We headed back to the Atocha station which was where we arrive at the train station just a couple of hours earlier. 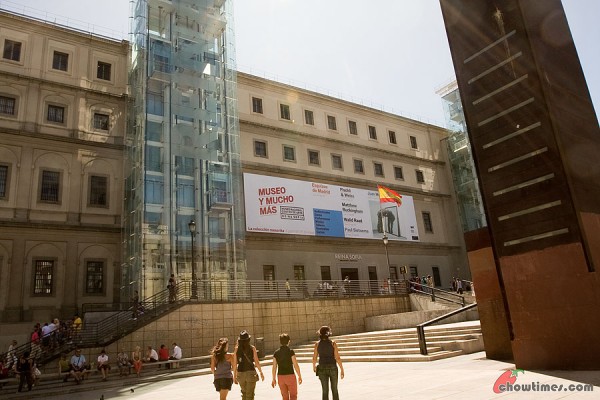 We first headed to the Museo Nacional Centro de Arte Reina Sofía. It is a long name but we just call it the … Reina Sofia Museum which is named after Queen Sofia. 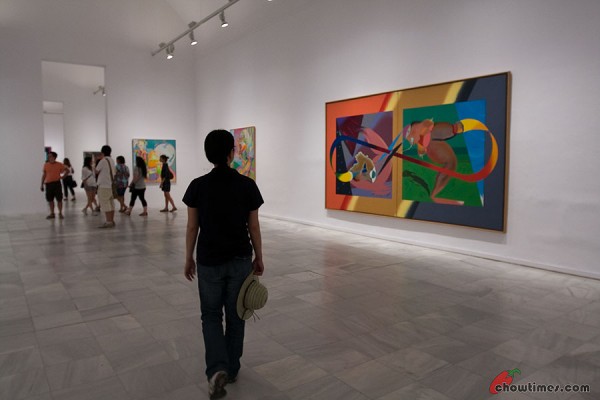 The Reina Sofia Museum is Spain’s national museum for modern art which exhibits all the great Spanish works of the 20th century.

The art works included a sizable collection of Pablo Picasso and Salvador Dali, two of the great masters of modern art.

I was getting a lot familiar with Pablo Picasso’s pieces in my visits to art museums in New York where the Getrude Stein is displayed. Moreover, we also visited the Picasso Museum while we were in Barcelona. 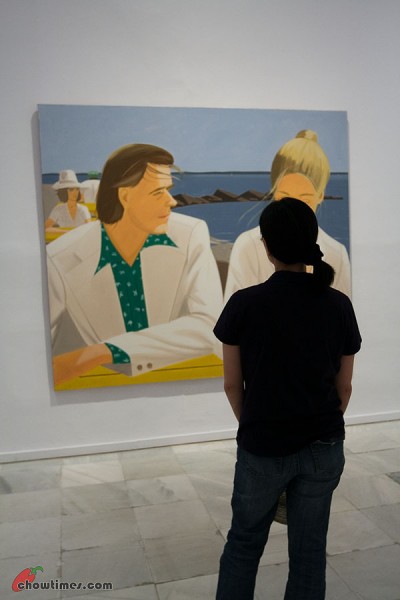 We did not spend a lot of time here even though this museum is large and would easily take us a whole day to go through most of the exhibits. 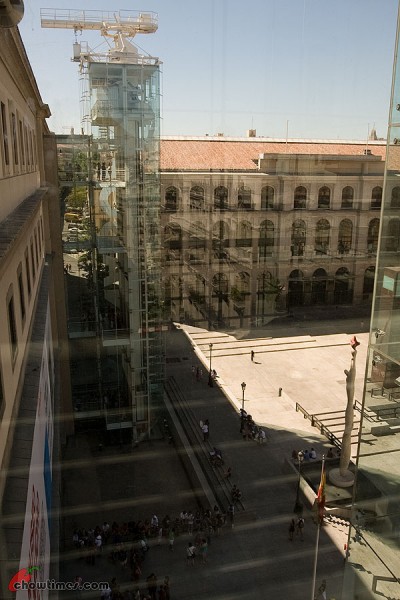 This museum is built just a few years ago on a building which used to be a hospital. It is spread over four floors.

There are a lot of young people hanging out in the plaza in front of the museum. 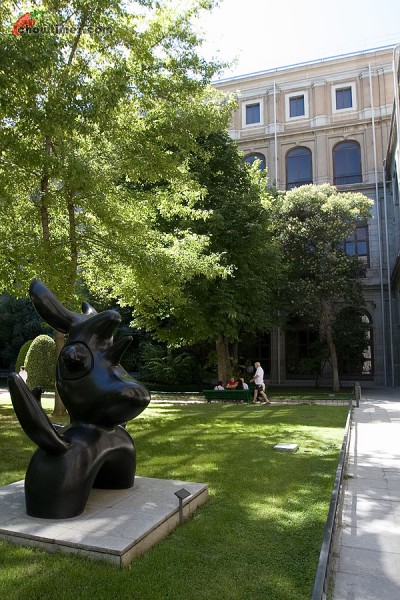 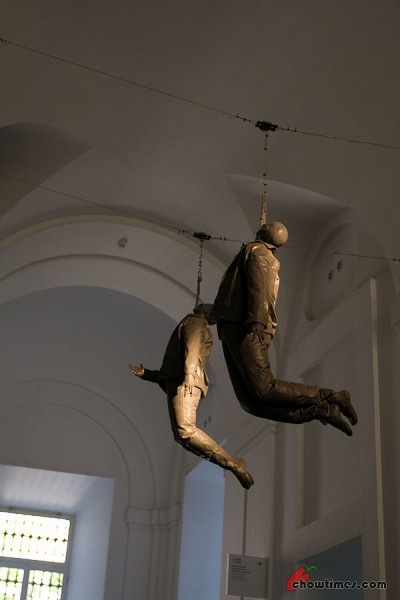 We spent only about 1.5 hours here. He he he … most of the time were spent at places where there were seats and was cooling. All the heat and the walking the past few days were catching up on us already. 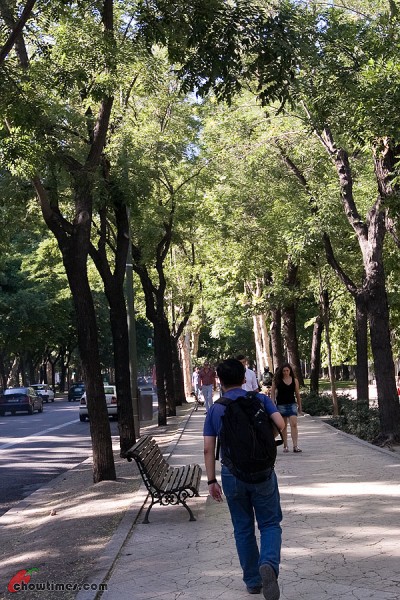 Besides the Reina Sofia, there are two other important museums located within walking distance one from another. This whole area is called the Golden Traingle of Arts.

We walked along the tree lined Paseo del Prado headed to the next museum. The Paseo del Prado is a main boulevard in Madrid and there are a few fountains located along the way. Yeah, we stopped at every fountain, big or small, and soak ourselves wet. It was THAT hot and energy sapping in Madrid. Thank god for all the trees here!

I remember reading somewhere that Madrid is the city that has the most trees per capita in the world. Looking at the number of mature trees, I can kind of believe that. 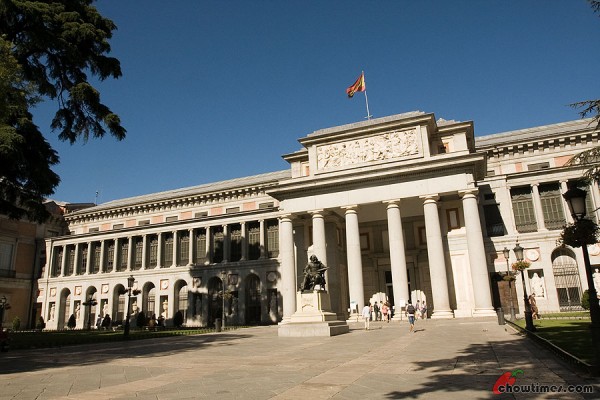 We stopped at the Museo del Prado next. This museum is one of the most important museum of art in the world with a notable collection of European arts. 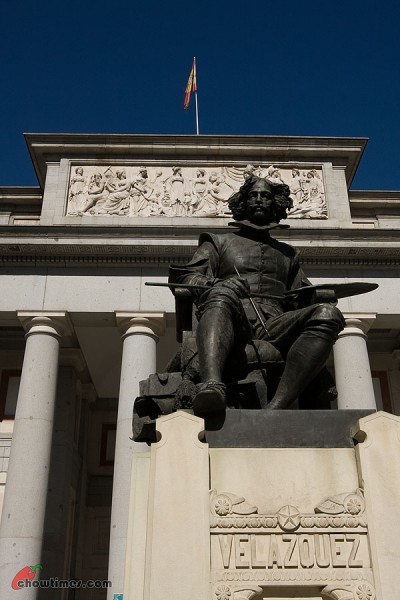 This museum has the biggest collection of the master artist of the Spanish Golden Age, Diego Velazquez. His bronze statue is displayed prominently in front of the El Prado.

We enjoyed the visit to this museum a lot more than the Sofia Reina. Of the works that I was most enthralled with was the Las Meninas by Velaquez. I had earlier seen the 58 renditions of this painting by Picasso and it is in this museum that I get to see the original Las Meninas.

No photography was allowed in this museum. Too bad because we had such a great time here and I wanted to show you some of the amazing works. 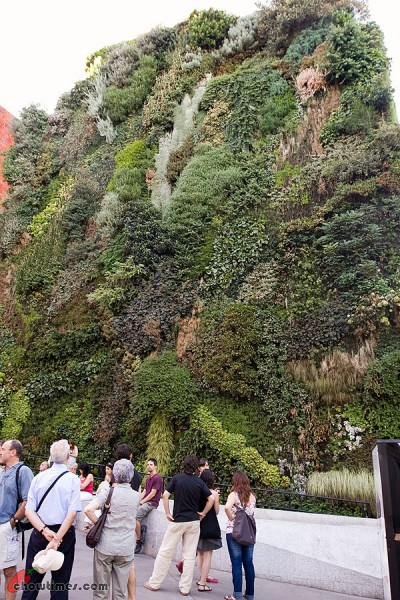 It was getting late and we decided to head back to the area around the hotel. Along Paseo del Prado we came across this amazing garden on the wall of a building. It is cooling around this area too because the entire wall is wet and moist. This is pretty cool. 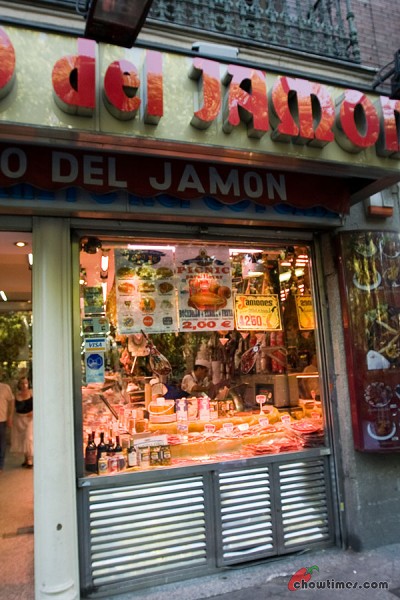 Hehehe … we also visited another “museum”. This had got to be the best “museum” of them all.

There are several Museo del Jamon (translated as Museum of Ham). They are located all over Madrid and if you like Spanish ham, this is the place to go to. They are really cheap too.

To us, going to the Museo del Jamon is like going to McDonalds in any US cities — but a lot better. They serve really decent food with really cheap prices. It is a full service restaurant although what they do best is Jamon … ham!

Although we usually get the ham sandwiches to go but this time we decided to just go in and rest our tired feet. Moreover, the air conditioning inside was at full blast — we can’t resist. 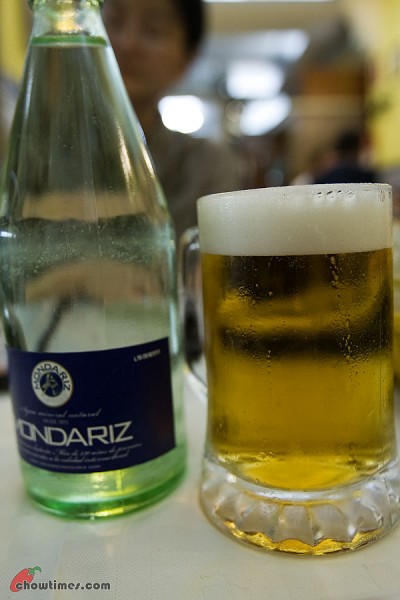 We drank like a fish that day. We had two big bottles of water which we carried along since morning and they were all gone. You know, planning to carry water save some money. We usually will stop at a supermarket to get a few bottles where it is the cheapest. At tourist spots, it is exorbitant. 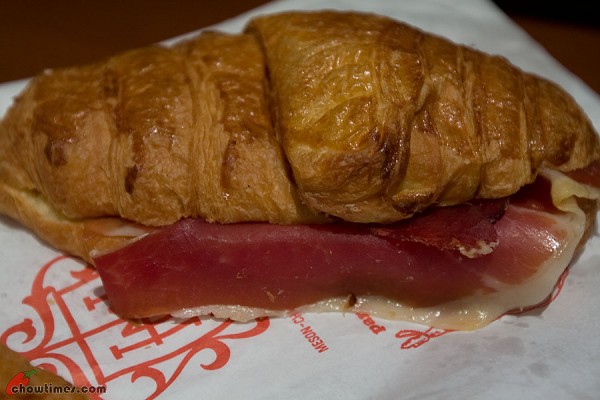 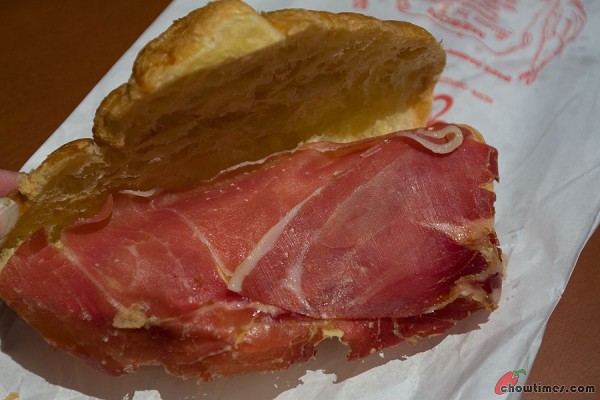 They are magnificent. I am not an expert in spotting if this is jamon iberico or jamon serrano but am sure this is the cheap versions. Nevertheless this is heavenly.

You know, if someone just makes these sandwiches in Vancouver and sell them at $3 Canadian, I bet ya that there will be a solid line right out the door and around the block. Yeah, I think people will plonk down even $10 for this.

At just a couple of euros, we ate a lot of these in Madrid. It was cheap, convenient and delicious. 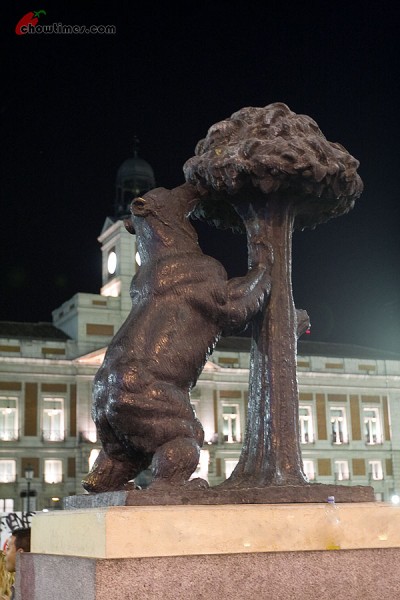 By the time we got back to the area around our hotel, it was already dark. Yet, this place is bustling with people that it’s unbelievable. It is busy like Times Square with people jostling for space and people peddling wares and all.

See the sculpture above? That is the symbol of Madrid … the bear and the strawberry tree which is located a short 3 minutes walk from our hotel in Puerta del Sol. This is the heart of the city of Madrid and indeed the heart of Spain.

Just a short distance away is the marker that Spain’s highway system radiates from (called Kilometer Zero). I couldn’t take a picture of that marker because everyone was walking all over that marker that I gave up. 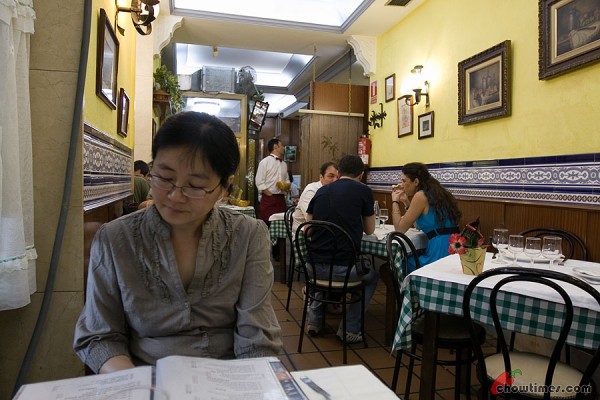 We explored the area around Puerta del Sol. There were a lot of restaurants with tables laid outside the restaurant. It seems like everyone in Madrid eats out. LOL! It is just unbelievable and quite unlike anything you will ever see in Vancouver for sure. I think it was also because it was a Saturday night.

Frankly, we were tempted to eat at the one Chinese restaurant because we were craving good old Chinese food no matter how crappy it is. But we forced ourselves to not go in. We were just that close eating there.

Instead we went to this restaurant called the El Duero which doesn’t matter to you. It was just one of dozens around. We chose this one because they had very delicious looking food laid out in the front.

Again we sat inside because people were smoking at the tables outside. 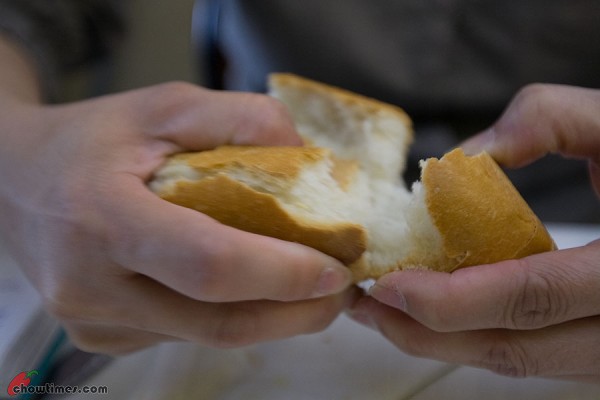 It was a bad choice of a restaurant. The waiter was very pushy and it was very off putting to us. I am sure he was doing it because we are obviously the dumb tourists who doesn’t know anything.

The food was terrible. The worse we had in Spain. The bread, while crusty, was very dry inside. So dry it was quite unedible. 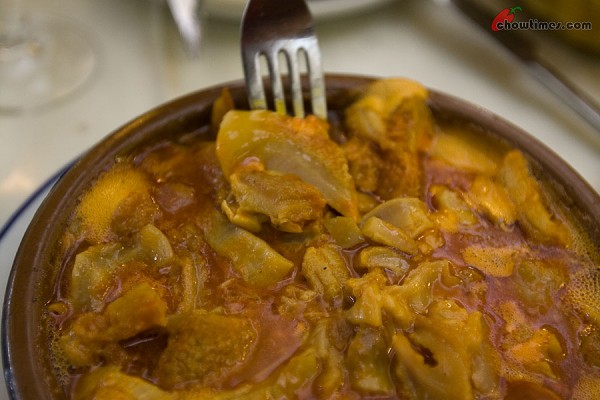 The Tripes Madrikan Style was 7.50 euros. It was not cheap considering how small it was. The dish as a whole was very sticky and was just not nice.

Anyway it was a random pick. We chose this because of the word “tripe” in it. 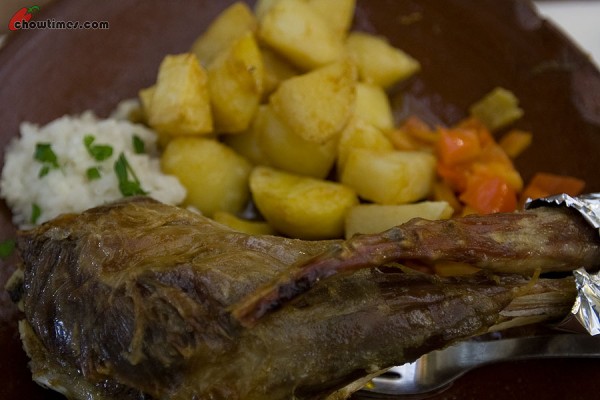 The Suckling Lamb Aranda Style sounded like a great dish, doesn’t it?

It was simply horrible. The meat was very tough and leathery and dry. It was inedible … just impossible to eat. Moreover it was 15 euros. 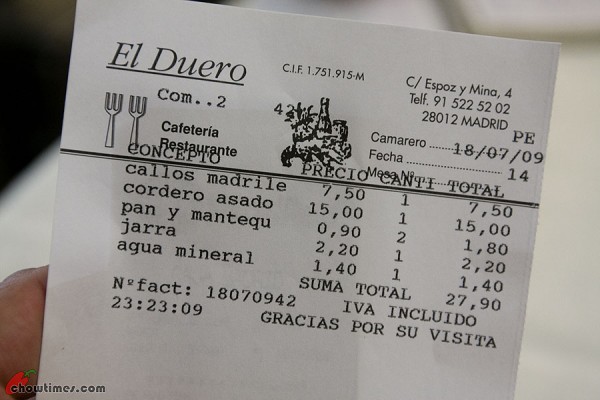 Yeah, it was the worse meal we had.

This was our first day in Madrid.