After five days in Washington DC, we said goodbye to US capital city. As we were heading out, we were stopped right at 15th and Constitution Ave. That is the intersection just right out of the White House. The police stopped traffic for 5 minutes in all directions and seeing the number of police officers around, we sort of knew a convoy is heading our way out of the White House. 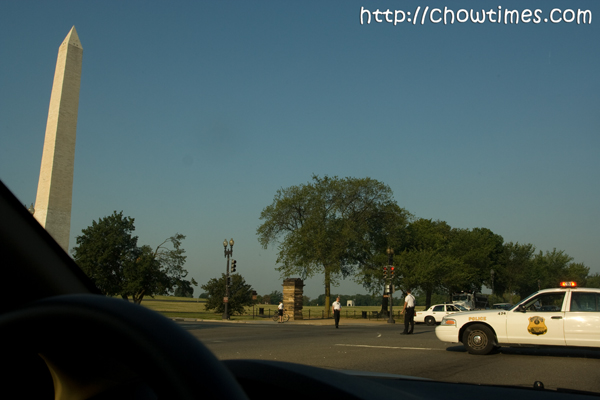 We did not mind because of our luck, we had the front porch view of the whole thing — our car was the first one stopped and had a great view. Oh boy, the policemen sure were twitchy. A car somehow rolled through on our right and every policemen had one hand on the gun holster and another hand held up commanding the car to halt. It freaked us out so much, we put down our cameras instantly! 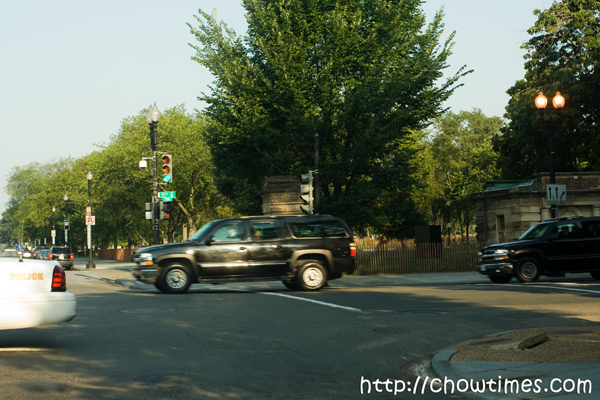 Then a stream of police motorbikes, black SUVs and an ambulance which followed at the back sped through the intersections. It was sort of exciting for us simpletons from Canada. It was so cool … very much like in a movie. We tried to pick out the VIP car but they all looked the same. I bet it was President Bush going out for a bicycle ride because one SUV had some bicycles on a rack. LOL!!

That was a great way to say goodbye to Washington DC.

This day we headed out to Gettysburg to visit the famous battlefield. We drove through the state of Maryland. 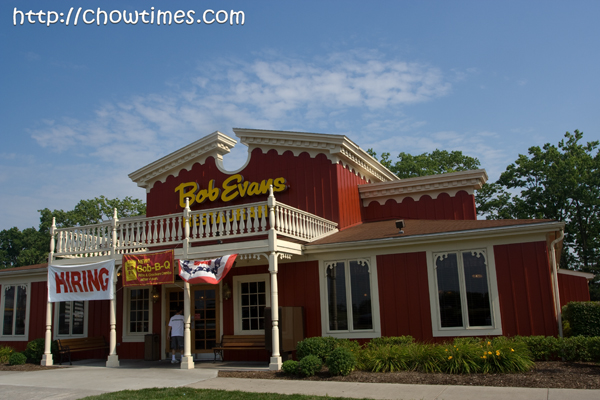 We noticed that in this part of the United States, there was a restaurant sign all along the Interstate of Bob Evans. We had never seen this on the North West US before. We reckon that Bob Evans is like the equivalent of Shari’s in the Washington State. So, somewhere along the way to Gettysburg we stopped by a Bob Evans for breakfast. 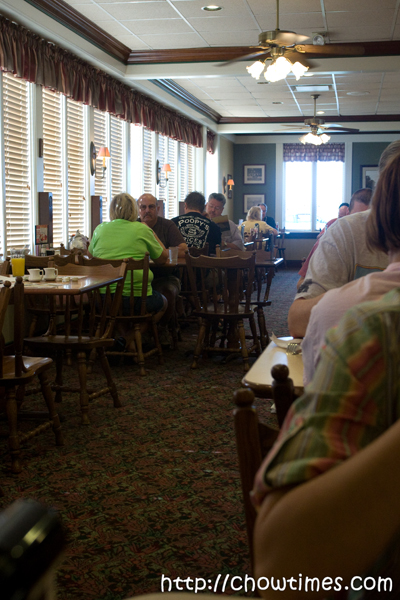 Not knowing anything at all about Bob Evans, we went in and was quite delighted when their slogan says “Breakfast is served all day” and “The Home of Homestyle”. All the Bob Evans restaurants looked the same with the bright red facade which was really inviting for breakfast.

From the exterior, this looks like a small to mid sized restaurant but it was quite large and had several sections to it. The place were teeming with customers that morning. That sure gave us the assurance, we had picked a right restaurant. This is a very family oriented place too because we do see quite a number of customers with “three generation families” eating here.

Service was kind of awful, I must say. First I did not like the fact that they put us next to the entrance to the washrooms when we could see a number of tables that they could place us. And also, I swear the waitress looked at us kind of funny and spoke to us with curt mono-syllable “sentences”. Oh well, we refuse to let that ruin a great day for us and ignored that. 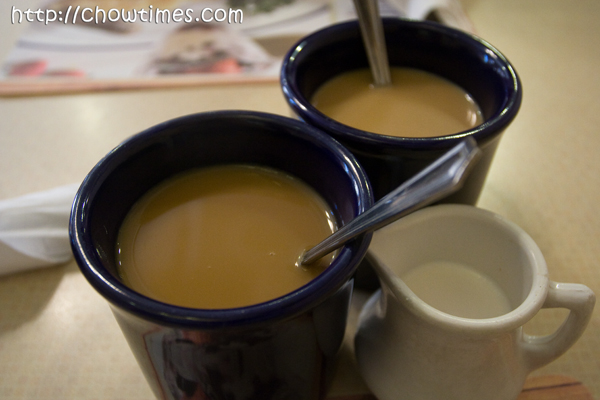 We had, as usual, coffee … with cream and sugar. BTW, I don’t find black coffee appealing and simply must have sugar in it. I guess this habit came from the days in Malaysia where in some extreme end, people actually drink coffee with 1/3 glass of sugar and condensed milk! 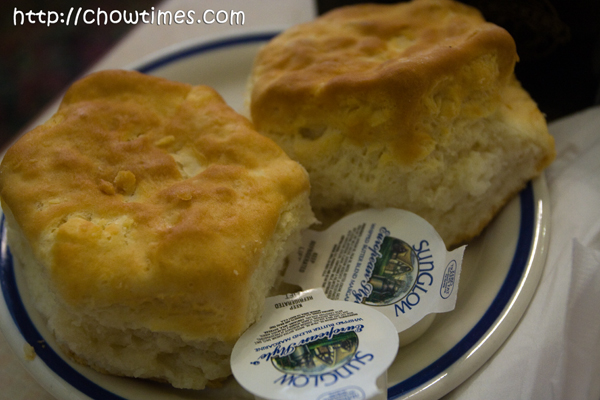 They gave us warm biscuits. I guess everyone gets one as we did not order this. Suanne digs this kind of biscuits — I don’t because I consider biscuits dry and breakfast must never be dry! Suanne swears that their biscuits were great. I let her have mine. 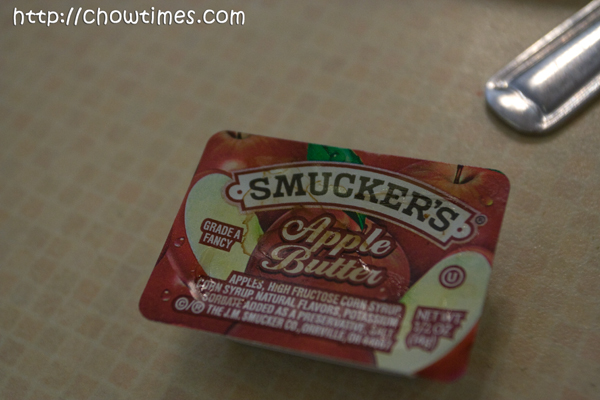 Suanne had the biscuits with something called the Apple Butter. We had never seen this before and I don’t think they sell this in Canada, do they? Suanne loves this. Have any of you ever come across this Apple Butter? We would love to get this for breakfast at home. 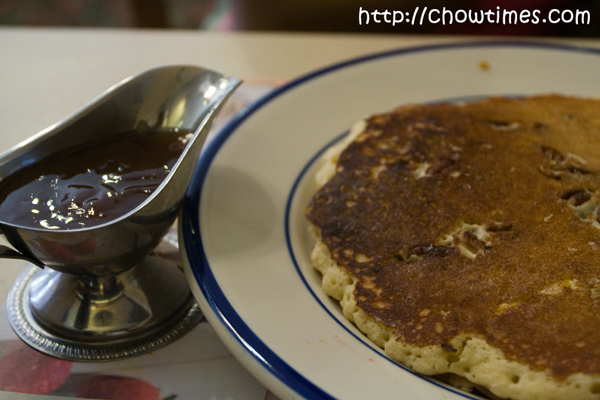 Suanne ordered the Stacked and Stuffed Hotcakes. There are three choices and Suanne selected the one with the longest name — the caramel Banana Pecan Cream Stacked and Stuff Hotcakes. Suanne did not quite like this and said that it is very “lau” (that’s in Cantonese but am not sure how to describe this in English). She left this half-finished. 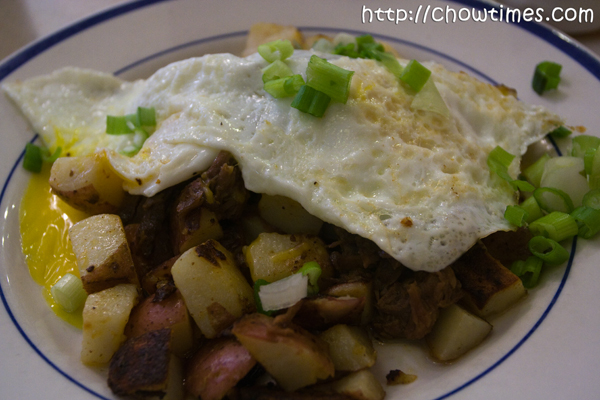 Me, I had the Pot Roast Hash. This is a million times better than Suanne’s. Hah! For the first time in the past few days, my choice beats hers. So, naturally she dug into my plate.

I normally had lots of ketchup with food like this but this is so good I actually did not put in ketchup at all. We normally had either sausage and bacon during breakfast — it is good to have moist pot roast for a change. And the scallions … now, why don’t every breakfast have scallions on eggs … they are great. 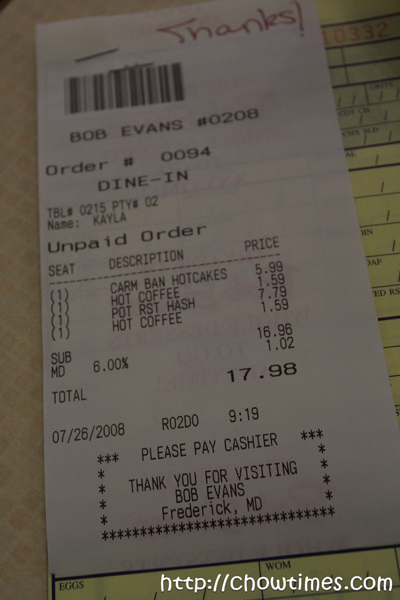 The price was very good … $18. We enjoyed having checked out Bob Evans (except that we had a waitress who we think got off the wrong side of the bed that morning). 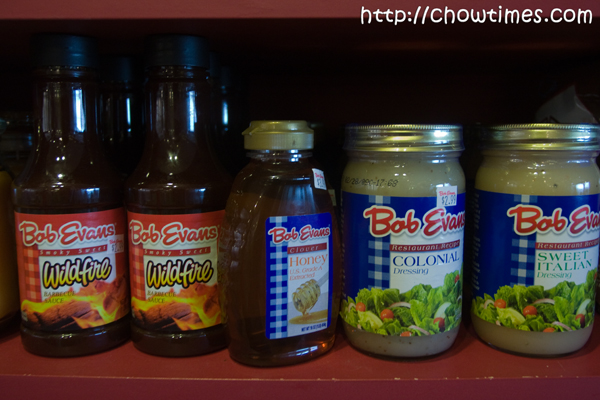 Oh … in Bob Evans they do sell their stuff like honey, BBQ sauce, dressings, etc. We were tempted to buy some to try but we knew we won’t be able to lug this along for the next 1.5 weeks.