We raved about our find at Jumbo Sushi just a couple of weeks ago. It was not because Jumbo Sushi is good or anything like that. It was because they serve HUGE JUMBO sized sushi for cheap. It was just perfect for my boys who can devour sushis like there is no tomorrow.

Jumbo Sushi WAS the boys favourite for just two weeks. The family favourite is now the Banzai Sushi House (thanks to the recommendation of Vanessa, again).

Banzai Sushi is located on Westminster Highway in the strip mall across from the Richmond Public Market. It is actually just next door to Tsim Chai Noodles. For some reason, I had never taken notice of Banzai Sushi before … strange.

The picture above is somewhat misleading. We were the first customer as soon as they open at 11AM. Shortly after, it was all packed — certainly a very popular place and to think that I thought there were no sushi places of note in Richmond.

Nanzaro ordered the Tuna and Salmon Sashimi. This is just over $9.25. 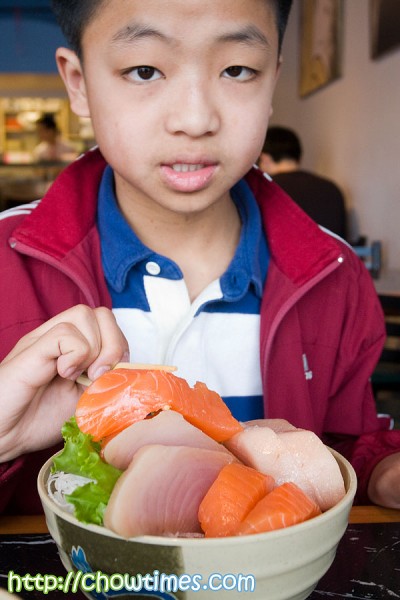 But they are HUGE … everyone of them. It was mind boggling seeing sashimi pieces these big. Nanzaro was absolutely delighted with his bowl and tried his best not to smirk at his older brother’s selection. It was not often that Nanzaro beats Arkensen in anything.

Just look at the size of it one more time. It is just this thing alone that I am sure we will be making repeat trips to Banzai Sushi. Size DOES matter. 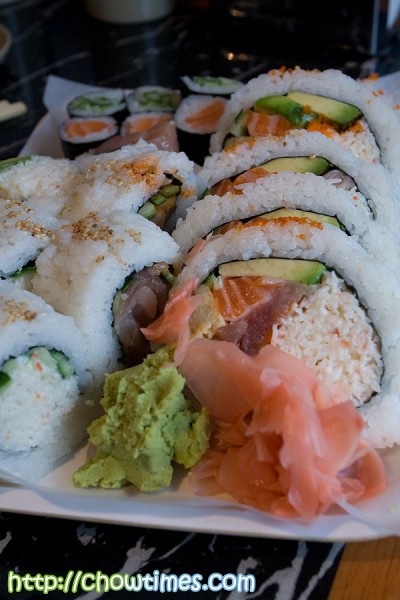 Arkensen selected from the Maki Combo B. This is $9 and consists of five types of half rolls.

It was pretty decent … it has California Roll and Tuna Roll.

The kicker was what they call the House Roll. We had never seen a bigger roll than this. It is like a California, Tuna, Salmon, Tamago (Egg) and Avocado roll all rolled into one.

It is so big that you can not even pick it up with your fingers without it falling apart, let alone try to pick it up with a pair of chopsticks. Needless to say, there is no way anyone can shove into the mouth in one go. 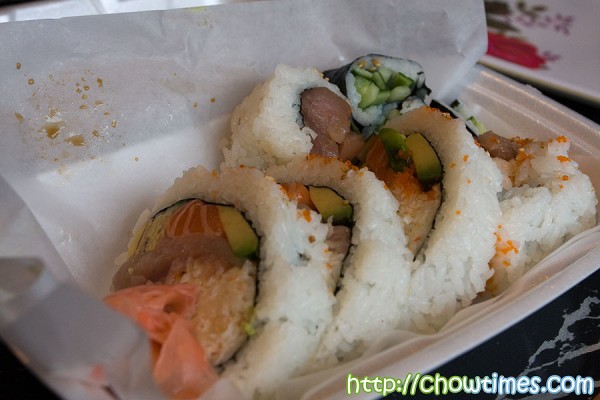 Arkensen barely finished half of it and had the rest to go. Look at the diameter of the maki … it’s almost the entire width of the container.

The Chicken Teriyaki Don was $7. That was Suanne’s selection. After the superlative sizes of the boys selection, this is more down to earth. I don’t think Suanne will ever get used to eating anything raw.

If I recall correctly, what I had was the Dragon Roll ($8) and Futomaki ($4). I wanted to try something beyond the normal BC Roll, or California Roll.

The Dragon Roll was pretty good. This is something that Suanne took a couple of pieces of because it had elements of cooked food. 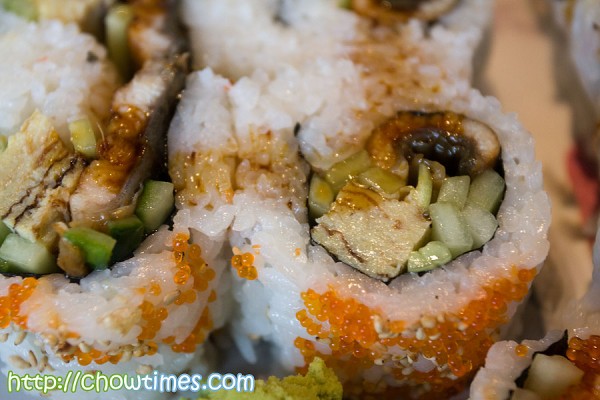 The Futomaki was a bit more bland compared to the Dragon Roll. The sweet taste of the tamago dominates the flavour of this roll. 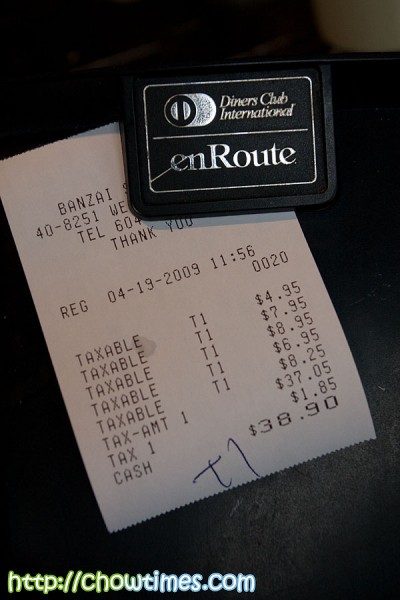 The bill came up to $39 before tips. There was a lot of food. We enjoyed it so much and will come back again. I already know what the boys will order next time … the sashimis.

Banzai Sushi House is branch of Samurai Sushi on Cambie in Vancouver. We had never been to Samurai Sushi but reckon they serve the same gigantic portions.