I was so honored to have been invited to a dinner with some of the most revered foodies in Vancouver last week. When FMED asked if I would like to join in a dinner with such distinguished names in the foodie world, I was kind of uncertain. You see, these guys and gals are heads and shoulders above the likes of me — a wannabe foodie … a food blogger. These guys knows food and speak authoritatively. These guys are judges for restaurant awards. Their opinions are revered and trusted. They are what I want to be when (if?) I grow up. LOL!

Since I did not have their permissions to mention their names and pseudonyms, the diners will remain anonymous. Let’s just say there were a group of six boys and girl. 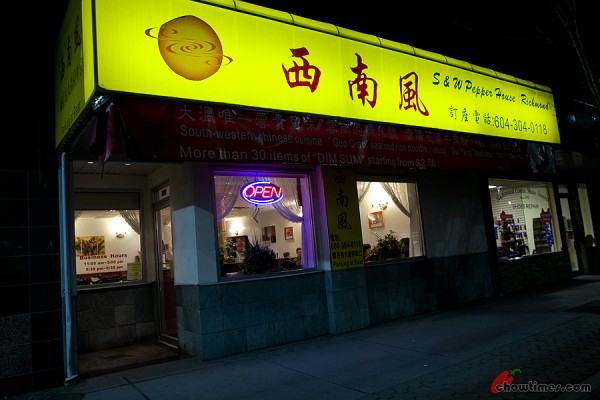 Oh boy, I was so embarrassed that I arrived late. Not good to have these people wait. They had almost finished the ordering by the time I arrived. 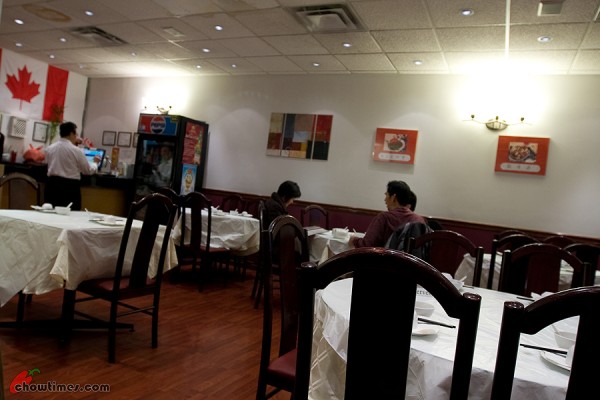 I had been to both S&W Pepper House in Richmond and Burnaby before. As a matter of fact, I remembered that the visit to the Burnaby’s S&W was one of our earliest post — like 2/3 weeks after chowtimes got started. Reading back that 4 year old post brings back memories to those days when blogging is a simple affair. I still remember that meal where we had the “Guo Qiao” (Crossing the Bridge) Rice Noodle in Special Soup which has a story behind the name of the dish.

First thing that came across my mind was so less classy this S&W Pepper House is today compared to when I first ate here almost 3 years ago.

This place used to look brighter, has better paintings on the wall and it does seem more busier. Maybe it was because this time we had the dinner in mid week. Oh well … not that it matters really but I just happen to notice the stark contrast.

The guys and gals are cooler.

They don’t take pictures of the food before they eat it. They don’t even have to write down their observations. All they needed was the chopsticks.

But they understood. LOL! They respectfully allowed me to shoot pictures before they dove into the food. I know it is not cool but I got a job to do.

FMED stole the picture above. I was not aware of it but I thought I share one of the rare shots of me here. I think this is the ONLY picture of me “at work”.

I was kind of surprised how many appetizers were ordered.

The above is called Fried Peanuts with Cilantro and Chili. This is just $5 and was marvelous. I had never ordered this before. Almost everyone just ate it straight. For me, I just had to have it with rice because the spiciness and flavour is too overpowering for me. 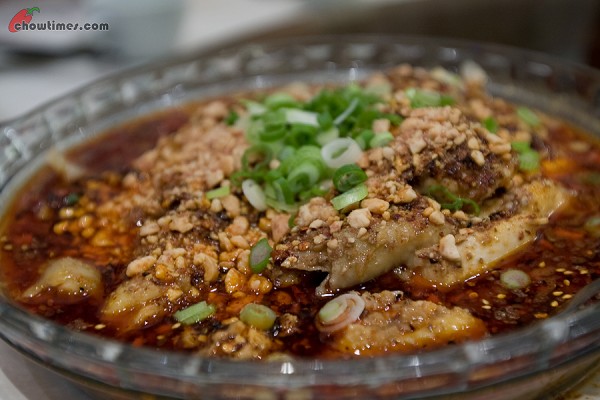 The above is called the House Special Chicken. While this is considered an appetizer, the large serving belies the categorization. There is half a bird here and costs $11.

Again with this, I just had to have this with rice. 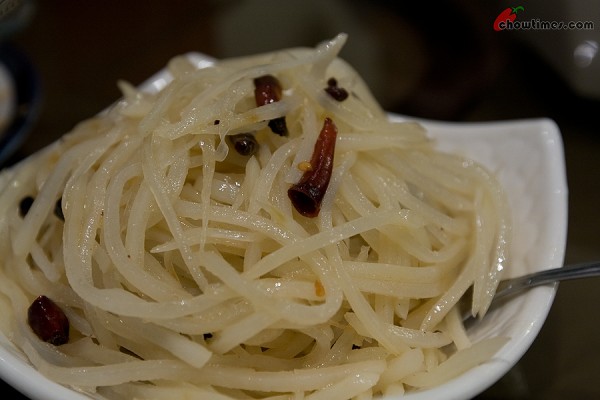 I see the dish above very often when I go for lunch at the Crystal Mall. I never knew what it was but it certainly was popular that a lot of people ordered it. I assumed that this is a very Sichuan dish.

Guess what it is made of.

This is called Shredded Potato with Dried Chili ($5). I was kind of intrigued because as far as I know potatoes are not native to China. Potatoes originated from South America and I was curious how this ended up as a traditional dish in China.

I thought I was cool right? I just had to mention this … and guess what the response was from the experts. 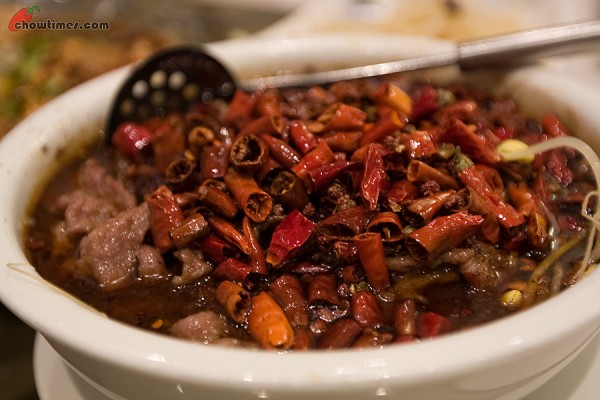 This next one is called the Boiled Beef with Assorted Vegetable ($13). You see how reddish all Sichuan dishes are. The cuisine is dominated by the use of red chilli peppers and the tongue numbing Sichuan peppercorn.

The experts pointed to me that if potatoes did not originate from China, I would be more surprised that Chilli is also not native to China. Huh! I learn new things everyday. I simply love this kind of info. These days I find myself getting more into learning about the food as much as tasting it.

I am amazed at how chili became a core ingredient of two major Chinese cuisines (Hunan and Sichuan). Christopher Columbus found South America about 500 years ago. To think that this made its way to central China (not even coastal China) just boggles my mind. I want to find out how chilli was introduced to China. Anyone knows?

I love this type of dishes. It is lovely pouring some of the soup/gravy into a bowl of rice and strategically place a few Sichuan peppercorns so I could get like 2-3 of it with each mouthful.

The Chinese Bacon with Garlic Sprout is $13. I think this is also called “Twice Cooked Pork” when translated from Chinese.

I personally are not all crazy over this. It is not the fatty layer that turns me off because I love fatty pork meat. It’s the texture and that it tastes salty too.

He he he … the Canadian bacon is more superior. 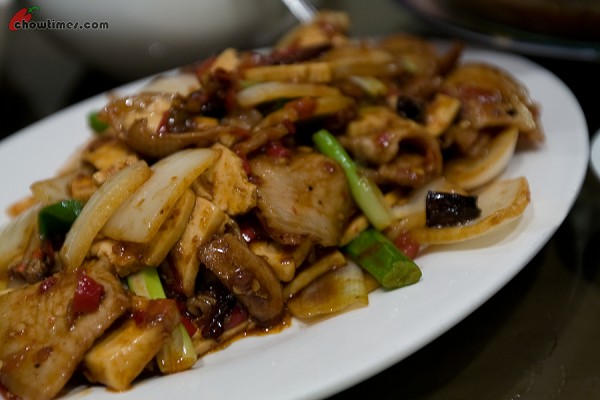 Next up is the House Special Tofu with Pork and Bean Sauce ($10).

This is OK. Quite good and is a sweetish addition to the other spicy hot dishes. 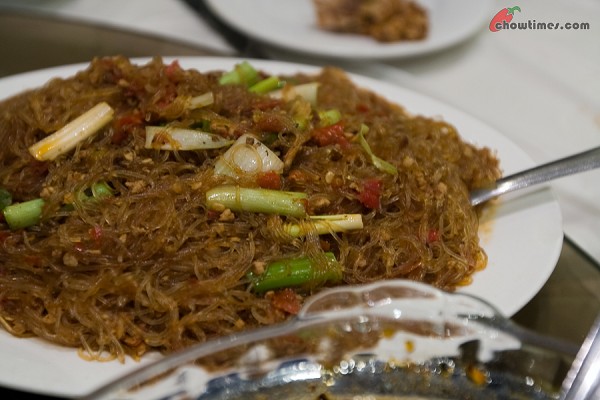 Oh … you will like the name of this vermicelli dish. This is called “ants climbing a tree”. I wonder what is the story behind this dish.

I could not believe how many pitchers of iced water that the table consumed. I would have thought that these foodie experts would have been able to take Sichuan spicy food better.

Hmmm … but then you reckon these pro foodies are doing this to protect their taste buds. I mean, their taste buds is like their tool of the trade sort of things, right? Unlike them, my taste buds which had long been destroyed and numbed by decades of enjoying spicy food.

Sorry guys. I hope you all don’t take offense to my clumsy attempt at humour. But really … I am so honored to have been considered worthy enough to be invited to the inner sanctum of this group of distinguished foodies. 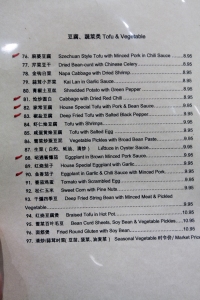 The Place on Granville, Vancouver South