I had put this post on the back burner for a long time already. I still remember the very day that we went to Zen Fine Chinese Cuisine. It was the day of the Mens Hockey semifinals. We were half expecting that this restaurant will be empty but it was not quite.

Zen had a storied past. Headed by Sam Lau today, Zen was the one restaurant which introduced the Chinese fine dining / tasting menu concept to Vancouver. This concept is a departure from the mainstream large-plate format of traditional Chinese restaurant. I had an insight of Sam’s culinary career from someone close to him and was quite impressed with his resume. I will not say who he/she was at this time because I want to write another separate post on this branch of Chinese cuisine.

Zen started in 2003. From the early years, Zen was struggling to introduce the new concept to a largely traditional customer base. Things changed dramatically overnight in 2005 when Jennifer 8 Lee of the NYT went to Zen to conduct research for her book The Fortune Cookie Chronicles. In her acclaimed book, Jennifer 8 Lee included these powerful words that made Zen an overnight sensation worldwide. She said that Zen is:

… the greatest Chinese restaurant in the world outside of China.

It was just a few words within a book in Jennifer 8 Lee reviewed of Chinese restaurants around the world. Those words gave Sam and Zen a second wind. Phones were ringing off the hook. We know because we were one of those who were trying to get a reservation when the news broke (here is our review of the old Zen in March 2008).

Unfortunately that did not last. Zen did close a few months later in September 2008. The official word has it that Zen closed then because Sam did not want to renew the lease of that location on Alexandra Road.

I think Vancouver was just not ready to accept this concept of small plate tasting menu. 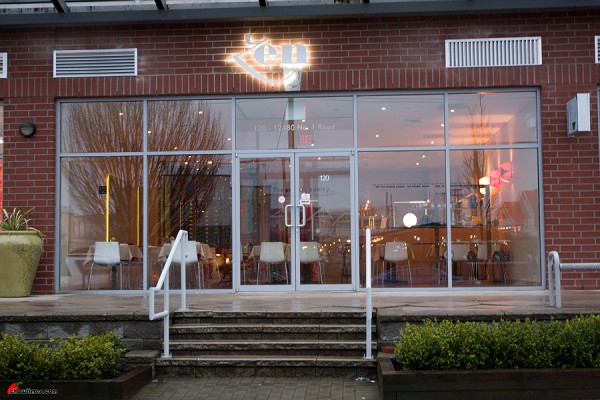 And still carrying the very words that Jennifer 8 Lee said “the greatest Chinese restaurant in the world outside China”. Except that the words “outside China” was dropped off.

Zen is now located on the southern most reaches of No 1 Road on Richmond. I like that location. This is just perfect for a walk along the Steveston waterfront boardwalk before or after a dinner there.

The decor is minimalistic and simple with clean lines. It is uncluttered as if to draw the focus of the customer to the food and nothing else. This is the type of ambiance that sort of make you slow down, even talk softer. You know how exuberant Chinese restaurants could get oft times.

The restaurant is spacious and seats about 35 people or maybe slightly more.

Someone commented on chowtimes that she saw cheap plastic chairs in Zen just prior to the opening. Well, it was not cheap the way I imagined it to be. It was still plastic but really, I would not count them as cheap. At least it is cushioned. 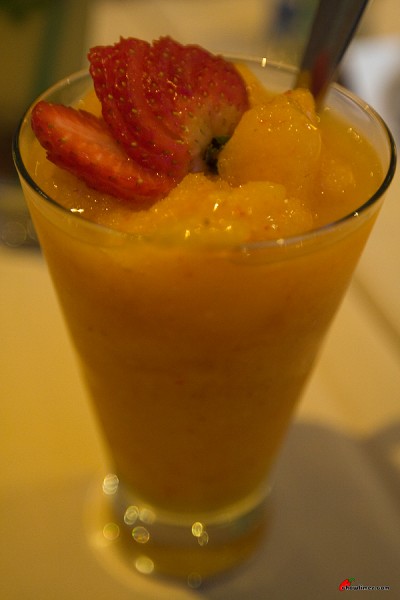 Service was excellent. That is understandable since we were there at 5PM and there were no one else in the restaurant at that hour. From the outset we can see that our server is very experienced. This is certainly more better than when we last dined in Zen.

The server came across as very confident. So instead of choosing drinks from the menu, we asked for his recommendation and that it is non-alcoholic. With just two questions, he said he will make something special for us. One of the questions was strange. He asked if we were hungry. We also told him we wanted something “light and refreshing”.

I was impressed with what Floyd came up with. On the left is a mix of crushed grapes, mint with white cranberry juice and soda. It tasted very minty and reminds me of Mojitos. What I like a lot is the load of shredded mint in it and also the grapes.

On the right is what Floyd called the strawberry belini. It is a mix of peach, passion fruit, mango, soda and syrup. This is fruity and another excellent drink that Suanne and I both enjoyed a lot.

The above is the menu. Click on them to see them in full size.

The first four menus are simply called Menu A through Menu D. Their prices ranges from $33 to $160 per person. There is also a Special Tasting Menu (not shown above) which is the cheapest at $25. Floyd said that this menu is created for the budget minded customer.

Although Zen stated in the tasting menu that the participation of everyone on the table is mandatory (i.e. you cannot mix and match Menu A and Menu B for instance), they allowed us to do that simply because we were the only one there so early. This is a common practice in tasting menus because of timing issues.

The last two menu above is their a la carte selection which has 13 items. Some of the items require advance notice. 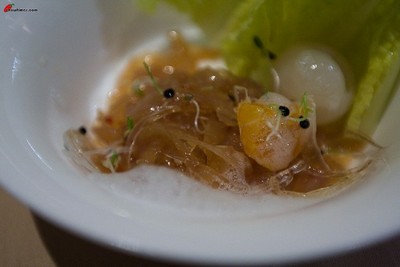 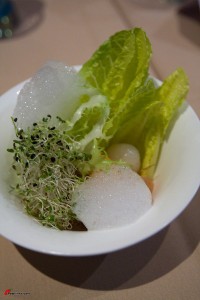 The appetizer is Jelly fish and Baby Greens with Foam Kumquat and Lychee. The jelly is crunchy with a distinct sesame seed flavour and is fresh and refreshing. It was a small bowl.

Taste-wise, it is really a good starter to the meal. Makes you want for more. 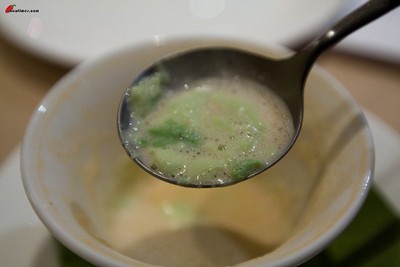 The appetizer is followed by “soup”. This is a deceptively simple bowl called Foamy Seafood Cappucino.

It was excellent … savoury. We can’t really pinpoint what exactly it is. When we asked Floyd, he mentioned that it is made with jelly fish, lobstser, crab meat.

In the soup is some jello-like green stuff. That is the lobster tomalley. Tomalley is the liver and pancreas of the lobster. It looks like a green paste inside the abdominal cavity of a cooked lobster. It is considered a delicacy and many people consider it the best part of a lobster. It can be eaten scooped from the cooked lobster or can be used to flavor sauces.

Nice … but again we wished that it is a bigger bowl.

First appetizer, then the soup. Next is called the Tofu & Fish.

It looked interesting but when we bite into this, it suddenly appeared to us that this is a very interesting take on the common fish paste in tofu puff … very much like the Malaysian Yong Tow Foo.

The tofu puff is deep fried to a crisp making its texture like cookies. Instead of having the fish paste enveloped by the tofu puff, on it is fish paste, chili and garlic. And topping this is garnishing of frisee (a bitter green) and thinly sliced chili.

I love the execution here. It is based on a very simple dish but made into an exquisite package. I was particularly impressed how the chili is so thinly sliced (picture right) with only the skin — really tiny but packs a punch.

The final item in this $25 Tasting Menu is the Steamed Spareribs with Black Bean on Rice.

Zen uses the best of ingredients. So for this, Zen uses Sloping Hill pork spareribs and served this in a wooden container. The wooden container was something else … it gives the rice a woody scent to the steamy rice.

I love this … a lot. I like the subtleness of the flavour in the rice particularly the scent. However, Suanne thinks the rice is bland and need more of the black bean sauce.

That’s it for the $25 Tasting Menu — four courses. Personally, I think this is a great value. The food appears simple for the most part but if you take the time to savour each bite, I think you will find the subtle difference in them and the close attention to detail to each ingredient.

We started off with Pan Seared Fresh Foie Gras with Berry Compote, Himalayan Salt, Salad, Lychee, Kumquat and Orange with Citrus Foam. What a package … a busy package with a good balance of flavour and texture.

The hero of this starter (foie gras) however is very … small even though it was creamy and balance well with the salt and compote. The Himalayan salt is from Pakistan and recently came into prominence the past few years. 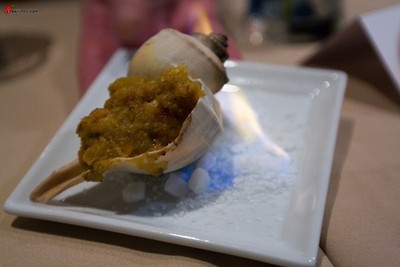 We had Stuffed Whelk with Curried Seafood so many times already (both in Zen and Hakkasan). It is almost like a Sam Lau’s signature dish or something.

I am not sure if you could see that the picture on the left with the blue flame. Oh yeah, they presented the whelk in flame and then replate it on another plate for us.

This one no longer has that element of surprise to us because we had it several times already.

Next up is the Double Boil Chicken Soup. We were informed that they uses Polderside chicken for this.

Polderside Chicken is like the Rolls Royce of chicken but frankly, to Suanne and I, we can’t tell the difference.

The soup was good … clear and deep in flavour. What we especially like is that it is without the oiliness usually found in chicken soup.

Actually the soup mentioned in Menu is Whole Young Coconut Soup but it has to be ordered in advanced. So they substituted this soup for that.

The same Steamed Spareribs with Black Bean on Rice is served with Menu C.

Like I earlier mentioned … I love it … Suanne thinks it is bland.

This had got to me my favourite. The Satay Lobster Stone Po.

They serve live lobster from the tank at the back of the restaurant. 1.5lb … wok fried … cracked.

No complains. Serving was good because it was meant for one person. 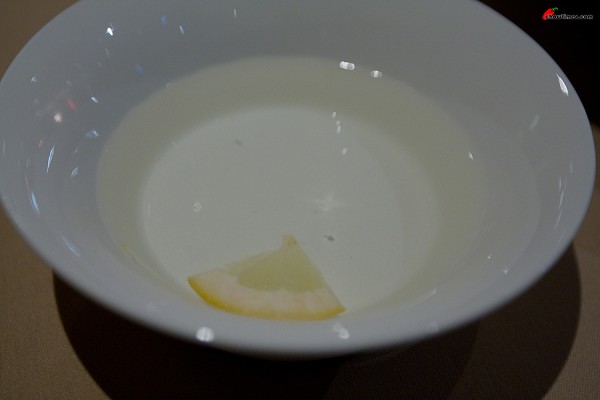 They also served us lemon water together with the lobster. I chose not to drink this because it looked plain and it has only a tiny thin slice of lemon. Anyway, I am not used to drinking this. I find that all high end restaurants serve this with seafood (crab, lobster, prawns) … not just in the local Chinese restaurants but also in an El Bulli Michelin three star restaurant in Seville. *shrug* 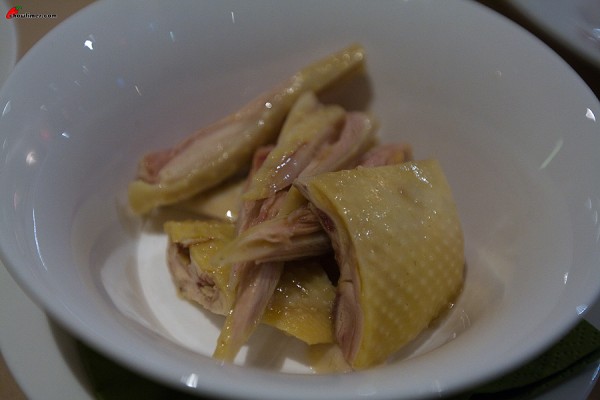 All good things must come to an end. The final dish is the Home Specialty Shredded Chicken.

Again, this is Polderside chicken. Again, Suanne and I cannot tell the difference between this chicken with the normal chicken.

The night ended with what is called the Home Special Sweet.

Did we enjoy this? Yes we did for the most part.

Yeah, the hand written bill does not exude class. There are teething problems since they had just reopened.

The $75 Menu C is admittedly pricey. I think I can read all of your minds. For $75, you could have a big feast in a traditional, even upscale, Chinese restaurant and you can be assured that you will be satisfied. That is perhaps the reason why Zen will need to continue to work on getting people to accept that what we call “Contemporary Chinese Cuisine” with small plates. It will be an uphill battle.