One thing that you will not fail to notice when in Chicago, particularly when you are along the touristy areas like The Loop and The Magnificent Mile is that you will occasionally find people walking around in a brown paper bag. 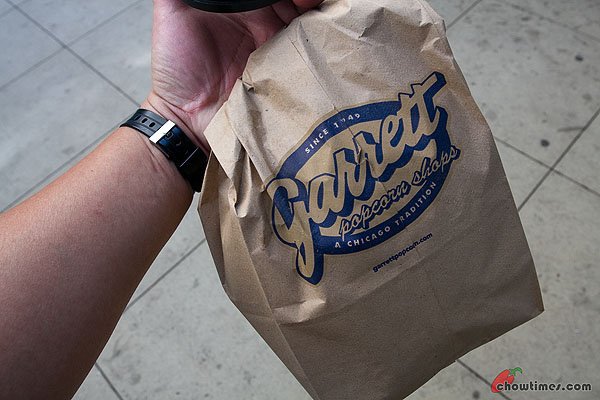 I was in Atlanta for a meeting prior coming to Chicago. I was asking one of my colleagues for restaurant and food recommendations. Camille instantly exclaimed “Garrett! Garrett! Oh my God! Oh my God! You have to try it”. For a moment I thought Garrett was a restaurant. It seems like Garrett is a very popular popcorn in Chicago. I was kind of deflated when she said Garrett is a popcorn brand. I am not a fan of popcorns and for the life of me, I can’t imagine how good popcorn could get.

But when I was in Chicago I saw quite a number of people walking around with the brown paper bag from Garrett. So, I decided to just go and get it for … breakfast since I did not gave much of a breakfast anyway.

There are about ten Garrett Popcorn stores in Chicago with some of them in the airport. When I went to the one in The Loop, I was taken aback that there are actually some people lining up outside the store to buy popcorns. Whoa!

It wasn’t a long line and you get served very fast. The moment I walked into the store, the smell was very nice.

Garrett Popcorns had been in business for about 50 years already but always in Chicago. Even today, they only have one store outside of Chicago. 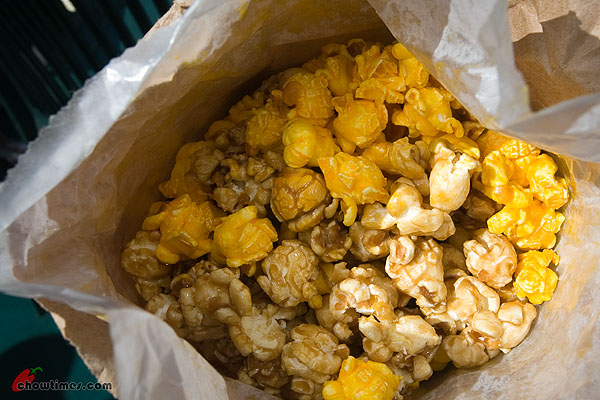 If you think that Garrett’s Popcorns has lots of flavours, don’t. All the flavours that matters are just two … and only two. The hero flavours are … the Caramel Crisp and Cheese Corn. The best is to have it mixed – I had it mixed all the time. They have other flavours but people just ignores them.

I can’t remember exactly how much a small bag is. I think it is about $3 or so. During the course of my days in Chicago I had quite a lot of bags … my backpack always has a bag in it. But they are quite expensive really. If you buy it from their website, the cheapest tin is $26 and it ranges up to $189!! Although you can have it shipped to you but you really want to eat it freshly made in the store.

You really have to try it to know what I mean. Until today, none of the popcorns I had tried in Vancouver is anywhere near the goodness of Garrett’s.

It is that perfect combination of sweetness and saltiness that makes Garrett’s Popcorns that special. Each popcorn is coated evenly thick.
I know now why Camille exclaimed “Garrett! Garrett! Oh my God! Oh my God! You have to try it”.

I bought a tin of Garrett’s Popcorns to bring home for Suanne and the boys. The tin was all finished within hours.

Chicago: Can’t Decide What To Do!

Chicago: Getting Around on The “L”