It is always great to meet up with friends who I had never met for a long time.

It must have been at least 15 years since Dennis and I last met. It is good to know that despite not keeping in touch for so long that I am still remembered. Dennis and I were active members of the Mensa Society, the so-called 98% percentile high-IQ group. I enjoyed those days volunteering in the Mensa Society where I had a small role as the National Assistant Secretary. I remember spending nights at the society office mailing hundreds of newsletters and lugging all of them to the Post Office. That was my “night job” — just like chowtimes is now my “night job”.

Dennis was visiting Vancouver together with his wife and father in law who was here f0r a symposium.

I suggested that we meet up in an easy to find location seeing that Dennis and family is not too familiar with the city. Moreover, I wanted to bring him to a place where the food is good and what better place than a place where they won a CRA award. So, we met for dinner at the Northern Delicacy in the Aberdeen Mall in Richmond.

It was a long time since Suanne and I last dined in Northern Delicacy. It was three years ago. Wow, how time flies. Looking at that post three years ago, I can see the difference in how I wrote then compared to now. Back then, the meals were simpler and the blog posts were much shorter. I guess I have gotten more long winded as I get older.

Service is exceptional in the Northern Delicacy. It is certainly a class above others for a Chinese restaurant.

Although Northern Delicacy is a Shanghainese restaurant, it is owned and operated by a Malaysian group. Not many people know that it is owned by the same people behind the Tropika Malaysian cuisine restaurants.

The interior decor is pleasant and tastefully done. They have a private room (see picture above) that has a heavy traditional wooden door mounted on glass walls. That room sure is classy. I wonder what it takes to have dinner in that room. 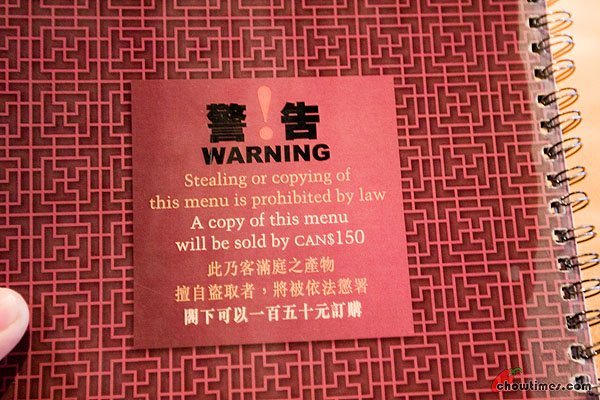 They have one of the best menus that I had ever seen with quite a number of signature dishes. So it is no wonder this restaurant won two awards in the CRA’s Critics Choice.

It is certainly a work of art and they are very protective of it.

I normally would take pictures of the menu but I dared not even dare to ask this time — lest I be billed $150 for it. 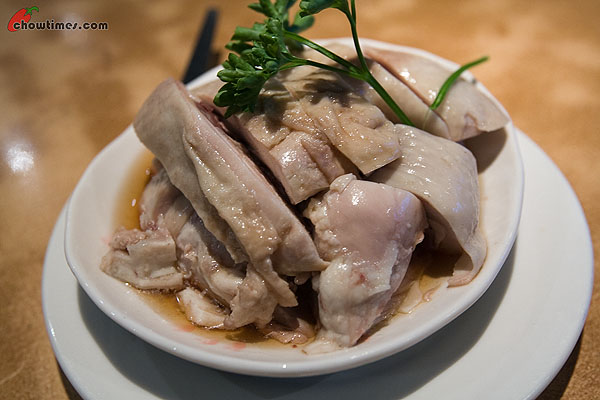 There were a lot of catching up to do. We had the whole night and I decided that we should just go slow and not order everything at one time.

We started off the appetizers with Marinated Wine Chicken ($6). The chicken was plum and the juice (wine) delicious. The only thing is that it is too small a serving for the five adults and one child. We all basically have two pieces each.

We had to get Xiao Long Bao ($5) in a Shanghai restaurant. The dumplings at least looked nice but that’s basically was it. There were hardly any soup in it and the skin is not thin. I had tasted much better ones.

This time we were better planned. We knew now that some of the restaurants do not know the name of the dishes in English. So this time we were armed with the Chinese version of the CRA Critic’s Choice list. And it was a good thing we did.

This is because … they do not have the Silver award winning Sizhi Tofu Dumpling (西施豆腐餃) on their menu. The waitress was not sure about it and had to take our list to the chef to ask. She came back and told us that the sifu chef can make it for us.

The Sizhi Tofu Dumpling is $14.

This dish is a very delicate dish. The waitress was fumbling with serving it because it breaks up so easily and the spoon she had was too small for the task. We had a good laugh at this but she was more embarrassed and unnecessarily apologetic.

This is a vegetarian dish with pea shoots, mushroom, bean curd sheet and tofu. It is innovative in how they present it and it tasted good.

Their other award winner dish is also a tofu dish. This is called Nanhua Tofu 蘭花豆腐 ($6).

On hindsight, we should have ordered this for one of the cold dish appetizers as it is meant to be. We thought it was something really special but this is just marinated dried tofu.

We got to hand it to them though. Their dish presentation was pretty and the tofu is cut into a flower shape. 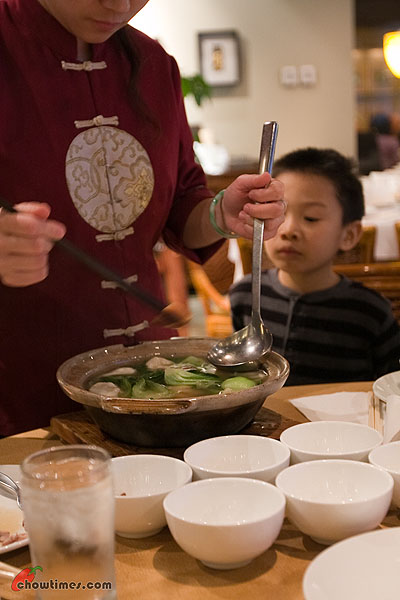 Like I earlier said, service here is great. The waitress painstakingly picked each ingredient from the soup so that each bowl have the same proportion.

We had the Chicken and Wonton in Soup ($14.50). It came in a hot pot and in it are also ham and bok choy. The chicken soup is good and has very deep flavour.

The Free Range Chicken Smoked with Rose Tea. This is $14 for half chicken. The skin was crispy (good) and the meat was a tad too salty for my liking.

See what I mean? Their dishes is so pretty. This is called Sauteed Egg Whites and Seafood with Broccoli ($16). I thought the raw egg yolk topping the egg white was a a nice touch. 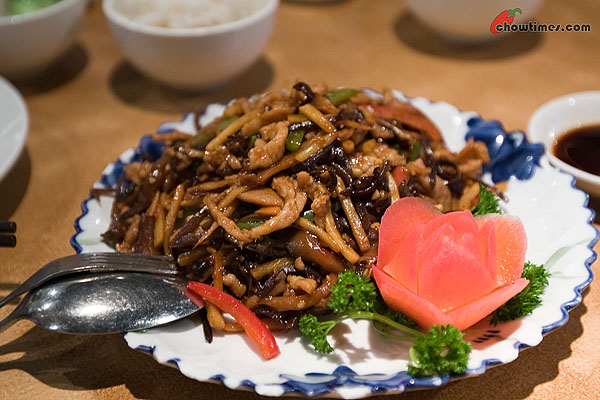 Lastly we also had the Shredded Pork in Fish Flavoured Sauce ($11). As simple as it looked, it was flavourful and was good with steamed rice. There are more of other stuff (slivered bell peppers, wood ears, mushroom and ‘jar choy’) than pork, so the name of the dish is a bit of a misnomer. I thought it was more pork-ier. 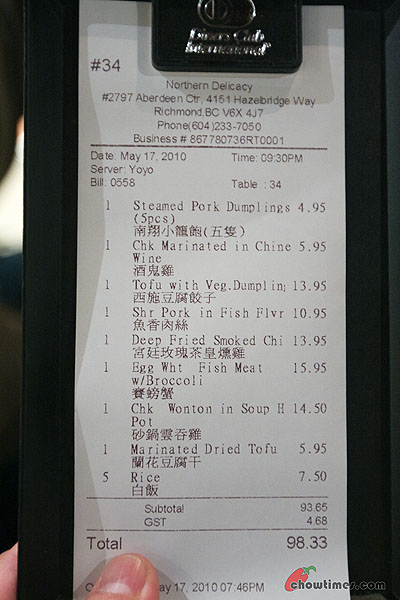 Overall, the prices is reasonable given the ambiance and the service. Well, I must say that we dined on a weekday night and the restaurant was half empty. So I can’t vouch for the service on a busy weekend afternoon where I had seen lines of people waiting for a table.

Their dishes are definitely pretty and well presented.

Suanne and I had a great time chatting with Dennis, Huey Yan and Dr Ooi. We stayed until we were the last customer in the restaurant and they had to come to tell us they are closing.