Suanne is so tired of asking me to finish off writing the our “cultural and gastronomic” vacation to Spain last summer that she doesn’t say it anymore. She just bump the drafts of these posts right up to the top of the queue just to remind me, it’s there.

Last summer we had a great time in Spain. “Last summer” as in 2009, not 2010. We toured three cities. Barcelona, Seville and Madrid. That trip opened our eyes to the Spanish culture and how the world could have been different today if the English Armada did not destroy the mighty Spanish Armada … o de otra manera estaría escribiendo esto en español.

We started off in Barcelona the Barcelona series here. There was not a lot of planning on our part for the trip. I was so busy at work that I only got to think about this a couple of days before leaving Vancouver. Yeah, that created a bit of anxiety on Suanne part.

We made the trip using the company’s travel passes which is one of the best perks I had. The trip costs less than $500 per person and it included flights and hotels too. Can’t beat that, can you?

Without a lot of planning, the first leg of the vacation was more than we bargained for. We went up the Christopher Columbus Monument that marks the very spot where Columbus made his triumphant return from the New World and was officially greeted by Isabel and Ferdinand.

It was a total unexpected bonus to learn that the Tour de France had a stage ended in Barcelona on the second day we were there. Many years ago I was an avid cyclist and ride to work almost everyday. I also followed the Tour de France every July on TV. So it was a dream come true to catch not one but TWO stages of the Tour.

Yeah … I got a fleeting glimpse of Lance Armstrong!

Our jaws dropped at the magnificence of The Sagrada Familia. I had been to many many churches and cathedral throughout the world but this one is just simply the best. Gaudi started building this in the year … 1882 and after 130 years, the end is in sight. At the rate it is going and with the help of technology not available back then, I am sure The Sagrada Familia will be completed in my lifetime.

When it is completed, I would like to pay another visit to this architectural marvel.

The works of Antonio Gaudi is everywhere in Barcelona. We visited several of his masterpieces all over the city and went away feeling astonished at the complexity of his architectural designs. I don’t think there will be another architect like Gaudi anymore. He is the one and only.

And guess what. I stood next to Megan McCormick taking shots of Gaudi’s Casa Mila and I did not notice it until Suanne whispered that out to me. She looked so pretty but I was too stunned to look at her eyes and introduce myself. Yeah, I kicked myself for not saying … “Hi Megan. I love your show. I am Ben of Chowtimes”.

We also took a train to the outskirt of Bercelona to visit the Montserrat. This is the site where the Black Virgin was and thousands of people come here to pay pilgrimage to it. It was an agonizing waiting in like for 2 hours just to be able to spend 15 seconds touching the Black Virgin.

Much of the greatness of Spain during their golden years are because of their maritime history. They are the first to discover the New World and the Spanish Armada ruled the seas back then. So we had to visit the Maritime Museum. I had a great time there and it is here in this museum that I discovered the roots of the rich culinary heritage of Spain.

It was the Spanish who brought food from the New World which today we take for granted. It is at this museum that I learned potatoes, tomatoes, bananas, corns, chili, among many many others was only native to South America until Columbus introduced it to Europe and subsequently to the rest of the world.

Gastronomy-wise, we had a great time in Barcelona. We made several attempts to snag a last-minute table at El Bulli (the best restaurant in the world) and we almost did that. After a few days of calls to them, el Bulli told us to drive 100 miles to their restaurant in the middle of nowhere and wait by 3PM before they tell us if they can seat us. They did not commit to us the availability and we did not want to spend one full day getting there not knowing if we will get to dine there or not. Anyway, we managed to dine at an el Bulli restaurant (later down this post).

In Barcelona, we tried the “Best Sandwich in The World” … as declared by the New York Times. It was OMG-good. We got this from the Viena Cafe on La Rambla and ate it at the top of Montjuic overlooking Barcelona.

We ate well at a great restaurant called Alkimia. It was one of the best meals we ever had. Very unique, very Catalan. Alkimia serves what they call contemporary Catalan cuisine. The 12 course meal was about $250 Canadian for two. Quite pricey but it was absolutely marvelous. Check out the post here. 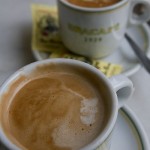 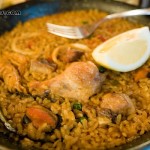 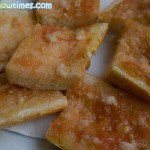 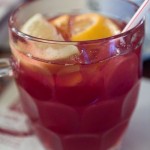 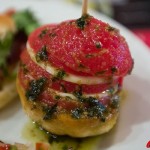 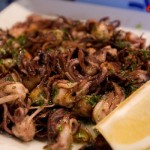 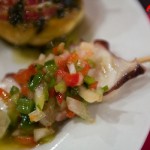 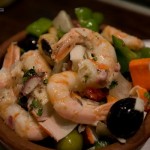 We had a lot of tapas meals too. They have such a bewildering selection everywhere but there was only so much we could eat. The best experience we had was at the smaller tapas bars that is outside the touristy areas.

If there is one item we learn to love a lot was the Pam Amb Tomaquet. We love the freshness of the tomatoes and we had that virtually everyday for breakfast … along with a cup of cafe con leche.

After a week in Barcelona, we flew to Seville. It was here we get culture shock. Unlike a big metropolitan city like Barcelona, Seville is a smaller city where not everyone speaks English. So we had a bit of a difficulty around here.

We visited the magnificent Cathedral of Seville which is also the site of the tomb of Christopher Columbus. I love this cathedral which is so steeped in history.

In Seville, we learned a lot about the Reconquista. It was the period where the Christian kingdoms drove out the Muslims from the Spanish peninsular returning Spain to being a Christian nation again. There are still a lot of relics of those era when the muslims ruled the area which is so evident in the architecture from those times.

We were totally sapped of energy when we were in Seville. The city is unbearably hot where the temperatures hit 40C.

I remember we stopped by the Plaza de Espana and just sat there for a long while under the shades of the tall corridors and not wanting to move. This is the spot where they shot the scene of Naboo on Star Wars Episode II.

Yeah, we went to see a bullfight in Seville. We had never been to one all our lives nor paid any attention to any of this on TV and what nots.

We were shocked with the brutality of this blood sport which is also an integral part of the Spanish culture. This post generated a lot of controversy as can be expected. I won’t pass judgment as to the rights and wrongs but personally after seeing what I saw, I will not wish to see this again.

During the bull fight, a matador was knock unconscious and was gored very badly below the jaw. I caught that scene on camera but be warned … it is on this password protected post and if you want to look at it, the password is iagree.

The meal of the entire trip to Spain is at the La Alqueria in Seville. This is a Michelin 2 star restaurant which is the closest to having a meal in el Bulli. The La Alqueria is an el Bulli restaurant which serves the best of previous years items from el Bulli. You can guarantee a meal in this restaurant only if you stay in the 5 star resort it is located in (room rate starts at 400 Euros per night!). We managed to snag a table for two despite not being a guest of the resort.

Molecular gastronomy at its best! We enjoyed the meal tremendously but very pricey. This is the most expensive dinner that Suanne and I had in our lives up to this point.

It is in Seville we had more of “toothpick tapas” … just like the way it traditionally it. It is much cheaper too than in Barcelona.

In the hot weather in Seville, we also had a lot of Gazpachos. Very nice and very refreshing. This is one dish that I can find that it close to how they make it in Spain.

After 10 days in Barcelona and Seville with some great eats, we journeyed next to Madrid.