Ben was craving for Malaysian food. We went to John 3:16 Malaysian Delights since Ben had not been to this restaurant before. The verse John 3:16 adorns the wall inside…

This is our third attempt to look for the Penang Delight Cafe at the Marpole area.

Apparently, it is located in a very small strip mall on W73rd Ave. Parking is limited.

A wall is decorated with photos of the menu item. This is good for customers who are not familiar with Malaysian cuisine.

Another wall is decorated with photos of Malaysia tourist highlights and also some antique photographs.

Ben has no problem with the ordering as he has been craving for nasi lemak lately. He ordered a Nasi Lemak Rendang Lamb for $13.95. END_OF_DOCUMENT_TOKEN_TO_BE_REPLACED

I met up with 3 of my girl friends at John 3:16 Malaysian Delights for a quick dinner before we take the Canada Line downtown to the Rogers Arena for a Night of Hope with Joel & Victoria. The restaurant was opened recently and we all like Malaysian food.

The restaurant is quite small with a few tables. The owner of the restaurant previously ran the Malaysian stall at the entrance at the Richmond Public Market.

Since we were at a rush, we just ordered fried noodles from the menu. The above was recommended by one of my girl friend who had dined here before. It’s a fried vermicelli Malaysian style. We can taste the flavour of egg in it. END_OF_DOCUMENT_TOKEN_TO_BE_REPLACED

How often do you hear of price rolled back for restaurant?

When Ben drove past Kedah House Restaurant on the way to Crystal Mall a couple weeks ago, I noticed Kedah House buffet sign board displaying the old price of $9.99. The buffet price was increased to $12.40 for a while; at least since our visit in last August till January this year.  We decided to go for our comfort food on Good Friday since the price has gone back down. Nasi Minyak with Beef Rendang and a chicken dish. END_OF_DOCUMENT_TOKEN_TO_BE_REPLACED

Arkensen needed us to drop him at school to return a lot of library books and to complete one of his lab work with his partner. After dropping him off, Ben decided to go to Crystal Court for lunch.

Finally, I got the chance to try the Ipoh Bean Sprout Chicken stall. At previous visit to this food court, there was no tables available. It was not easy to get a table this time but we managed to find one.

I ordered the Hakka Pan Mee which is handmade noodle  with ground pork, fried anchovies, shiitake mushroom and some fried tofu skin.

The noodle was al-dante (a little chewy) and it was good enough for my craving after not having this dish since my last visit to Malaysia. END_OF_DOCUMENT_TOKEN_TO_BE_REPLACED

Ben decided to surprise the family with a Malaysian meal on a Friday evening on his way back from work.

We had noticed a new Malaysian restaurant on No. 5 Road a short while ago. When I checked it out on Urbanspoon.com, I noticed that it only opens in the evening. We usually eat out for lunch on weekend, so, we have not check this place out until now.

Apparently, Sambal Coconut Malaysian Szechuan Cuisine only caters for take out only. There is a 10% off for pick up with some conditions applied.

The above is Mee Goreng for $8.25. It has beef, egg, shrimp, tomato, bean sprout, choy sum, cabbage and tofu. This was slightly sweetish.

Fried Kuey Teow is $8.95. This was slightly spicy and sweetish also, with shrimp, fish cake, squid, bean sprout, egg and chives. Nanzaro commented that the serving was relatively small compared to the one he always get from V’s Malay & Thai Food in the Richmond Public Market for $7. END_OF_DOCUMENT_TOKEN_TO_BE_REPLACED

Continue ReadingTake Out from Sambal Coconut Malaysian Szechuan Cuisine on No. 5 Road

I had to pick up my passport from the Chinese Visa Office on W. Broadway. I took the opportunity to have lunch at Kaya Malay Bistro just a few doors a way.

I invited Lorna to join me as she loves Malaysian food too. Kaya is a Malay word which means rich. It is also the Malay name for coconut jam. The server brought a sampler of guava soda for us to try.

We ordered an Appetizer Sampler plate to try. The appetizer for one is $8. It came with 3 sauces, sweet chili, peanut and curry. The curry sauce was very rich in coconut flavour. END_OF_DOCUMENT_TOKEN_TO_BE_REPLACED

When I was running some errands in Vancouver with Nanzaro, I stopped by City 1 Cafe for lunch.

City 1 Cafe is a Malaysian restaurant.

The menu is not big. You can click on the menu to have a larger view. We were there just after 11:30am. The restaurant was pretty empty. But, half an hour later, more customers drop in for lunch. This restaurant seats 26.

When we visited Pho Han, we put a long forgotten hole in the wall restaurant, Prata-Man back in the our places to visit. We had visited it when we were new to the city. That was more than 10 years ago. We over heard the server telling a customer at the table next to us that Prata-Man has been in business for more than 20 years. It was a Saturday that we came here. Only Arkensen came with me because Nanzaro wanted to watch a winter classic alumni hockey game that afternoon.

Prata-Man served Singaporean cuisine which is very similar to Malaysian cuisine.  We noticed there were quite a number of Costco staff that came here for lunch because of it’s proximity to Costco in Richmond. There is hardly any decoration and even the tables and chairs are mix and match.

The good thing is they have menu with photos for easy ordering. Their menu is limited, less than 30 items. So, ordering is made simpler rather than some restaurants which offer 100 over items and making choices seemed so difficult. You can click on the photos to have a larger view.

Prata-Man also offers combo for 2 for eat in only from Tuesday to Thursday. It looks like a good bargain. You can click on the menu to have a larger view.

For appetizer, we ordered half and order of  BBQ satay. We ordered the mix version, i.e. 2 beef, 2 chicken and 2 pork to try. The half dozen satay costs $7.75. The BBQ satay is served with sliced cucumber, pickled daikon and carrot and peanut sauce. The peanut sauce is not as spicy as we are used to. But I like the chunky peanut texture. Of the three types of meat, I still prefer chicken which is more tender. END_OF_DOCUMENT_TOKEN_TO_BE_REPLACED

After 6 years of blogging, we had written over 2,200 blog posts. There are so many posts that s0metimes we can’t quite remember some of the places and recipes that we had bloged about before.

It was at this post where I blogged about Hawkers Delight. I thought it was a balanced and honest review. I said the food is cheap and tasty. I also said that the place is also not exactly clean.  The first time we got a comment like that, it did hurt a lot. Since then, we did get more such comments. The bigger chowtimes got, the more comments we get and along with it not all comments were positive. I guess this all came with the territory.

It is quite alright for people to disagree with chowtimes … but it is better to do so respectfully. One thing Suanne and I have always done is to make sure that we publish every comment even if it is negative. After six years, we have only thrashed six comments that we thought had grossly crossed the line and if we did that, we do announce that we had deleted comments. You can rest assure that we will never delete any comments even if it criticised chowtimes. 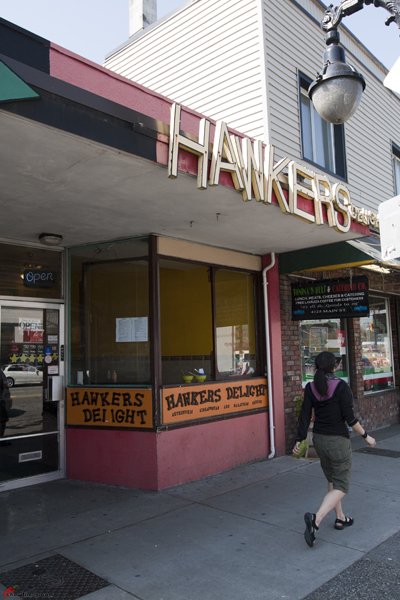 Hawkers is one of those restaurants that we had been back many times. It is just that we did not blog about it. We like it because it is cheap and most often than not, it is also good.

A few weeks ago, Suanne and I decided to have lunch in Hawker’s Delight and blog about it. After all, it was four years already since we last wrote about them. Time to refresh the content.

Hawker’s Delight is located on Main Street near the intersection with King Edward.

Hawker’s Delight is small. It seats less than 30 people and it is really cramped. The place had not changed much over the years.

Hawker’s is known for their … END_OF_DOCUMENT_TOKEN_TO_BE_REPLACED

Continue ReadingHawker’s Delight and a Day in QE Park