On one of the weekend when Ben was away, Nanzaro wanted to get some summer clothing like sandal and shorts as he had outgrown them. He knows how to get mommy to bring him shopping when daddy is not around. So, we ended up having lunch at Pho Hoa at Alexandra Road for it’s proximity to Lansdowne Mall. Arkensen agreed because he got to hang out at Best Buy while we go shopping for Nanzaro’s stuff. 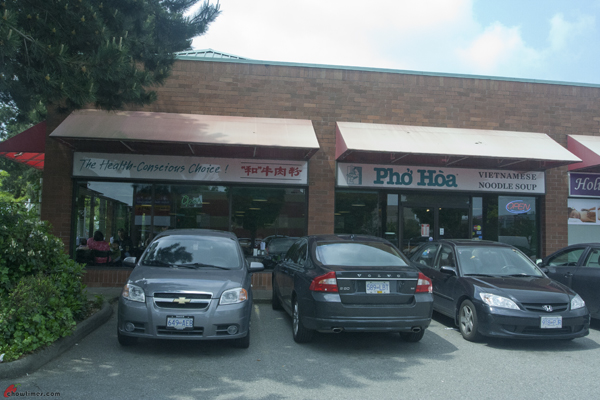 Pho Hoa is a franchise Vietnamese restaurant. It has locations in the USA, Indonesia, Korea, Philippine and Taiwan. 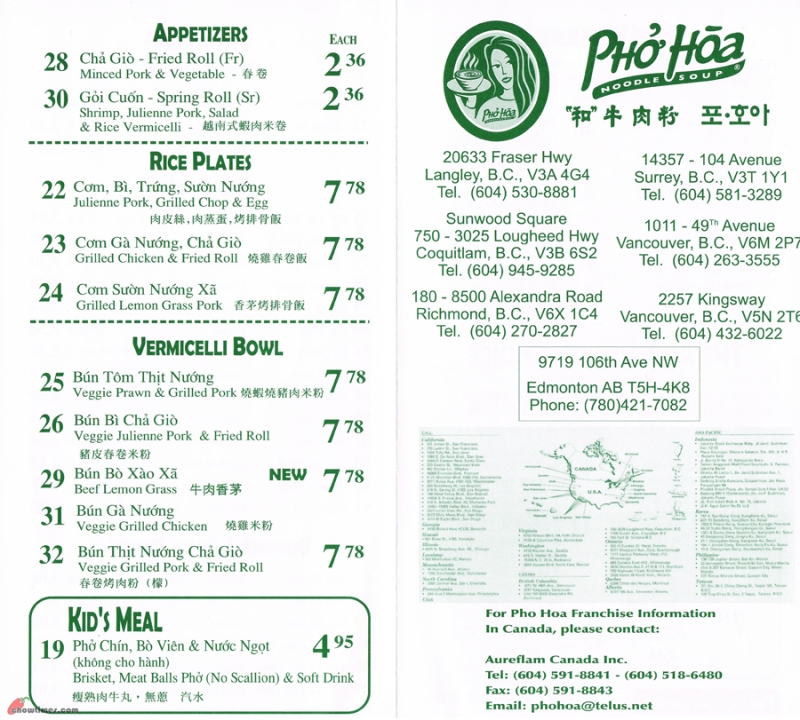 You can click on the menu above to have a better view of the franchise locations. We had blogged about Pho Hoa in the Bay area in 2007. 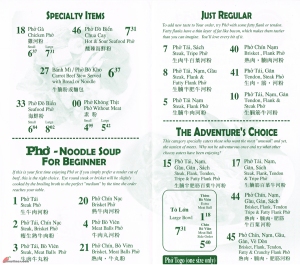 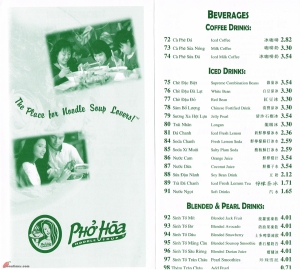 Pho Hoa is a very typical Vietnamese restaurant with the pho noodle soup, rice plates and vermicelli bowl. You can click on the menu to view it larger. However, I noticed that the take out menu they gave me is not up-todate in term of the pricing. Some of the items that we ordered is pricier than those on the take out menu. 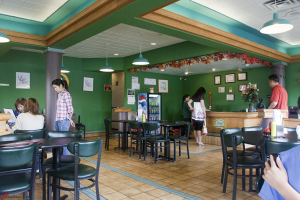 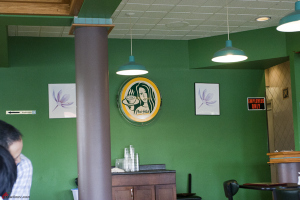 The Pho Hoa on Alexandra Road is big and spacious. It is very bright as two of the walls are in full glass as it’s a corner stall. They have two round tables that can cater for bigger groups. 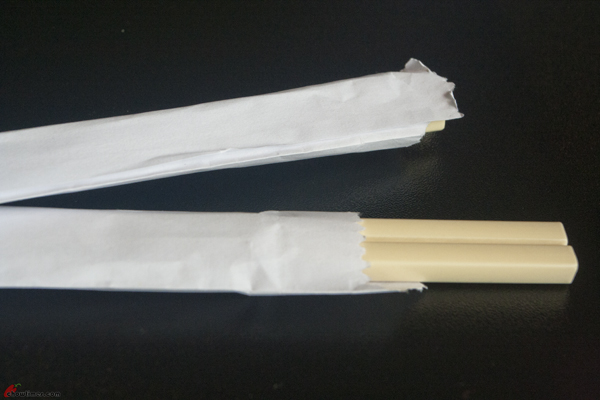 I like that they use plastic chopticks, rather than those one time use bamboo chopsticks. They store the chopsticks in paper wrapper which shows that they care about the cleanliness of the utensils. 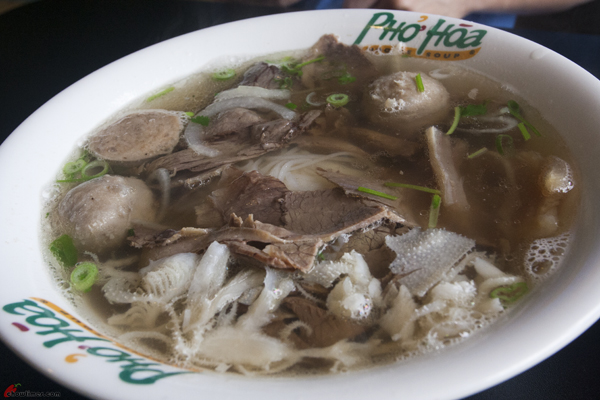 Pho Hoa’s inhouse menu has colour pictures which makes ordering easier. Arkensen ordered from the Adventure’s Choice Pho Chin, Nam, Gau, Gan, Sach which has brisket, flank, tendon, tripe and fatty flank. It is …
$7.81 for large. Arkensen also ordered extra meat ball for $1.18. However, it’s not worth the extra $1.18 as we counted only 3 half meat balls. 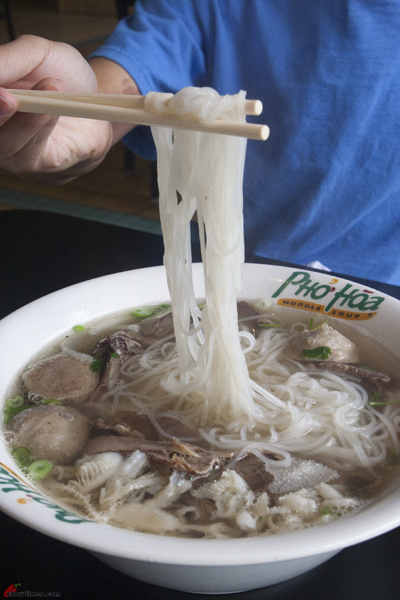 The pho is good with a tasty clear broth. 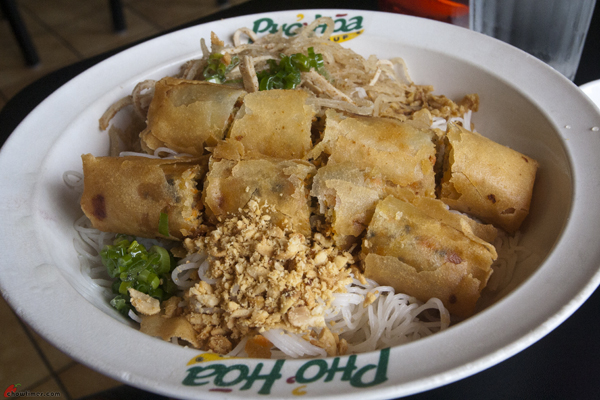 Nanzaro ordered the Bun Bi Cha Gio which is Julienne Pork and Fried Roll. This one costs $8.26. 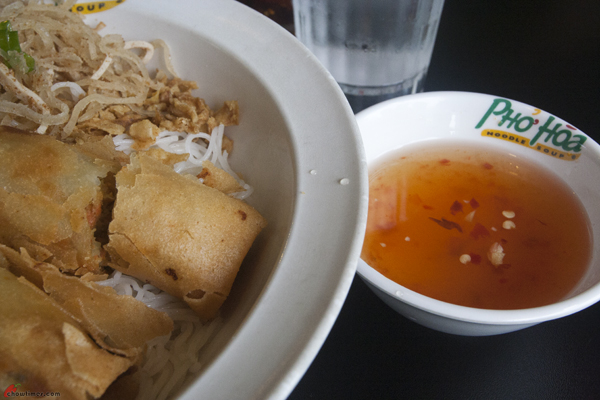 The Bun Bi Cha Gio is served with a Vietnamese fish sauce dipping sauce. Nanzaro only used the dipping sauce for his spring roll. 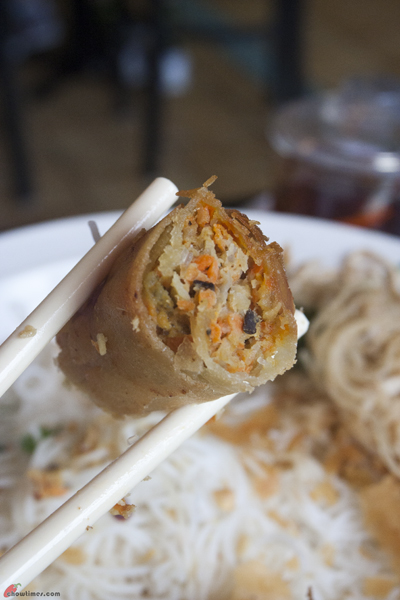 The deep fried spring roll is very crispy and has carrot, wood ear mushroom and pork. I had blogged about the Cha Gio recipe here. 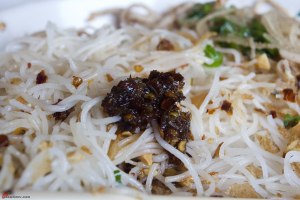 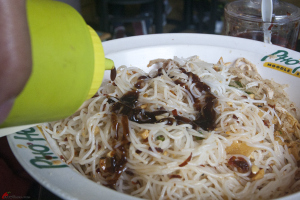 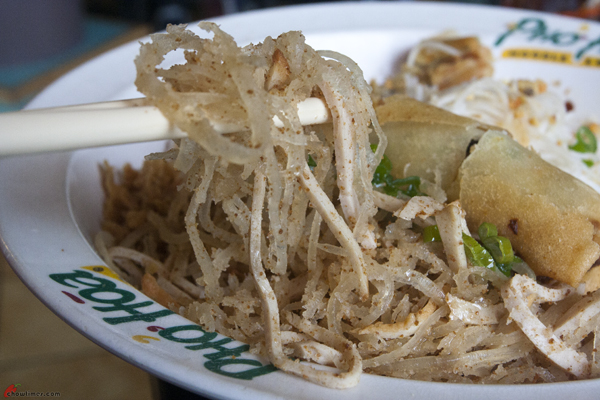 For Nanzaro’s dish, the julienne pork is served among some jelly like strands. Anyone knows what are those stuff? Anyway, there is not much of pork in it, mostly those jelly like stuff. 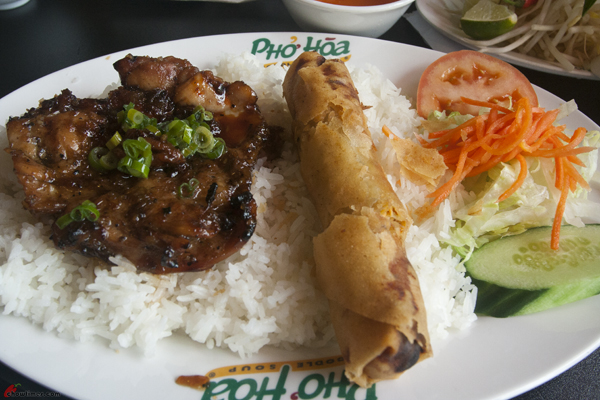 I ordered the Com Ga Nuong, Cha Gio which is Grilled Chicken and Fried Roll. This rice plate is also $8.26. There is salad on the side and a lot of rice in this plate. The grilled chicken is pretty good with some charring on the edges and juicy. 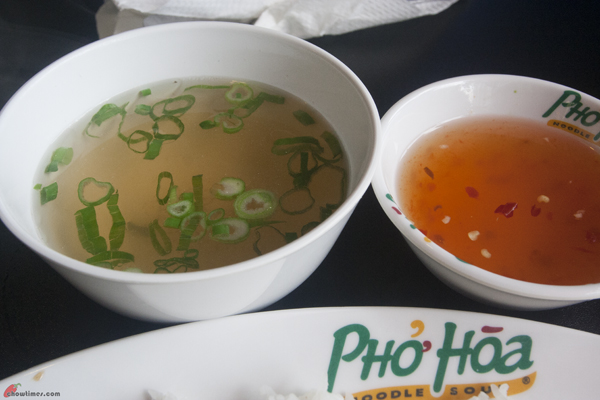 The rice plate comes with a bowl of soup and fish sauce dipping sauce. I wonder if the soup is ladened with MSG because I felt very thirsty after the meal. 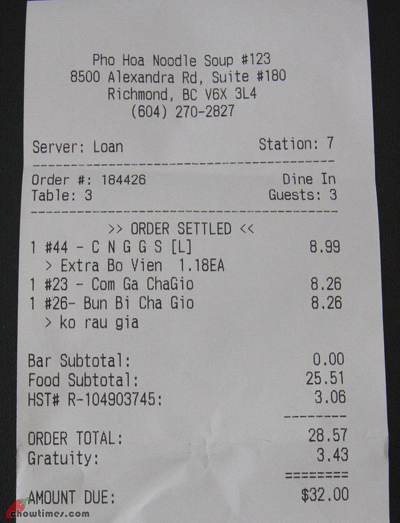 This is a very decent pho place. The good thing is Pho Hoa opens late.

May Vietnamese Cuisine in Richmond